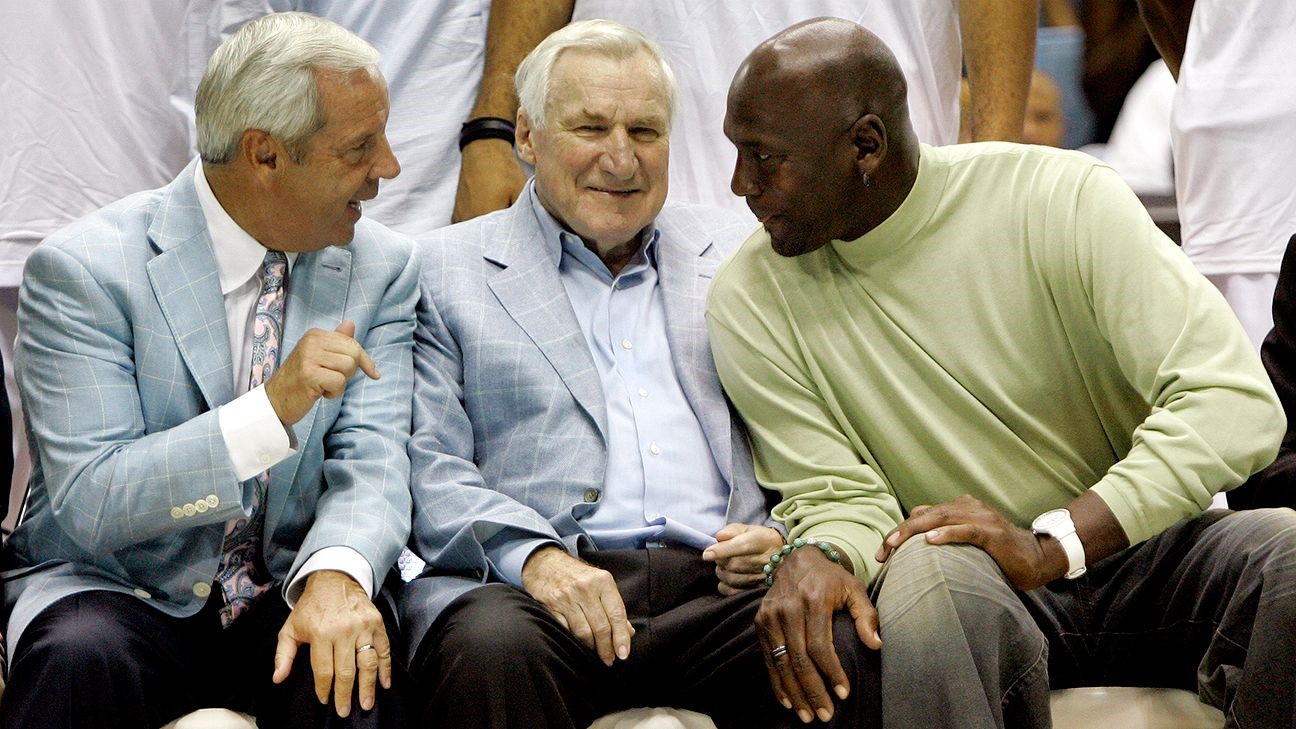 I’ve reposted this story for MLK Day. I wrote it for my former website a day after Dean Smith died, Feb. 7, 2015.

President Barack Obama bestowed the Presidential Medal of Freedom upon North Carolina basketball coach Dean Smith in a 2013 White House ceremony at a time I was in the process of researching and writing “Raye of Light.”

The moment reinforced in my mind how much Smith and Michigan State football coach Duffy Daugherty shared in common. In the athletic arena, they both won two national titles, Off the field they led their respective sports in the integration of college athletics.

Daugherty, I believe, also should be considered a candidate for the Presidential Medal of Freedom. Smith and Daugherty acted upon upon King’s belief, “Time is neutral, and the time is always right to do right.”

Those were words Martin Luther King Jr. spoke at Michigan State on Feb. 11, 1965 before a full house of 4,000 people at the MSU Auditorium. They are from his 1963 Letter from Birmingham Jail. King had been told by white ministers that he was pushing integration too aggressively and he needed to be patient, wait for the right time.

Michigan State president John Hannah, African-American professor Dr. Robert Green and Michigan State’s student government had invited King to campus. The night served as a fund-raiser for the Student Education Program, a student volunteer drive to support voter registration in Mississippi. Hannah, appointed in 1957 by President Dwight Eisenhower as the first chairman of the Civil Rights Commission, had pushed integration throughout his campus.

Michigan State’s 1965 team numbered 23 Black players and 10 Black starters and the 1966 roster 20 Black players, 11 Black starters, two Black captains and Jimmy Raye, the South’s first Black quarterback to win a national title. When Michigan State faced Notre Dame in the 1966 Game of the Century, the Irish had one Black player, Alan Page. In the 1960s, integrated schools still limited their rosters to a half-dozen or so Black athletes into the 1960s.

USC, for example, numbered only seven Black players on its 1967 national championship team, but the Trojans began to follow the Underground Railroad model down the tracks. USC picked up more Black athletes on its way its next national title, in 1972, wit 23 Black players.

Daugherty, like Smith, did not wait for alumni approval to recruit Black athletes to play for his teams, the excuse Alabama coach Bear Bryant used for dragging his feet on integration until 1971.

They later met Daugherty at a national clinic held in the South. Daugherty was upset the Black coaches were denied entry, and he put on a free clinic for them. Word spread among southern Black high schools that the coach that they had seen leading integrated teams on TV was a man they could trust with their players far from home.

It is important to remember that as late as 1965, Texas A&M coach Gene Stallings, a Bear Bryant protege, had said he didn’t believe Black and White athletes could get along in a locker room. In 1970, Texas coach Darrell Royal said he didn’t want to hire a Black assistant coach. He was concerned it would disrupt his locker room if white players didn’t want to play for a Black coach.

Daugherty’s teams were debunking such bigoted thinking with their rosters on the field and hiring Don Coleman in 1968, Sherman Lewis in 1969 and Jimmy Raye in 1972 as Black assistant coaches. Lewis and Raye went on to long NFL careers.

Southern Black high school coaches began contacting Daugherty, sending him their players. They trusted him to treat their players fairly. They laid the Underground Railroad tracks.

Other Big Ten schools had an alumnus steer a Black prospect their way, but Daugherty had a network from North Carolina to Texas. He recruited 44 Black players from the segregated South between 1959 and 1972, his final season upon retirement. The southern recruits graduated at a 68-percent rate in an era before the academic supports systems that are now in de rigueur in college athletic departments.

But an an unknown player also exemplified the Underground Railroad for its graduation rate of 68 percent. Clifton Roaf of Pine Bluff, Arkansas, was the first passenger in 1959. He suffered a knee injury in spring football of his freshman year and never played a down due to an injury. But he said he remained “indebted to the people of Michigan State” for his education. He returned home to 40-year career as a “a country dentist” to serve an underserved community.

Daugherty also did not wait to start Jimmy Raye of Fayetteville, N.C., at quarterback when African-Americans weren’t trusted to play the position.

Daugherty was coaching in the North out of the reach of Jim Crow laws, but so was Brooklyn Dodgers general manager Branch Rickey when he broke Major League Baseball’s color line with Jackie Robinson in 1947. Both of them received their share of hate mail from racists.

Daugherty also heard from bigots. He showed Raye some of the hate mail upon Raye completing his career.

Dean Smith also did not wait for the alumni to sign Charlie Scott as North Carolina’s first Black scholarship athlete. Scott, an All-American guard, was the ACC’s first Black basketball player in the 1967-68 season.

Below is an excerpt on Smith from Chapter 19 of “Raye of Light.” It includes a quote from New York Times bestselling author John Feinstein in his book, “One on One.”

“In 1958, Dean Smith was merely a 27-year-old first-year assistant basketball coach to University of North Carolina head coach Frank McGuire when he challenged segregation at a popular restaurant in the UNC campus town of Chapel Hill. Smith told the story for the first time in his 2002 book, ‘A Coach’s Life.’

“Smith and Reverend Robert Seymour of Brinkley Baptist Church had a conversation about the need to do something to challenge segregation. Smith and a black theology student who was member at Brinkley Baptist sat down together at The Pines, a popular Chapel Hill restaurant. They were served without incident.

“ ‘You have to understand, Dean Smith wasn’t Dean Smith in 1958,’ Seymour told author John Feinstein in his book “One on One.” ‘He was an assistant coach. It wasn’t out of the question that management might have complained to the university and he might have gotten in serious trouble. But he never hesitated to do it.’

“Upon learning the story decades later, Feinstein writes he asked Smith to comment on his bold challenge. Smith declined. Feinstein encouraged him, saying he should be proud of the moment in time.

“ ‘You should never be proud of doing the right thing,’ Smith replied. ‘You should just do it.’

In other words, “Time is neutral, and the time is always right to do right.” Dean and Duffy shared the courage to do the right thing, to do it humility, to follow through without seeking attention or praise. They set an example for their coaching colleagues, Smith in the segregated South, Daugherty throughout college football.

In February 1958, Martin Luther King spoke before a full house of white and Black citizens at historic Broughton High’s 1,300-seat auditorium in downtown Raleigh. MLK’s words from that day can be read in the Broughton gym lobby:

“The philosophy of segregation is directly opposed to the philosophy of Christianity and the philosophy of democracy,” King said. “It is a cancer on the body politic, and until it is removed our democratic health cannot be realized. I believe there are many more people of goodwill in the white South today than we see on the surface. I call upon them in the name of the Almighty God to stand up and make a courageous stand to make justice reality. The Christian Church has a great role to play … it must continue to make a stand.”

Dean Smith certainly deserved his Medal of Freedom, but his case makes me believe Daugherty deserves one, too. Duffy Daugherty and Dean Smith were two coaches who shared Martin Luther King’s dream.