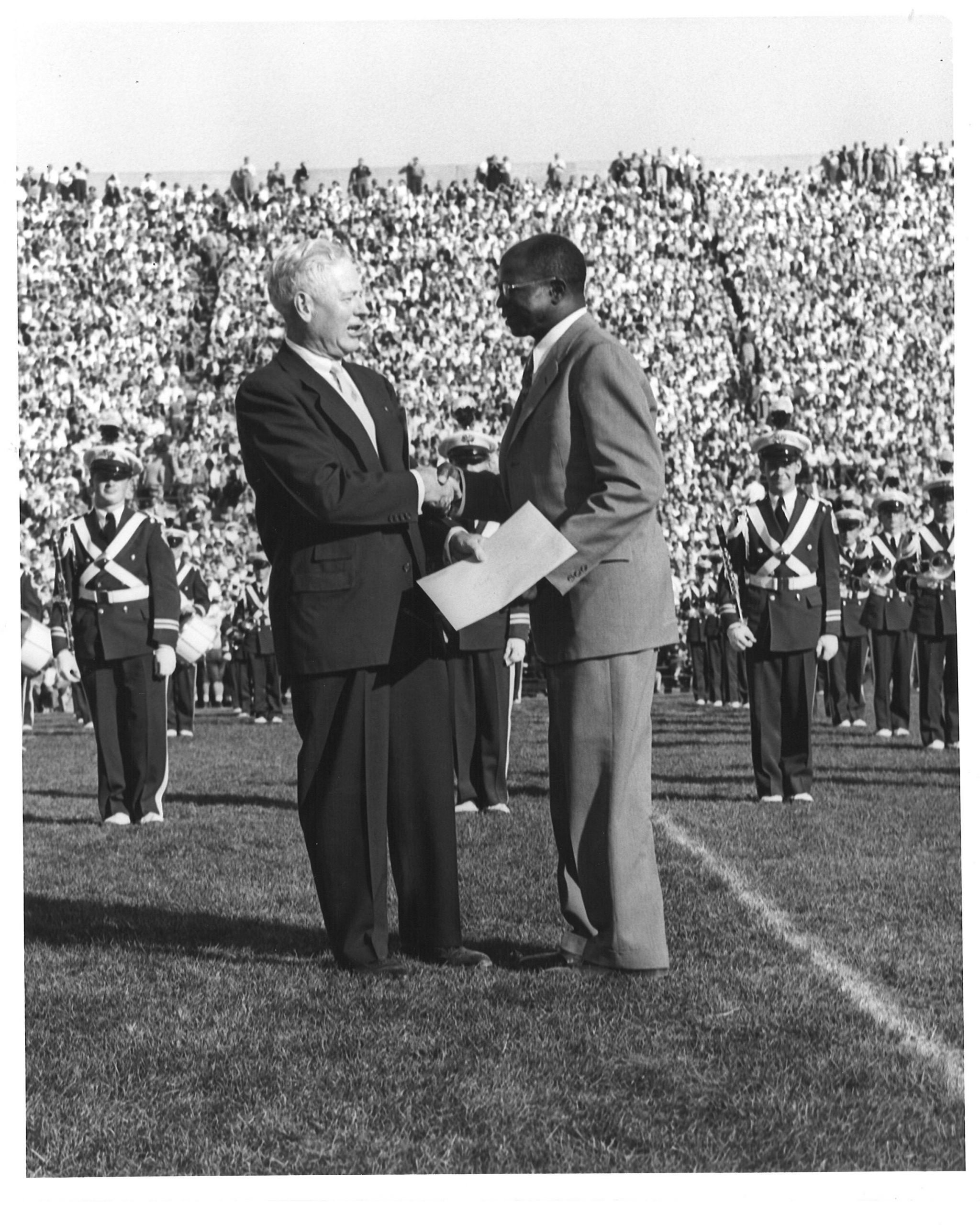 PHOTO (MIchigan State Archives): Gideon Smith was honored among his Michigan State teammates at halftime of a game in 1953 on the 40th anniversary of their unbeaten 1913 season.

Gideon Smith’s journey began in 1910 seeking education above the Mason-Dixon Line. The story continued while gaining acceptance through sports — first playing football in the north and later coaching it in the south.

His rich life, largely overlooked, has earned a third posthumous Hall of Fame celebration, this one from Ferris State University. It was delayed a year by the COVID-19 pandemic.

But what’s one year of waiting compared to a lifetime overcoming the human sins of racism?

Smith was born to former slaves in 1889, but his story continues to teach us what America can look like when it practices social justice and lives up to Thomas Jefferson’s words proclaiming equality.

Link to Gideon Smith story in my hometown newspaper, The Big Rapids Pioneer.

But what’s one year of waiting compared to a lifetime overcoming the human sins of racism?

Smith was born to former slaves in 1889, but his story continues to teach us what America can look like when it practices social justice and lives up to Thomas Jefferson’s words proclaiming equality.

“We will likely reconvene our Hall of Fame committee in the near future and then make a decision on how best to move forward,” Rob Bentley, the associate athletic director of communications, said regarding rescheduling the 2020 Ferris Hall of Fame.

Smith found his way to the Ferris campus in 1910 and discovered his talent by 1912 on the football team. The story continued at Michigan State, 1913-15, where he again was his school’s first Black player. Then he graduated to teaching and coaching in his home state at Hampton, an Historically Black College and University, 1921 to 1940.

Ferris State’s stature, especially this time of year as an NCAA Division II power, can add to telling Smith’s story.

Smith’s association with Ferris began with an invitation from Woodbridge Ferris, who founded Ferris Industrial School in 1884. Woodbridge Ferris, whose life included serving as both Governor of Michigan (1913-1917) and a Michigan U.S. Senator (1923-28), extended the invitation to a group of students from Hampton, then known as Hampton Agricultural and Industrial School.

His offer was inspired upon reading Booker T. Washington’s biography, “Up from Slavery.” The working agreement provided education to transfer to a four-year school. Who knew one of those students included a man with untapped athletic talent?

Smith’s first hall enshrinement was 1992, when Michigan State honored his pioneering football career, 1913-15. He was the school’s first Black player who led the Spartans to their initial two wins over Michigan, in 1913 and 1915.

His second hall induction was 2009, when Hampton enshrined him. He was Hampton’s head coach 20 seasons, winning a Black national title in 1922, five conference titles and overall record of 97-46-12. He later served as an assistant athletic director.

Smith’s name also can be found at the Pro Football Hall of Fame as part of a display recognizing the pro football’s first Black players. He is considered the third African-American while playing for the Canton Bulldogs in 1915. One of his teammates was Jim Thorpe of 1912 Olympics fame.

He has been on the ballot for the College Hall of Fame ballot since 2017 among Divisional coaches (essentially, schools that aren’t in what is now known as the Football Bowl Subdivision).

But attracting votes for a career that played out during segregation isn’t easy. How many 21st-century voters understand the significance of his coaching career? Not to mention his journey.

Ferris, though, could take bold step to bring attention to Smith’s overall career based on an idea Dr. Louis Moore recently espoused as part of a panel hosted by the Vanderbilt University Sports and Society program.

Moore, a professor at Grand Valley State University and author of two books on Black athletes, “I Fight for a Living” and “We Will Win the Day: The Civil Rights Movement, the Black Athletes and the Quest for Equality,” believes there should be a statue of the first Black player at every college campus.

“It’s a good place to start for schools to understand what really went on,” Moore said in a later interview. “At some places, why did it take so long for the first Black player? Other schools had a Black player in the 1890s but then not another for a long time. What happened with the gap?”

Athletic statues in videos are good stories to tell. These also can be Critical Race Theory stories to tell through sports – without the political football.

Woodbridge Ferris believed there should be a statue of Abraham Lincoln in every American town. It’s easy to think he would have endorsed Moore’s statue idea celebrating Gideon Smith’s multi-storied career.

My MSUings on Iowa and the remainder of the season