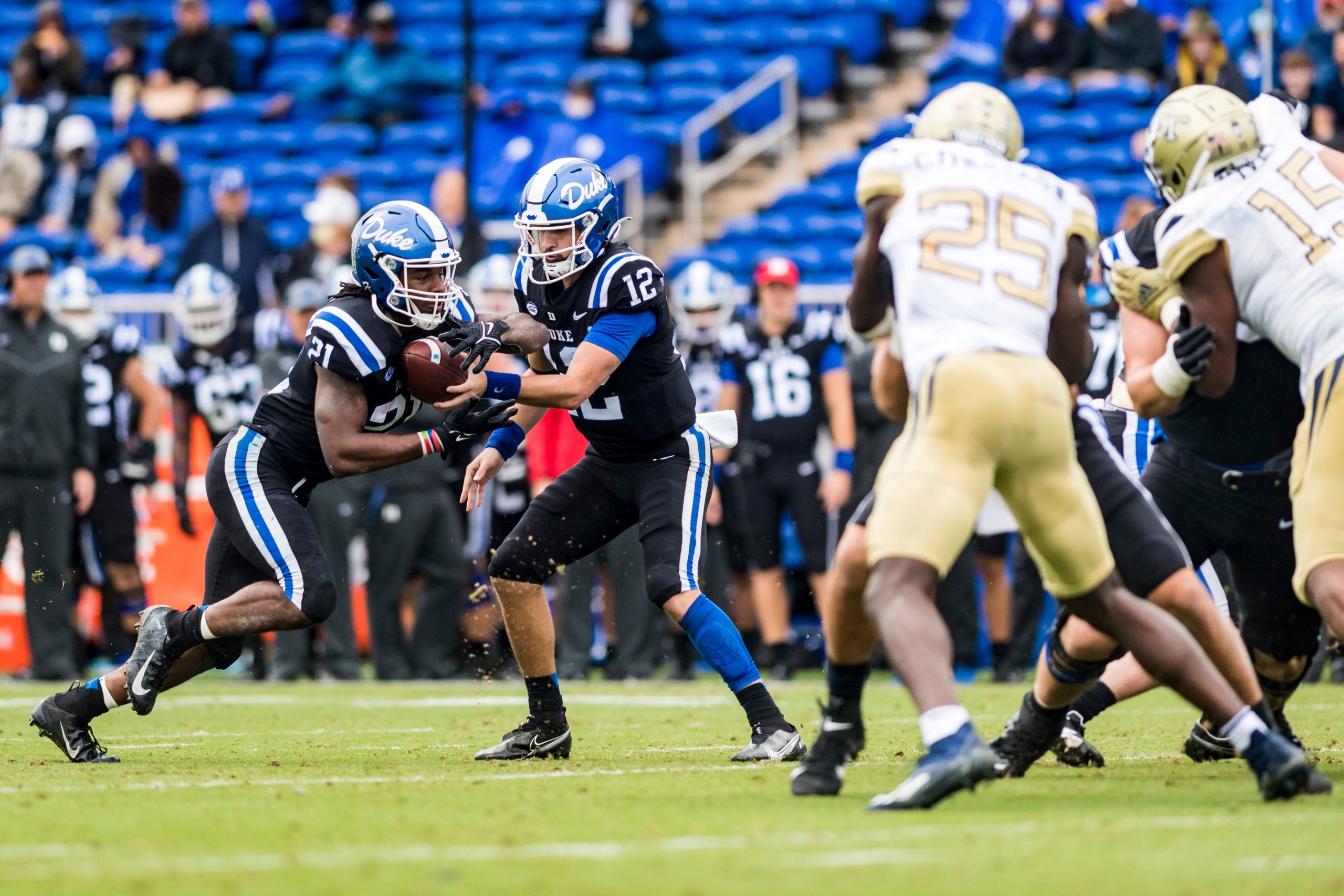 DURHAM – Duke football travels over North Carolina terrain known as the Piedmont foothills to Wake Forest, but the matchup presents the Blue Devils with a mountainous climb against an unbeaten, No. 13-ranked team leading the ACC.

Duke (3-4, 0-3 ACC Coastal) is coming off its third straight loss, including 48-0 at Virginia, entering the 4 p.m. kickoff Saturday at Truist Field in Winston-Salem.

The Blue Devils had a bye last week after yielding 528 yards in Charlottesville. Duke has been vulnerable to the deep ball all year, ranking last in the 14-team league in passing yards allowed per game (277.9) and total yards (443.3).

All those numbers lead to easy conclusions, but there are two other big numbers that stand out from the Army game. Army rushed for 416 yards and 595 total yards against Wake Forest. Duke’s offense is third in the ACC and 14th in the nation with 471.4 total yards per game.

“If you ask Mataeo, he gives more contact than he takes,” Duke coach David Cutcliffe said. “That’s one thing I learned early in this game that I tried to advise. I took the approach if I hit you harder than you’re going to hit me, it’s going to hurt you more. I promise you. That’s the mentality that guy has running the football.”

Another factor is Wake Forest will be without its second-leading tackler in the first half. Ryan Smenda, a junior linebacker, was ejected from the Army game in the second half for targeting. His hit knocked Army’s backup quarterback, Tyler Tyhier, out of the remainder of the game. Targeting ejections include the rest of the game and the first half of the next contest.

But there’s more to Duke’s opportunity to make a game closer than Wake Forest’s 16.5-point edge in Las Vegas.

Army’s option-oriented offense included 10-of-13 passes for 179 yards and three touchdowns of 21, 25 and 39 yards. Army’s quarterbacks don’t have the arm of Duke quarterback Gunnar Holmberg. He’s averaging 250.0 yards passing a game, completing 152 of 216 passes (70.3 percent) with six touchdowns and six interceptions. Also, the Black Knights’ receivers have a priority of blocking and aren’t as pass-oriented as Duke’s receivers or working from as expansive of a passing game playbook.

Although Wake Forest beat Army by 14 points, the teams traded touchdowns until midway through the third quarter. Army trailed only 35-28 as it drove into Wake Forest territory, but while facing a fourth-and-4 at Wake Forest’s 27-yard line the game turned.

The Black Knights trotted their kicker onto the field before quickly getting in formation and running a pass play from a backup quarterback. But Wake Forest’s Traveon Redd read what for a moment looked like a touchdown pass to an open receiver. He crossed in front of the pattern for an 83-yard interception touchdown return. Army never recovered.

For Duke, the challenge is proving mentally and emotionally they still believe they are better than a 3-4 team that lost 48-0 in its third straight defeat. Holmberg has said throughout the losses the Blue Devils aren’t the type of players to hang their heads.

“I think guys have stepped up,” Holmberg said of the bye week and this week’s preparation. “Guys that been quieter up until now have stepped up and become vocal leaders for us. Leonard Johnson has become a great leader. The more leaders you have on a team – especially from a well-respected guy who has played a lot of football here — I think guys respond better to hearing where their mind set is and the fight we have and the pride we have.

“I think it’s something were’ looking forward to doing. We want to show the fight in us no matter what the Virginia game showed. We know what we’re capable of and didn’t put our best foot forward.”