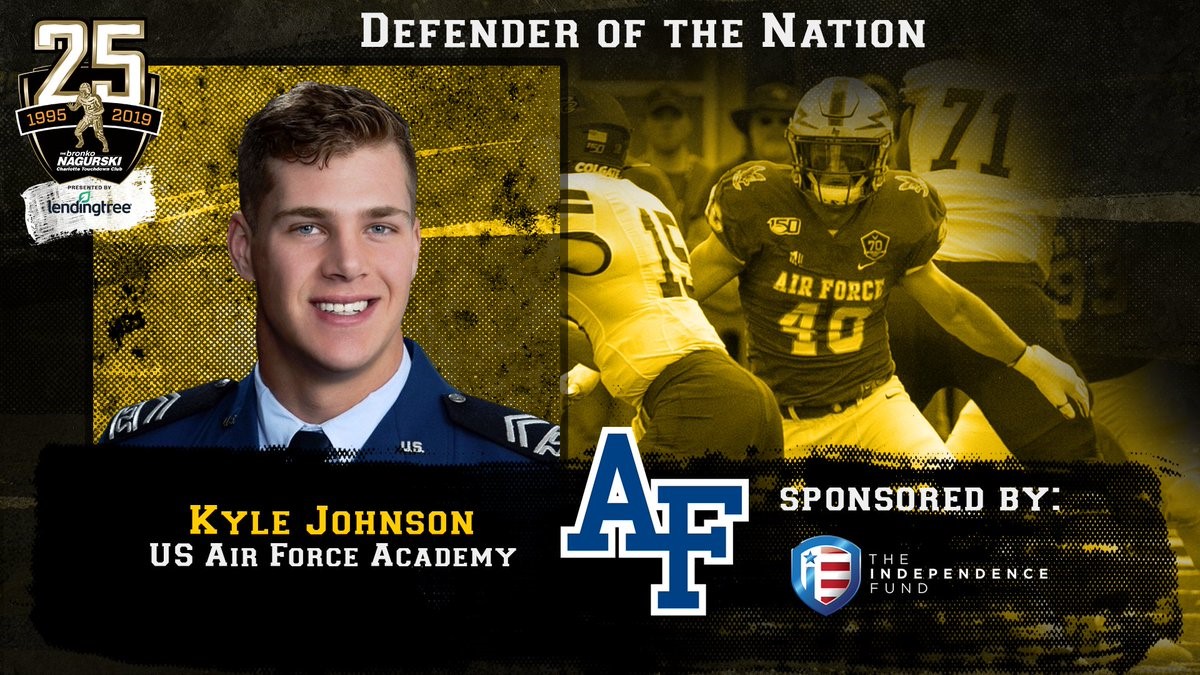 AFAN (Air Force/Army/Navy) stories: My series is about more than academy football players. These stories are about future officers selflessly committed to serving their country during a seemingly endless war on terrorism. There are only 0.5 percent Americans making up the military. Throughout our history Cadets and Midshipmen have answered the call to serve in times of war, but this is a generation of volunteers.

Thanks to the Charlotte Touchdown Club for its “Defender of the Nation Award.” College football needs a “throwback award” and that’s what this Charlotte award has represented since inaugruated in 2016.

The 2019 recipient is Air Force senior linebacker Kyle Johnson, who leads No. 24-ranked Air Force (10-2) into the Cheez-It Bowl against Washington State (6-6) on Friday at Chase Field in Phoenix. Johnson was honored on Dec. 9 alongside Ohio State defensive end Chase Young, the Bronko Nagurski Award recipient that the North Carolina group also presented before 1,2000 people at the Charlotte Convention Center.

“It was an awesome night,” Johnson said. “When they gave the awards, people were clapping for Chase Young; it was loud. But they also were loud for me. I was very appreciative of that from the people at the Charlotte Touchdown Club. The award is special to me.”

The Defender of the Nation Award honors a player chosen from one of the nation’s three military academies that play for the Commander-in-Chief’s Trophy, Army, Navy and Air Force, along with The Citadel, Coast Guard Academy, Norwich University, Virginia Tech, Texas A&M and Virginia Military Institute. The award is based on leadership qualities on the field, the classroom and in the community.

The Nagurski Award is for the nation’s top college defensive player. It invariably goes to an athlete from a Power 5 school or one that receives the most NFL draft speculation. Recent recipients were Kentucky’s Josh Allen, the seventh pick of last year’s NFL draft; N.C. State’s Bradley Chubb, fifth in the 2018 draft; and Jonathan Allen, the 17th pick of the 2017 draft.

Young, you have heard plenty about – and will as long as the Buckeyes are playing in the College Football Playoff.

He also was on the stage for the Heisman Trophy TV show o Dec.14 as one of four finalists along with LSU quarterback Joe Burrow, the winner; Oklahoma quarterback Jalen Hurts, the runner-up; and Ohio State quarterback Justin Fields, who finished third.

And that’s my point about Johnson’s award.

Other than the “Defender,” Johnson and academy athletes have virtually no chance to be a contender for any college football’s top awards. The Heisman Trophy, after all, is out of reach for the common man. The handful of candidates have such a commanding lead on name recognition, there isn’t much room left for worthy newcomers.

It wasn’t always that way. In the pre-Internet age, “Sports Illustrated” heavily influenced a candidate’s stock. And SI used its influence liberally — writers often introduced names outside the mainstream.

In SI’s Sept. 26, 1994 issue, the cover photo was Alcorn State quarterback Steve McNair with this headline: “Hand Him the Heisman.” McNair finished third that year to winner Rashaan Salaam of Colorado and Ki-Jana Carter of Penn State.

In the Nov. 10, 1986 issue, there was a five-page spread on Gordie Lockbaum, the 60-minute throwback at Holy Cross, written by Rick Reilly. Lockbaum finished fifth in the 1986 Heisman voting and third in the 1987 balloting.

In the Sept. 4, 1985 issue, Napolean McCallum was touted by SI writer Kenny Moore as a candidate after having finished sixth in the 1983 Heisman voting despite playing for a team with a 3-8 record. These days a 3-8 record gets you crossed off the list quicker than injuries.

By the end of the 1985 season, in the Dec. 2, issue, Reilly wrote Joe Dudek, a record-setting touchdown machine at Division III Plymouth State in New Hampshire, deserved attention.

Alas, Reilly noted a non-Division I player had never won the award. He cited Cornell’s Ed Marinaro broke NCAA rushing records but because he played at an Ivy League school finished second to Auburn quarterback Pat Sullivan in the Heisman voting.

The Heisman plaque states it is presented to the top college player in the country, but Reillly facetiously suggested it should read: “PRESENTED TO THE OUTSTANDING COLLEGE FOOTBALL BACK COMING OFF A GOOD YEAR WHO PLAYED AT ONE OF QUITE A FEW DIVISION I SCHOOLS THAT WIN BIG IN THE UNITED STATES.”

But Sports Illustrated is no longer the influential medium it once was in the ancient days of print and over-the-air TV and radio. In those days the drumbeat for Heisman candidates began with the start of fall camps. Now, cable networks and Internet website, beginning with spring football, have narrowed down the focus to even fewer schools and players. They are the ones in the hunt for the College Football Playoff. That’s open to only a handful of blue-blood programs that rake in Top 10 recruiting classes each year.

Yesteryear was the funnel narrowing many candidates. Today is a pasta strainer allowing a minimum names through.

If SI was still influential, it might have suggested Navy quarterback Malcolm Perry deserved recognition for his 2019 season. After all, Perry’s season was similar to Navy QB Keenan Reynolds in 2015. Reynolds defied the odds, finishing fifth in the Heisman voting and was named a third-team All-American quarterback. Don’t expect that recognition to be repeated anytime soon.

Perry’s 1,804 yards rushing ranks fourth in the nation and led the No. 21-ranked Midshipmen to a 10-2 record along with winning the Commander-in-Chief’s Trophy in the round-robin rivalry with Army and Air Force. A 2,000-yard season is possible since Navy has the Liberty Bowl against Kansas State, a Tennessee homecoming for the kid from Clarksville. The Liberty Bowl is Dec 31 in Memphis.

So why didn’t Heisman voters appreciate Perry in 2019 as much as they did Reynolds in 2015?

One reason was Navy bounced back from a 3-10 record last year. Perry didn’t start his senior year with the broad name recognition that Reynolds enjoyed.

In today’s Internet age, Perry was too far behind to shoulder his way into the picture among stars on teams contending for a CFP berth. That’s what makes the Defender of the Nation Award special.

“In resounding ways, Kyle Johnson is every bit of anything we could ever desire in a Cadet-Athlete at the United States Air Force Academy,” said Falcons head coach Troy Calhoun upon Johnson’s selection. “He’s physically and emotionally the toughest person you would ever coach, he’s an exceptional student, he’s an incredibly productive football player, and is as well respected of a teammate as one could have. The Charlotte Touchdown Club made a great choice for their 2019 Defender of the Nation Award in Kyle Johnson.”

I’ve long thought there should a “Heisman” for academy athletes. Perhaps title it the “Staubach-Dawkins Award.” Navy’s Roger Staubach, the most iconic academy football alum as a College and Pro Football Hall of Famer, was the last service academy player to win the Heisman (1963) and Pete Dawkins the last Army player (1958).

Or maybe the “Staubach-Blanchard Award” is apropos. An Air Force player has never won the Heisman, but Felix “Doc” Blanchard, the 1945 Heisman winner at Army, entered the Air Force rather than the Army. He was a fighter pilot, including flying missions in Vietnam. He also was later an assistant coach at Air Force.

Or maybe the “Staubach-Stichweh Award” is fitting. Staubach and Army’s Rollie Stichweh were rival quarterbacks — and subsequently lifelong friends — in the epic 1963 and 1964 Army-Navy Games that the two academies split. Their careers represent a dividing point in American history and sports.

Prior to the Vietnam quagmire and the rapid escalation of pro football salaries in the mid-1960s forward, athletes such as Staubach and Stichweh picked one of the academies over blue blood programs recruiting them. They also routinely played what are now considered Power 5 schools because they had the athletes to compete with them.

Today’s academy athletes, with their selfless commitment to serve their country during an endless war on terrorism, deserve a “Heisman-like” bookend to the Defender of the Nation Award. They receive attention at the Army-Navy Game but not enough the rest of the year. This year Navy and Air Force are both ranked. Army slumped to 5-8 in an injury-riddled season, but the Black Knights were ranked No. 19 in 2018.

If there was such an award in 2019, Malcolm Perry deserved it.

The Charlotte Touchdown Club is an ideal presenter located in a state with Fort Bragg (Army), Johnson Air Force Base, Camp Lejeune (Navy/Marines).

My MSUings on Spartans’ loss to Rutgers