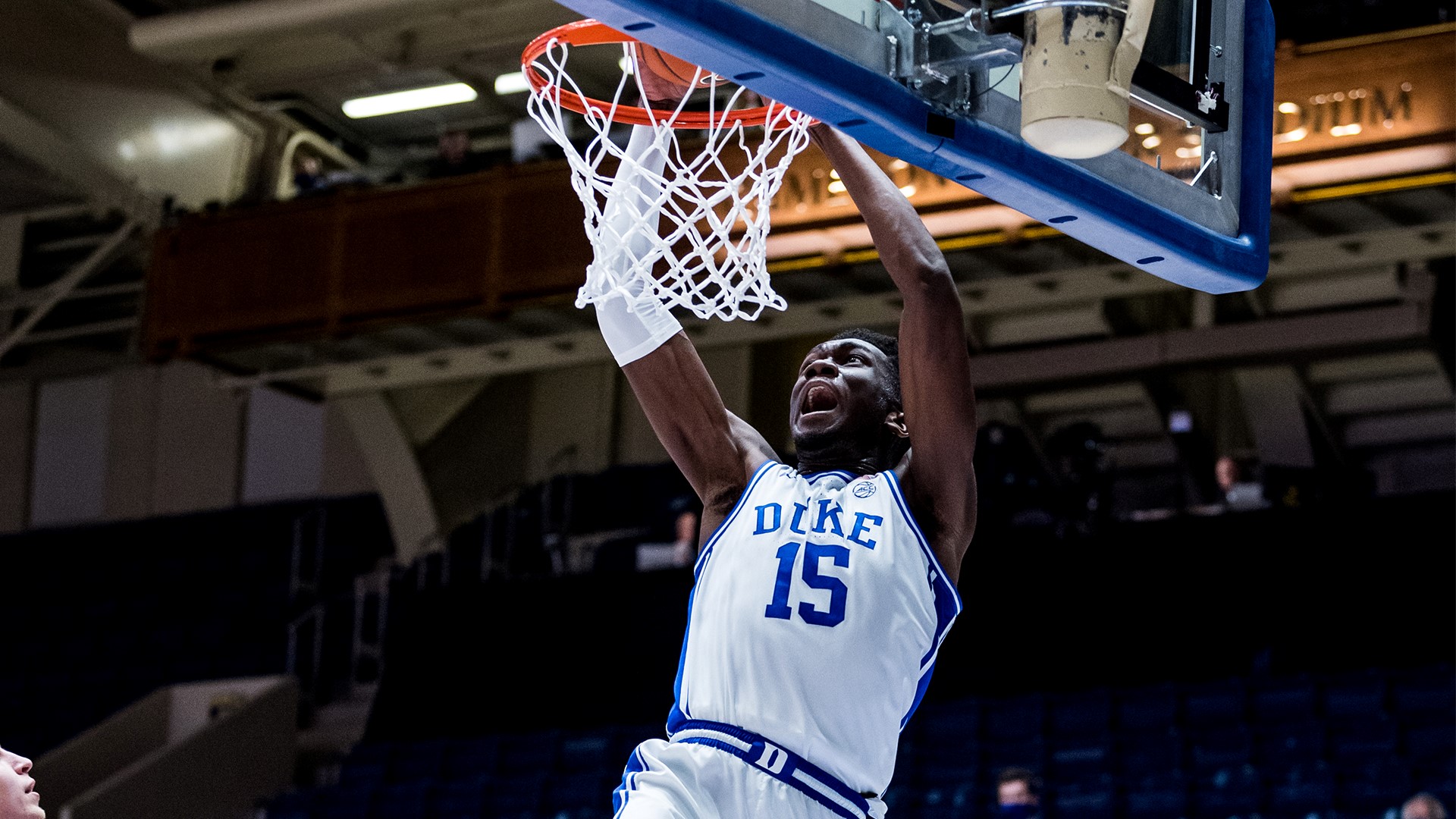 PHOTO: Duke’s Mark Williams was a force in the second half of last season.

DURHAM – We all remember how Duke center Mark Williams finished last season. The 7-footer spent the first half of his freshman season largely on the bench until gaining significant minutes in the second half.

Williams spent individual time working with former assistant coach Nate James, who is now the head coach at Austin Peay, but Williams said it wasn’t so much improving certain techniques or footwork as it was everything coming together.

“I think confidence was the biggest thing,” Williams said. “If I’m confident, the basketball will take care of itself.”

We get our first look at Williams as a sophomore when the Blue Devils play an exhibition game against Winston-Salem State, an HBCU, at 1:30 p.m. Saturday at Cameron Indoor Stadium.

Next, preseason-ranked No. 9 Duke opens the season against No. 10 Kentucky in the State Farm Champions Classic on Nov. 9 at Madison Square Garden in New York. The Blue Devils play the late game of the annual double-header tipping off at 9:30 p.m. following No. 3 Kansas and unranked Michigan State.

Duke has been picked as the preseason favorite to win the ACC and freshman Paolo Banchero (6-10, 250) the preseason Player of the Year. He’s a 5-star recruit ranked the No. 3 recruit overall by ESPN.

The attention may be on Banchero, but there are elevated expectations for Williams, too, based on the end of last season. He drew two votes for preseason Player of the Year and was named to the second team.

“It’s going to be different for him this year,” Carrawell said. “At end of year, nobody was game planning against him. It’s hard for a 7-footer to sneak up on people, but he was the fourth or fifth player down (on defensive game plans).

“Now, they’re going to more prepared for him. So, he has to bring that edge of intensity with him every day.”

But at the same time, Carrawell’s expectations include believing Williams can lead the nation in blocked shots.

“We want him to be if not the leading shot blocker in the country, one of,” Carrawell said. “He’ll be the great rim protector.”

“Anytime I’m in the post against him he’ll block my shot. I’ll put it up higher the next time, and I’m thinking, ‘There is no way he gets this one.’ But he gets it every time. It’s incredible how he does it and the ability he has.”

He also expects more from him offensively.

With our guards, Mark should be the best fly catchers in the country,” Carrawell said. “Throw up anything around the rim and 7-feet tall with that wingspan, he catches everything. When he gets in the post, he’s skilled. He’ll show he can step out and shoot the ball. He has range out to the 3-point line.”

Carrawell, of course, has the keen eye of a coach. It’s one thing for him to push the Blue Devils’ 7-foot, 242-pounder to build on his breakout games at the end of last season, but he’s not in the post with Williams in practice.

That has been the thankless job of Keenan Worthington, a 6-9, 224-pound junior. Well, maybe not so thankless. The former walk-on is now on scholarship despite having so many shots in practice rejected.

“Anytime I’m in the post against him he’ll block my shot,” Worthington said. “I’ll put it up higher the next time, and I’m thinking, ‘There is no way he gets this one.’ But he gets it every time. It’s incredible how he does it and the ability he has.”

Williams arrived at Duke a year ago as a 5-star recruit with Duke basketball bloodlines. He’s older sister Elizabeth was a played at Duke 2011-15, earning All-American honors in 2015, and has played professionally in the WNBA and overseas for eight seasons.

In the second half of the his freshman year, he began establishing his own Duke and national identity.

“He was able to step into that role because he was ready for it,” Worthington said. “It was because of everything he worked on and how much he pushed himself.”