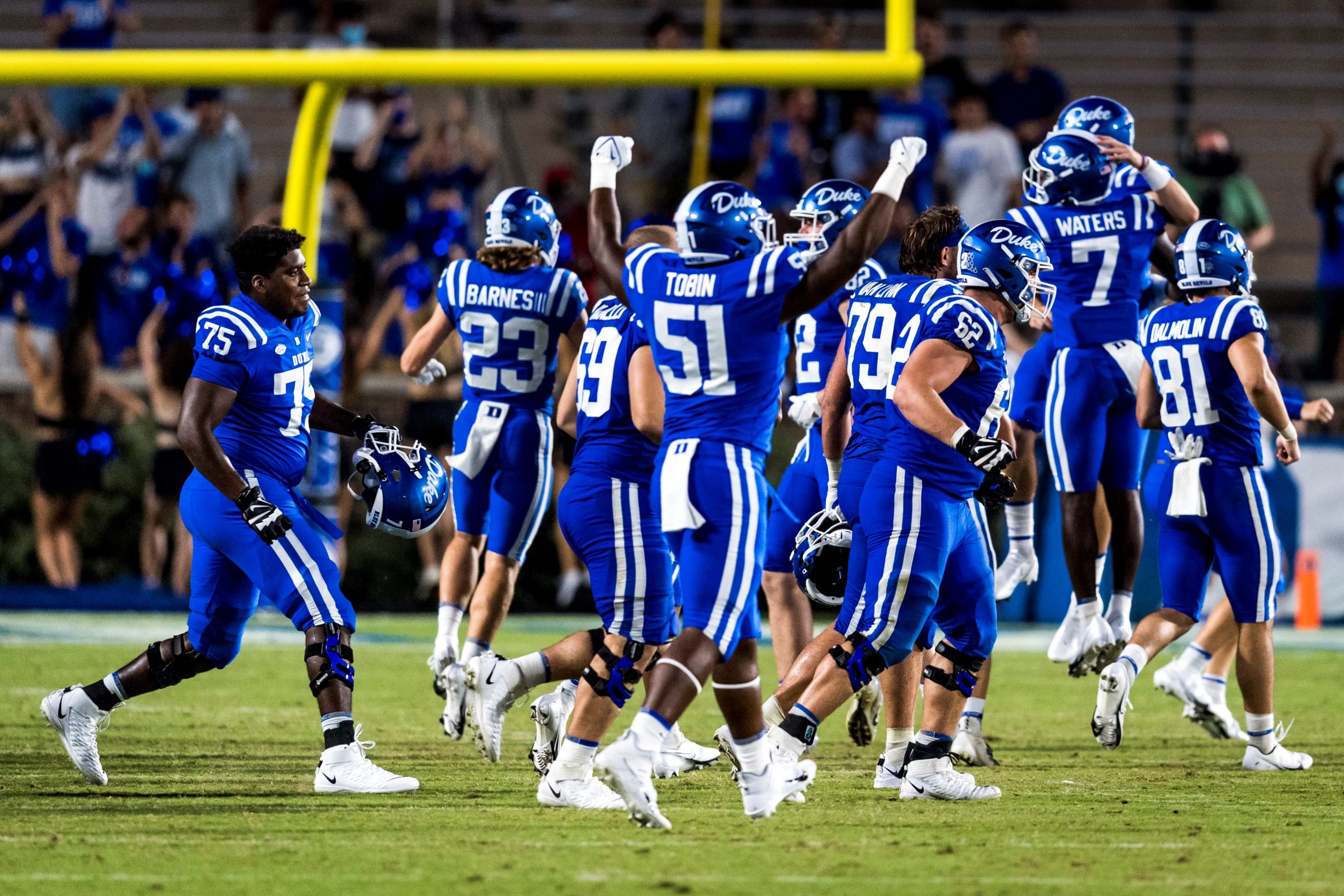 That has been considered the most convincing sign yet that Duke can end a two-year bowl drought after a dismal 2-9 season. Duke led 27-0 in the second quarter and eventually had to overcome Northwestern mounting a second-half comeback, but the Blue Devils made big plays down the stretch.

Duke quarterback Gunnar Holmberg completed a third-and-6 pass for a first down to Eli Pancol with 2:03 left in the game. Northwestern was out of timeouts and unable to stop the clock after the next three snaps.

“Eli caught my eye at last second,” Holmberg said. “I saw him coming across. He’s a basketball player at heart, and I knew he could jump high. Knowing your personnel goes a long way. I put it in a spot where I knew he could get it. The offensive line gave me time to scan the field. (Pancol) is a big-time playmaker making a big-time play.”

Duke coach David Cutcliffe has expressed optimism throughout the offseason, spring practice and training camp there is enough talent on the roster to return to the post-season despite last year’s record.

The offensive line has been steadily upgraded with more experience, he said.

The running back stable is talented.

The projected first-year starting quarterback has been developing to earn a place among the ACC’s talent list of QBs.

The defensive backs are deep.

The defensive line will be better than expected despite losses to the NFL and the transfer portal.

The team chemistry has remained strong.

More of those boxes were checked against Northwestern than through the first two games against Charlotte, a 31-28 loss, and North Carolina A&T, a 45-17 win.

Duke balanced its offense with senior running back Mataeo Durant carrying 22 times for 102 yards and one touchdown along with four catches for 41 yards and another TD.

Holmberg, a graduate student with junior eligibility, completed 31-off-44 passes for a career-high 314 with one touchdown. He threw his first interception on a pass he was hit as he released the ball.

Senior wide receiver Jake Bobo caught 11 passes for 109 yards with 70 yards after the catch. Bobo and the receiving corps also made catches in traffic to convert first downs.

“I would attribute that to our maturity as a team and as an offense,” Bobo said. “We have some older guys and young guys that have stepped up with big plays. On the sideline, it was just go out do what we need to do to win this game. We definitely weren’t as productive as we wanted to be in the second half. However, we were big when we needed to be. I a attribute that to Gunnar and his leadership and that front – those (offensive linemen) were workhouses up there.”

Redshirt sophomore defensive tackle DeWayne Carter forced a fumble when he caught up to quarterback Andrew Marty from behind with a tomahawk chop to force the fumble. Ben Frye was also pursuing and pounced on the loose ball. The defensive linemen weren’t making stops at Charlotte and in the first half of the A&T game, but they kept saying they’d improve with experience.

“I feel like the progress this week was about comfortability,” Carter said. “Everybody felt more comfortable in the game. Me personally, I feel comfortable about the scheme and how people are going to block me. It’s great to see our young guys coming along.

The decisive play that allowed the Blue Devils to go into victory formation was Holmberg connecting with Pancol under pressure That was another sign of Holmberg’s maturation.

Duke faced a third-and-six from its 29-yard line with 2:40 to play when Northwestern called a timeout. Duke ended up calling another timeout to discuss the crucial play call some more.

The play was designed for Bobo, but he was covered. Holmberg bought more time when he noticed the defensive end dropped off in coverage and he had a comfortable pocket on the left side to drift into. That gave him time to spot Pancol crossing right to left.

“After having a big lead our guys fought their way back,” Cutcliffe said. “There will be a lot of value watching the film seeing things we need to do better we’re going to see a lot of things we did well. A really good team victory and lot of energy in the locker room. We’re going to continue to build on that. We had a lot of people make critical plays on both sides of the ball and in the kicking game. Good punting and coverage played a role in this game.”

Coach K at ease coaching as recruiting rolls on without him