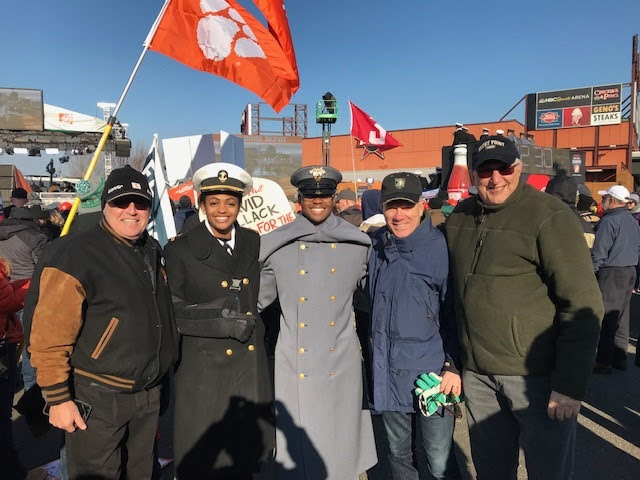 That’s what two of us told the other as three old friends from Big Rapids, Michigan, gathered from our places in the world for the 119th Army-Navy Game Saturday in Philadelphia. One flew in from Germany, one drove from our Michigan hometown and I flew from Raleigh, N.C.

For me, it was my fourth Army-Navy Game but first outside the press box and seated in the stands.

U.S. Army Col. (Ret.) Rick Steinke, a West Point graduate and my Little League baseball teammate, dates his Army-Navy Game experiences to his Cadet days when it was played at JFK Stadium – now a parking lot in the South Philadelphia Sports Complex that includes Lincoln Financial Field. This year, though, was his first since 1998. He traveled from Germany, where he is an Associate Dean at the George C. Marshall European Center for Security Studies.

Rex Schuberg was the one experiencing an Army-Navy Game baptism. Rex is the quasi-mayor of Big Rapids and anchor of a third-generation insurance business, the Schuberg Insurance Agency. We met at Riverview Elementary School in third grade when my family moved to Big Rapids, the college town for Ferris State University; my father was a professor.

We told Rex to forget the records. Sure enough, despite Army entering with a 9-2 record and Navy a 3-9 mark, the game was tense and hard-fought to the finish. Army survived a Navy rally to win 17-10.

But even on the occasion the game does turn out one-sided, there is so much else surrounding the experience. The entire day drips with inspiration and respect. The feelings are tapped from a deep well of 200 players representing West Point and Annapolis as well as their respective classmates in the stands numbering 8,000. They have committed to a volunteer military in uncertain times when we face a seemingly endless war on terrorism.

The players compete fiercely for 60 minutes, but ultimately they are on the same team. They stand together as each team sings its alma mater before its classmates. The goal is to sing second as the winners.

Our memorable day of experiences was bracketed by two pairs of siblings.

One sibling played for Army, two sat with the Cadets dressed in their dress grey with a long overcoat and one sat with the Midshipmen in her service dress blue coat.

Seth and Col. Steinke had so many West Point notes to compare I didn’t talk much with him, but Morgan told me she grew up wanting to attend one of the academies. Her choice was made for her; Navy recruited her as a lacrosse player out of Cathedral High in Indianapolis.

Rex, a track athlete at Ferris, wore a varsity styled jacket embroidered with “Ferris State Bulldogs” to represent our hometown college’s NCAA Division II football semifinal game. The Bulldogs played at Minnesota State in a game that kicked off at the same time.

Refreshingly, some fans in the crowd noted his jacket and mentioned the game. It’s good to know not all fans in college sports are limited to Alabama, Clemson, Notre Dame and Oklahoma in the College Football Playoff.

But we were kicking ourselves for not bringing a Ferris flag to be captured by the GameDay cameras.

Then we made our way to a tailgate with a retired general, Lt. Gen. Ken Hunzeker. Rick served under Hunzeker when Hunzeker was a Colonel and battalion commander. He told us Rick’s exceptional work and support helped him gain his promotion to general.

Rick’s rise up the Army officer ranks didn’t surprise us. Rex told a story about Rick as the quarterback at Big Rapids High. After a disappointing junior season, he gathered the returning players and told them “this isn’t happening again.”

“That was leadership Rick showed early on,” Rex said.

We also were treated to the Army bagpipe band marching by and later the Army cheerleaders. That was probably due to the general’s tailgate location.

Another retired general we met was Michael Linnington, currently CEO of the Wounded Warrior Project. Rick told him Rex had purchased a (pricey) ticket for a Wounded Warrior veteran to attend with us. Linnington gave Rex a heartfelt thank you.

WWP vet Kenneth Watkins, who was wounded in Iraq, grew up and still lives in Philadelphia. It was his first Army-Navy Game, but even though he turned out to be a Navy vet and had to sit with us in an Army section, it was a good day for all.

Once in the stadium, the pre-game events are poignant reminders of dedication. The pastor delivering the invocation said the Cadets and Midshipmen with us in the stadium are willing to die defending their country for everyone watching the game. He could have also mentioned all those — far too many Americans — oblivious to the grandest rivalry in college sports.

Then teams of Navy Leap Frogs and Army Golden Knights parachuted onto the field. I noted to Col. Steinke that one of the Navy guys stumbled to his knees on his landing, while the Army guys all hit their spots. They landed as softly as cats on their paws.

Next there were flyovers by jets and helicopters in separate but tight formations. The Apache gunships hovered slowly for a couple of passes above us.

Once the game began, the Black Knights scored on their first possession, but true to form the dogged Midshipmen kept playing hard. They consistently stopped Army’s inside running game the rest of the day. The difference was Army junior quarterback Kelvin Hopkins made enough plays throwing and running the ball. He scored two touchdowns on the ground and was the game’s MVP.

Hopkins’ 4-of-9 passing for 61 yards sounds modest, but on Army’s first possession Navy stopped the first two runs. Navy had won the coin toss and elected to kickoff off, hoping for momentum from a three-and-out.

But Hopkins completed a third-and-six pass to Glen Coates for 17 yards. One play later Kell Walker ran for 51 yards to the 10-yard line. Hopkins scored on the next snap.

That Hopkins and Coates are two kids from North Carolina high schools — Hopkins, Charlotte Independence; Coates, Davidson Day — was more than coincidence. Army and Navy both traditionally heavily recruit the Tar Heel state, which includes Fort Bragg in Fayetteville and Camp Lejeune in Jacksonville. To me, their third-down connection was one of two pivotal plays in the game.

The other was a fourth-quarter sack by Army senior linebacker Kenneth Brinson, one half of the other pair of bracketed siblings I had mentioned. His younger sister Kamryn competes on West Point’s track team.

Brinson’s late fourth-quarter sack to force a fumble that he recovered at the Navy 22-yard line set up what turned out to be Hopkins’ game-winning touchdown.

Later, I informed my friends Brinson had turned down Stanford to attend West Point. He has a 3.9 grade-point average in chemical engineering and was a finalist for the Campbell Trophy presented to the nation’s top student-athlete.

In a story on Brinson I wrote earlier in the year, I asked him about turning down Stanford among other Power 5 schools.

“I think there are some experiences learned that are unique to West Point,” he said.

Of his decisive play, I thought of a quote from Army junior linebacker Cole Christiansen in another one of my stories. He had commented that the linebackers played so well together because they trusted each other to be in the right spot. Christiansen, who along with senior James Nachtigal were all over the field against Navy, added, “Kenny is brilliant, so obviously you don’t have to worry he knows what to do.”

But despite Brinson having so much squared away in his young life, he credits his sister.

“She made her own choice, but I’m definitely glad she ended up here,” he said of West Point. “She’s a blessing for me. She keeps me straight if I’m messing up.”

I thought about how attending the 119th edition tied the season together with all the Army and Navy players I had interviewed.

Throughout the game we also followed Ferris State’s semifinal result on our smart phones. The Bulldogs won 42-25 to advance to the DII championship game. The Ferris victory elated Rex; he said he might drive from Philadelphia to McKinney, Tx., site of the title game against Valdosta State.

But that didn’t stop him from continuing to celebrate what was Army’s third straight victory over Navy as well as second consecutive Commander-in-Chief’s Trophy with a sweep of Air Force and Navy. He enthusiastically high-fived every Cadet we encountered on the way out of the stadium and walking toward our ride.

Maybe he was inspired by Army coach Jeff Monken.

During a lengthy fourth-quarter replay review, Monken finished instructing his players. I pointed him out to Rex as Monken ran from the middle of the sideline to the end where the Cadets were seated. Since the Cadets were already cheering and jumping up and down, it was more than Monken urging them on. He was joining in.

Such a bond based on pride and honor is what major college football traded for television money and rankings.

Alabama coach Nick Saban recently criticized his students for not showing up to games or leaving early. Clemson’s Dabo Swinney blasted his fans for not being satisfied by the margin of victories in a 12-0 season. Maybe Swinney, but I can’t see Saban, Ohio State’s Urban Meyer or Michigan’s Jim Harbaugh and others of their ilk letting go of their single-mindedness to enjoy the moment with their student fans.

As Rick and I had promised Rex to begin the day, the Army-Navy Game never disappoints.