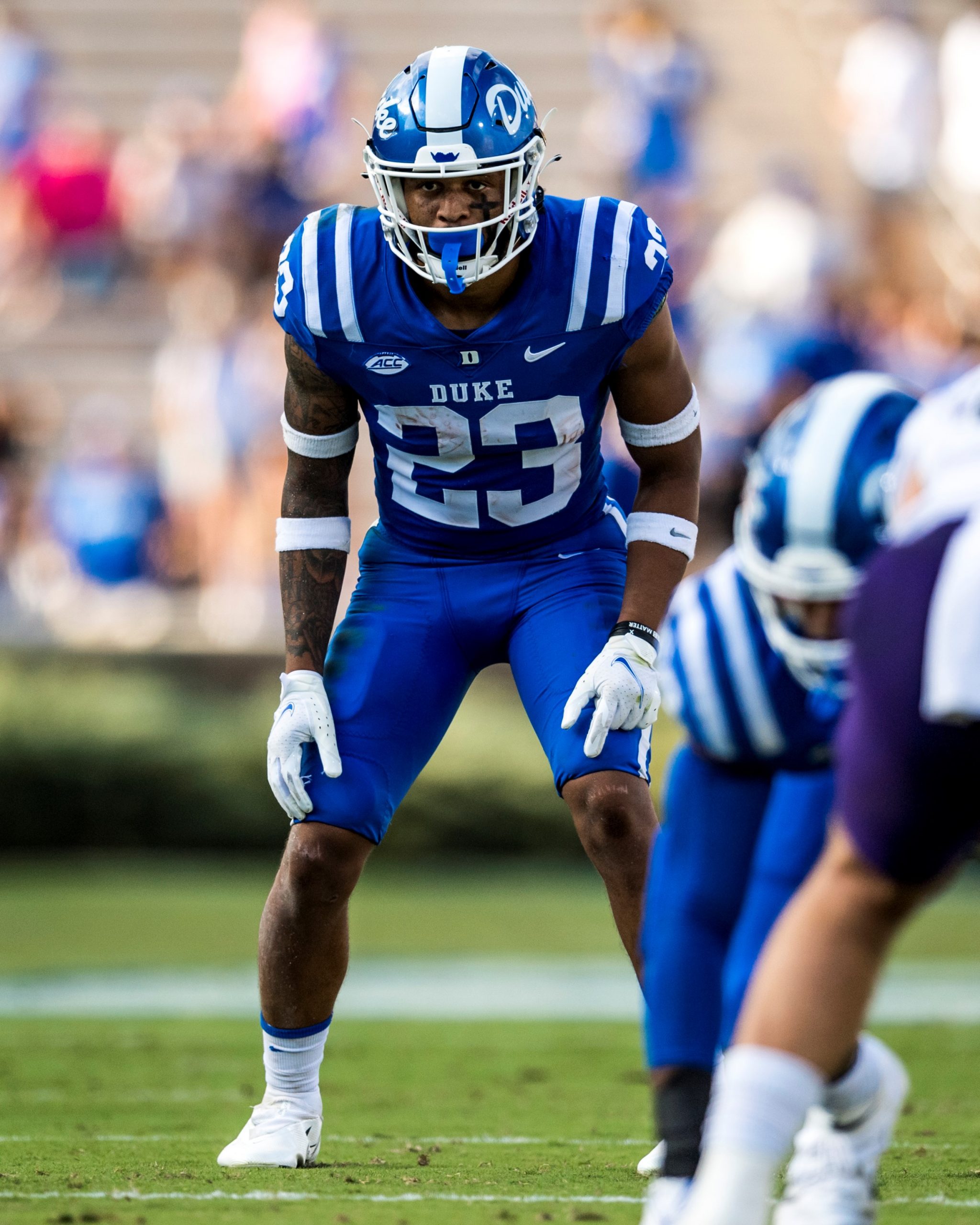 Young, Duke’s redshirt senior safety, blitzed and forced a fumble in the red zone to help the Blue Devils beat Northwestern last week, 30-23. Northwestern had driven to Duke’s 2-yard line when the Wildcats faced a third-and-goal. Young was zeroed in when the blitz call came in from the sideline.

“We had run it before, but it didn’t work out because of miscues on our end,” said Young after Duke’s Tuesday practice. “When the call came in, my eyes lit up. I knew I could get there. When the hole opened up, I just went.”

Young sacked quarterback Hunter Johnson for a 11-yard loss and defensive end Ben Frye pounced on the loose ball to preserve a 14-0 lead. The Blue Devils improved to 2-1 as they prepare for Kansas (1-2) at 4 p.m. Saturday at Wallace Wade Stadium.

Young wasn’t done impacting the outcome with one big play. The 6-foot-1, 205-pounder picked off an interception in the second quarter and finished the game with seven tackles. He was named the ACC Defensive Back of the Week.

“Lummie came with purpose,” Duke coach David Cutcliffe said. “Lummie, he sat out a week. I think he is really enjoying and embracing football and knowing that when it’s taken away from you and understanding it. I think he’s playing faster. He’s always been an extremely aware and savvy football player.”

Young’s awareness of Webster, a 1963 Westside grad when it was the Black school in Anderson during segregation, shouldn’t be taken for granted. Not all high school kids take the time to learn about their school’s past great athletes.

“I remember seeing his jersey and all his awards in the trophy case,” Young said. “I’ve always heard stories about what a great player he was.”

The school also formerly had a mural of Webster in the hallways, but time marches on. Michigan State retired his No. 90, with coach Duffy Daugherty declaring Webster the Greatest Spartan of the Them All. Notre Dame’s Jim Lynch, the 1966 Maxwell Award winner, said Webster should have won the 1966 Heisman Trophy, but it was a different time in America.

For Webster to escape segregation, Westside football Williams Roberts, who later served the school as a principal, was among the network of southern Black high school coaches steering their athletes to Michigan State aboard Daugherty’s Underground Railroad – a reverent nod to the bravery of Harriet Tubman.

The coaches across the South trusted Daugherty to treat their athletes fairly far from home based on both Michigan State’s history of integrated rosters and the clinics Daugherty put on in the South. The practice began when he spoke at an Atlanta clinic and he was upset to learn the Black high school coaches were denied entry.

Webster was as two-time All-American pick on the Spartans’ 1965 and 1966 national championship teams. Daugherty and defensive coordinator Hank Bullough played him in a what then an innovative hybrid role as a linebacker/safety. He was considered the unquestioned leader of the team and voted a team captain in 1966.

“He exemplifies what a student-athlete should be. He’s one of those guys who does everything right. He played three sports and made good grades. You won’t find anybody in Anderson that doesn’t love Lummie Young.”

Webster was the fifth pick of the 1967 NFL draft by the Houston Oilers and was considered on his way to the Pro Football Hall of Fame until knee injuries – he suffered his first one in high school – cost him a step.

But if Webster is too far in the past for most high school athletes to appreciate, Westside coach Scott Earley has Young to hold up for his current teams. Young’s list of scholarship offers stretched in the South to Georgia Tech and to Cal on the West Coast.

“He exemplifies what a student-athlete should be,” Earley said. “He’s one of those guys who does everything right. He played three sports and made good grades. You won’t find anybody in Anderson that doesn’t love Lummie Young.

“He chose to go Duke, and he had plenty of options. Anytime you leave a great university like Duke, whether you play on Sunday or not, you’ve got a great education. That was always important to him. He’ is one of those dudes you don’t come across a lot in this business.”

William Roberts probably said the same thing a half-century ago about his star.

My Black History Month guest spot on The Drive with Jack