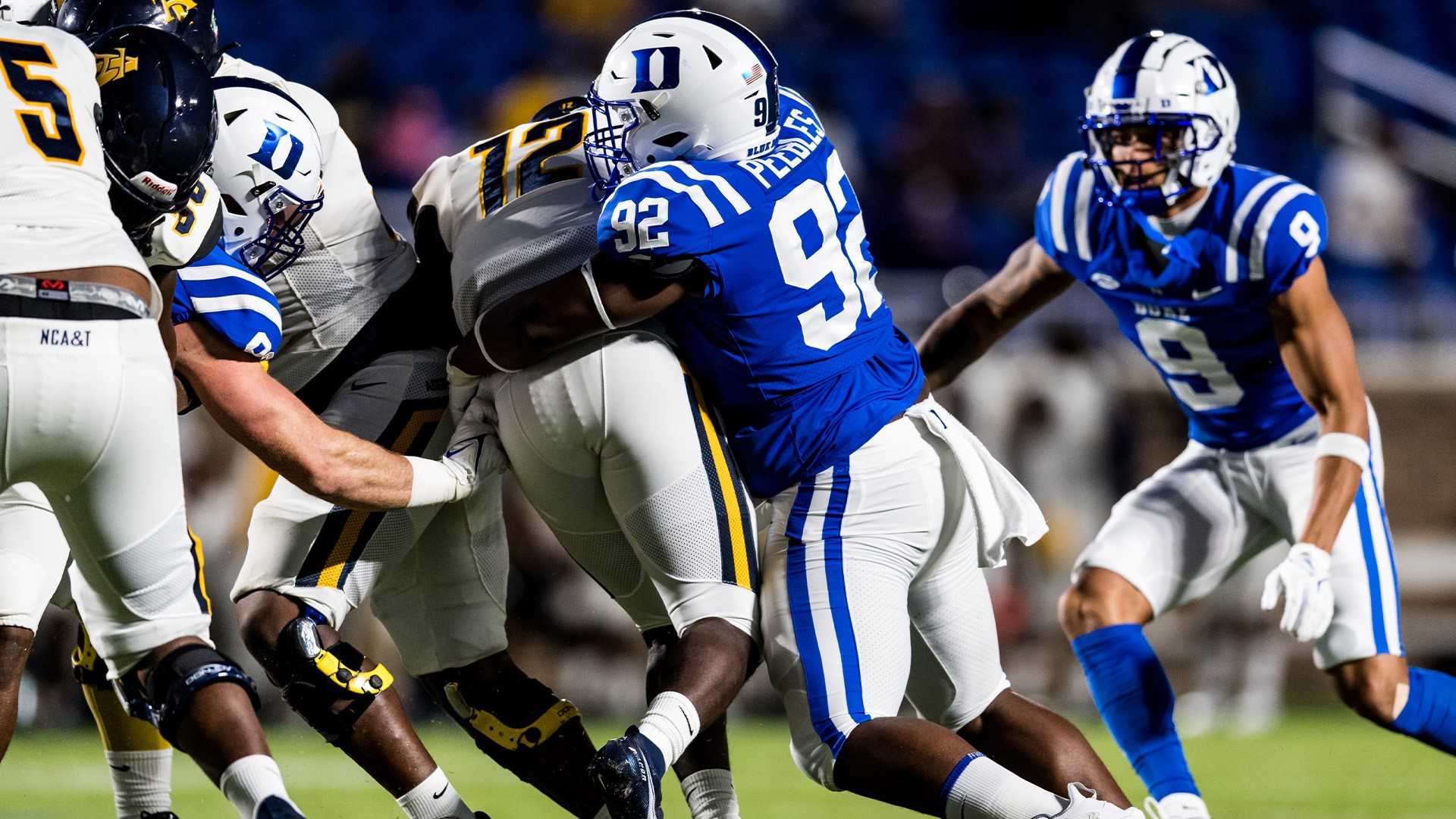 Two weeks in a row, Duke took the game-opening kickoff and soon punted. Then, the defense allowed its opponent to drive 80 or more yards for an early 7-0 lead.

In the 31-28 loss on Sept. 3 at Charlotte, the 49ers scored quickly, covering 80 yards on five plays in 2:38. Charlotte of the Sun Belt Conference converted the only time it was forced into a third-down play.

In last week’s 45-17 win at home over North Carolina A&T, the Blue Devils took the kickoff and were three and out. A&T was methodical, driving 86 yards in 20 plays, consuming 12:08 on the clock. The Aggies converted six third downs.

“That was one of things we’ve been harping on a lot this year – responding to adversity,” said Aeneas Peebles, a 6-foot-2, 280-pound sophomore defensive tackle. “Things might not always go your way, but you’ve always got put on more steam, never look back never bow your head.

“After that 20-play drive, we came together on the sidelines as a defense as a whole. We talked about our standard of our how we play. It was good how we came back. It was kind of wakeup call.”

Peebles is one of three new starters in the defensive line. He has been thrust into more playing time with the knee injury Gary Smith III (6-2, 320) suffered early in fall camp. The Blue Devils were hoping he’d be ready for the start the season, but he has yet to play. Peebles, ticketed as backup to starting defensive tackle DeWayne Carter, has started both games alongside Carter (6-3, 300).

“It has felt good increasing my playing time and making sure I’m in the game being active and playing fast,” Peebles said. “I pride my game on quickness and speed.”

Northwestern’s veteran coach, Pat Fitzgerald, and his staff have no doubt been game-planning to attack the young defensive line.

He ran for 87 yards on nine carries in the 38-21 loss to Michigan State and 22 carries for 126 yards in the 24-6 win over Football Championship Subdivision member Indiana State.

“Are there a lot of things that we have to continue to clean up and work hard at being better?” Cutcliffe asked rhetorically. “We were close in a lot of areas to some bigger plays and bigger opportunities in the kicking game and defensively. We got better as it went along. We tackled better, but we have to tackle better right out of the chute. So, a lot of positives that we learned from that game that we can build on.”