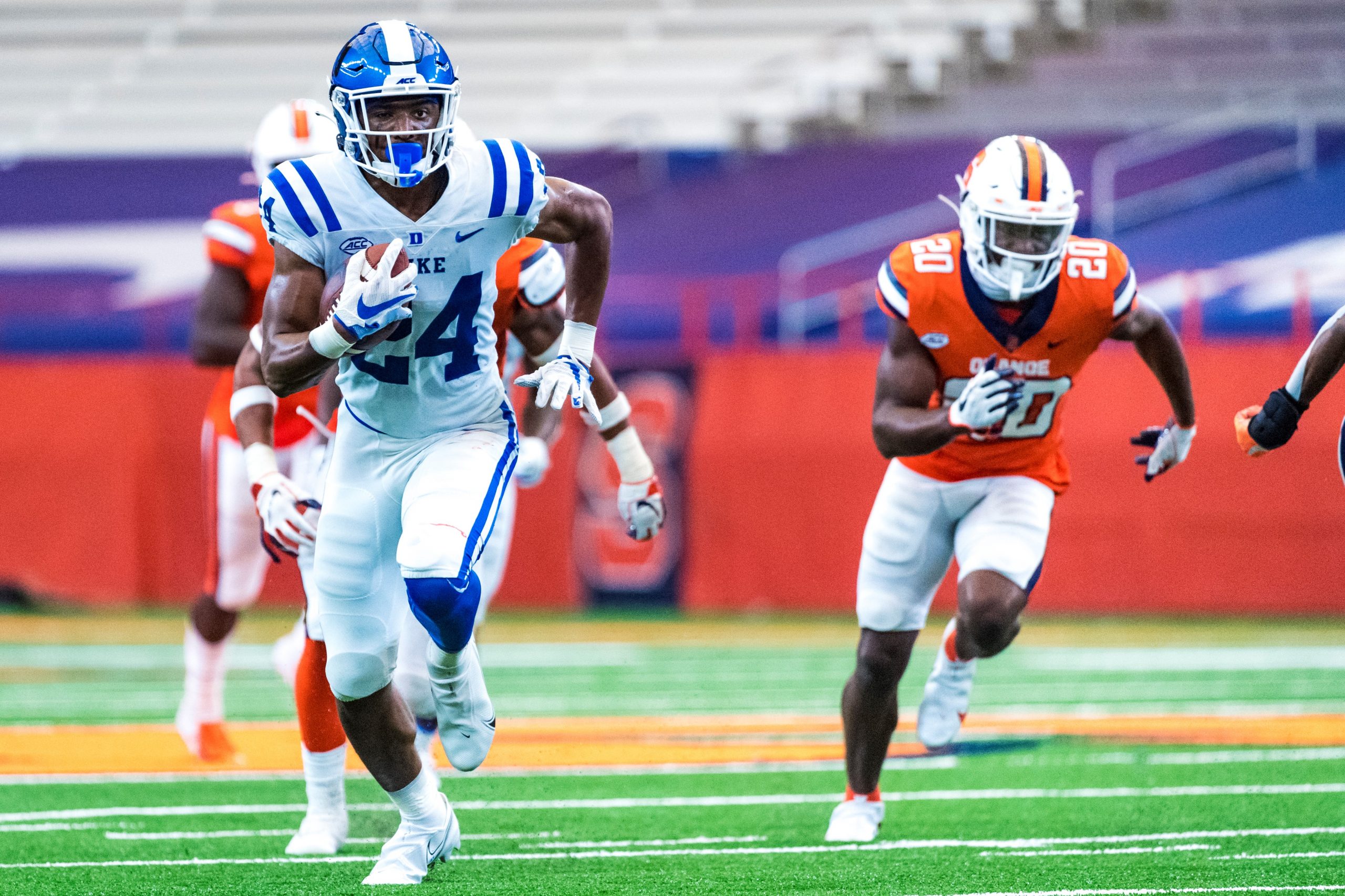 The Blue Devils’ inconsistent offense overcame four turnovers with 645 total yards, including 363 on the ground. Deon Jackson finished with 30 carries for 169 yards and Mateo Durant 23 for 163 and two touchdowns. Duke entered the contest averaging only 102.0 per game.

Quarterback Chase Brice completed 22-of-38 for 270 yards with two touchdowns but also one interception and one fumble.

Jarrett Garner caught three passes for 73 yards and a 52-yard TD and Jalon Calhoun three for 38 and a 26-yard scoring reception.

The Blue Devils improved to 1-4 and the Orange dropped to 1-3. Duke plays Saturday at N.C. State (3-1), which defeated Virginia 38-21 in Charlottesville.

There is more behind that coaching decision than meets the surface.

With 14:21 left in the first half and Duke clinging to a 10-7 lead, Brice was sacked and fumbled. Syracuse’s Geoff Cantin-Arku scooped up the loose ball and returned it 32 yards for a go-ahead touchdown, 14-10.

After the kickoff, Blue Devils coach David Cutcliffe replaced Brice with redshirt sophomore Gunnar Holmberg. He directed two first downs, including a third-and-3 pass for 12 yards to Jalon Calhoun, but then he turned the ball over on a fumbled handoff exchange.

“I felt like sometimes it helps the starter to see the game form the sideline,” Cutcliffe said. “I think it did calm him down. I told him it’s always the next play. If you start stressing, you start thinking you got to do things to win the game. The way a quarterback wins the game is to make all 10 other players right by doing your job. I think it helped him. I think from this point I just have to my job as well as everyone is doing theirs.”

The drip, drip, drop of turnovers and dumb penalties that cost Duke three straight losses to Boston College, Virginia and Virginia Tech was easy to project spilling over into another demoralizing defeat for the Blue Devils with their first-half mistakes at Syracuse.

But despite the mounting frustration that negated a promising performance in a season-opening loss at Notre Dame, Duke’s players insisted the team was not fraying at the seams.

They turned their words in to action as they overcame costly mistakes.

“The big word for us was finish,” said senior defensive end Drew Jordan. “That’s what the coaches were telling us to do. That’s what we were holding ourselves accountable as players. It was just going out there and fishing. That’s what we needed in past games and that what we did today.”

After Duke took a 7-0 lead, it took Syracuse only two plays to tie the game on a 70-yard touchdown pass from Tommy DeVito to Taj Harris.

Duke managed only 10 points despite four first-quarter trips inside Syracuse territory. The Blue Devils gave it back on at the Syracuse 32-yardline on a failed fourth-and-2. Running back Deon Jackson coughed up the ball at the Orange 36 one play after he broke off a 50-yard gain.

Television’s obligatory interviews with the head coach are usually prattle, but Cutcliffe didn’t mince words when Fox sideline reporter Abby Labar met him on the way to the locker room.

“I knew we had to run the football,” Cutcliffe said. “We have been close to being a good running team. We’ve done well. If we learn to take care of the dad gum football, we might be OK. I hate to be irritated with a 10-point lead, but I’m going to get their attention about taking care of the ball.”

CUTTING UP THE DANCE FLOOR

The win was obviously a big relief to a frustrated team. The Blue Devils enjoyed ther first joyful post-game locker room of the season.

“After the win we very excited,” Jordan said. “We know the type of talent we have here in this program. We were excited, having fund dancing around. It was fun to get this win.”

“Absolutely,” Cutcliffe said. “How would I not. They’ve all been waiting of the moment — as I have. We had a good time. It’s letting off a lot steam. That moment was such much fun. I can’t tell you the joy in my heart. People forget I’ve been in these guys homes. I know the parents, and I know the sacrifices the parents are making not getting to see their sons (due to thea pandemic). It’s time to dance. There was a lot of emotion in that locker room.”