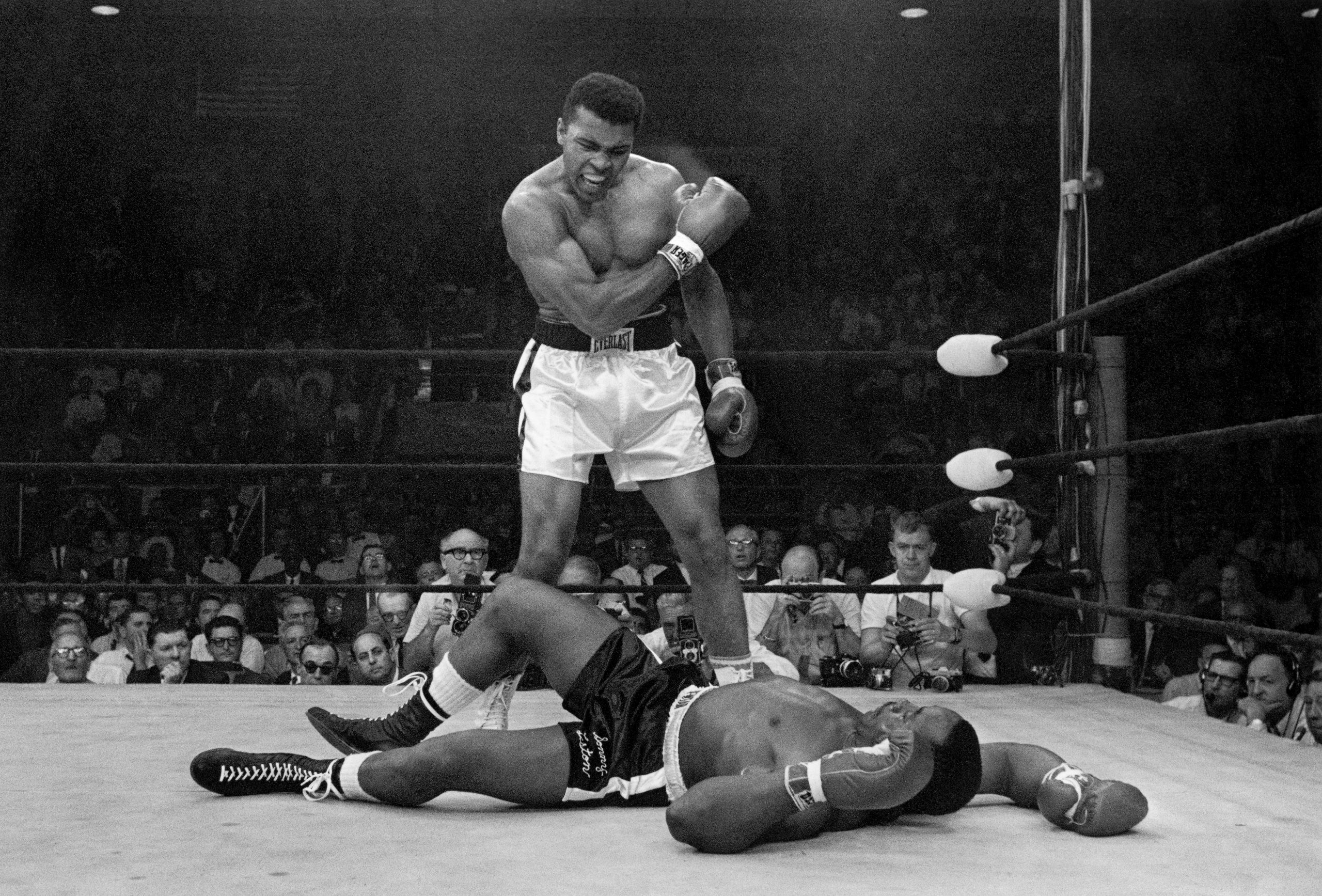 Photo courtesy of PBS: Muhammad Ali after his second win over Sonny Liston.

Plenty. That is, if Ken Burns is involved. He is, releasing his latest Public Broadcast System documentary in four two-hour parts, Sunday at 8 p.m. ET through Wednesday. Appropriately, it’s simply titled, “Muhammad Ali.”

We’ve already read multiple thick biographies, watched previous documentaries and movies on the big screen about the Greatest of All Time. Burns’ story-telling skill, though, is taking the time to provide a full story, balance, perspective and historical context. Burns co-directed the film with his daughter, Sarah Burns, and her husband, David McMahon. It took six-and-a-half years to distill it to its final cut.

“His life seems to have encompass all the issues of the second half the 20th century, all the intersections. Yet he’s also speaking to us in this moment now as we somehow planned this documentary to come out in the middle of Me Too and Black Lives Matter.

“It’s an epic hero’s journey,” Burns said. “He’s a mythic figure that provides us not lessons but opportunities to understand ourselves better. That’s what mythic creatures are about. Achilles had his great strengths, but he also has weaknesses, his heal and his hubris. We understand that and we wanted a complete picture.”

I was fortunate to watch previews of the film and participate on a Zoom call interview session with Burns through the National Sports Media Association. Set your recorder if you’re unable to be in front of TV Sunday night.

Burns, as is his trademark researching any of his epic films, leaves no stone unturned. Where does he find all these forgotten side stories? These forgotten people, photos and film clips to add to a familiar story? If it’s not new, it’s presented in a fresh way. But most of all he has the talent to keep an in-depth story moving along.

The script is deep but never lost in dull detail. And what remains current, such as Black Lives Matter, is brought out.

“His life seems to have encompass all the issues of the second half the 20th century, all the intersections,” Burns said. “Yet he’s also speaking to us in this moment now as we somehow planned this documentary to come out in the middle of Me Too and Black Lives Matter.”

By Black Lives Matter, Burns means the injustice of having his heavyweight title stripped for refusing induction into the Army during Vietnam. He fought the government at the risk of imprisonment until the U.S. Supreme Court ruled in his favor.

“He’s asked about the victory,” Burns said. “He says for the moment it’s OK. But for other people, it’s as if he’s anticipating Rodney King and George Floyd, for whom justice wasn’t served, and won’t ever be served.”

By Me Too, Burns means his “abhorrent treatment of women” when he was younger.

Burns also is critical Ali for his treatment of rivals, saying it’s “embarrassing to him and us to be using the language of Jim Crow America to belittle most of his rivals, particularly his greatest rival, Joe Frazier. There is a lot to unpack and to understand.”

That’s what Burns does that others skip over. There also is the need to explain how Ali died a Civil Rights advocate despite joining the Nation of Islam that preached separation for African-Americans and taught that the white man is the devil.

“Views of Muhammad Ali as he first refused induction are different,” Burns says, “from the one when he lights the torch at the (1996 Olympics) in Atlanta.”

Burns shows how Ali “grows out of his unattractive” periods.

Burns pulls this off – similar to working on his Vietnam documentary that took 10-and-a-half years to produce – with the time PBS grants him. He could make more money selling projects to premium networks, but they’d set deadlines. Burns prefers time for added research, even if the tradeoff is he has to raise some of the funding.

“It’s hard to distill his remarkable life into the 8 hours we did,” Burns said. “I’m talking to you from New Hampshire, where we make maple syrup. It takes 40 gallons of sap to make one gallon of maple syrup. That’s exactly what it is. We’ve spent years collecting literally hundreds and hundreds of hours to get the eight we are presenting on PBS.”

Burns says shorter stories with deadlines to meet result in too many superficial conclusions.

“There is a tsunami of information breaking over our heads all the time and it’s only getting worse,” he said. “We tend to resort to conventional and superficial understanding and tying up things up into nice bow. Nobody can be tied up in a nice bow. Certainly not Muhammad Ali.”

As someone who has researched since 2012 the integration of college football and Michigan State’s leading role with the first fully integrated rosters under coach Duffy Daugherty, I can see the difference in a Burns project and films on Bear Bryant mythology and the 1970 USC-Alabama game.

A convenient narrative has been regurgitated that praises Bryant as a benevolent segregationist and has aggrandized USC’s role. The false narrative relies on conjecture from Bryant apologists. The theme has been followed by books, newspapers and films such as HBO, Breaking the Huddle, 2008; Showtime, “Against the Tide, 2013; and ESPN, Integration, 2019; and ESPN’s E60, 2020.

There was NO overnight reaction to integrated USC defeating all-white Alabama in 1970. The myth didn’t spread until the 1990s, and it was based on a fictional locker room tale that USC linebacker John Papadakis wrote into a movie script. He portrayed Bryant parading USC fullback Sam Cunningham through his a locker room as an example of what a “football player looked like.”

That success of the tale is something taken from a Dustin Hoffman-like character in the movie “Wag the Dog.” The myth was propelled into college football lore at the expense of the true 1960s pioneers. The fiction of the night remains largely unknown to due to superficial films skipping facts in books and films.

The reality in 1970 was 90 percent of the major southern schools were integrated by the time USC arrived at Legion Field in Birmingham; that integrated SMU with Jerry LeVias scoring eight points won at Auburn 37-28 in 1968; that integrated Tennessee routed Alabama 41-14 at Legion Field in 1969; that Bryant had already recruited a Black player before USC arrived, Wilbur Jackson; that Alabama basketball coach C.M. Newton recruited a Black athlete a year ahead of Bryant.

When Cunningham admitted in 2003 the locker room scene never happened, he explained he got caught up in a story that turned out to be bigger than he imagined possible. In a Los Angeles Times obituary following his death on Sept. 7, 2021, a past quote in the article from Cunningham was used.

Reading it with the combined knowledge that Cunnningham denied the locker room seen happened, it sounds as if he began to grow annoyed he had been used as a pawn in the fictional tale to sell books and films.

“It’s already a historic story without adding any sauce to it, you know what I mean?” Cunningham says.

That’s not quite true since there was NO overnight reaction. It was another game on a path that head already been cleared by the true 1960s pioneers to make the 1970 USC-Alabama game possible. It was 20-plus years before the game was celebrated through the myth.

But that adds to suggestion Cunningham was miffed his role had been exploited and ultimately he was backed into a corner to admit the locker room scene was fiction.

It’s a corner that John Papadakis has escaped. In that same LA Times story, the paper adds to the superficial understanding of what happened that night. Papadakis was granted an escape route from the corner with a quote stating, “They (Alabama’s fans) told Bear Bryant, ‘We need some of those Sam Cunninghams on our team,’ I was there.”

No one has raised the question if Alabama’s fans, in addition to being portrayed as bigots, had never heard of three 1960s Black Heisman Trophy winners, Syracuse’s Ernie Davis, 1961; USC’s Mike Garrett, 1965; and USC’s O.J. Simpson, 1968. Or if USC’s fans understood Alabama’s high school football teams had been desegregated since 1968.

Papadakis used that same “I was there” defense when the locker room scene began to be exposed. He eventually backed off on the claim when he had no more cover from Cunningham. Using unidentified Alabama’s fans as cover has been safer.

That’s what makes any Ken Burns film special. There won’t be a “Wag the Dog” slant to “Muhammad Ali.”