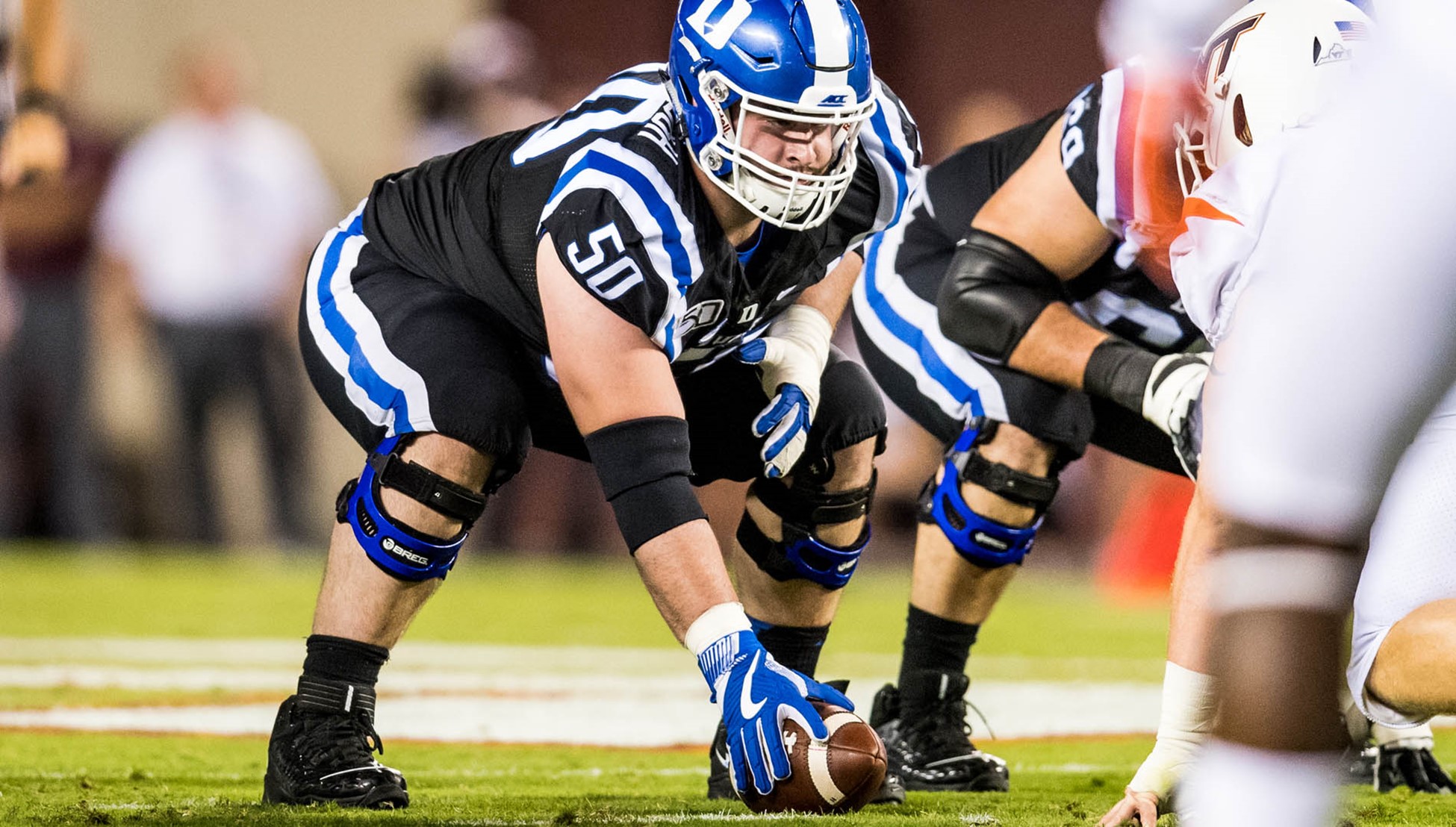 I invite you to visit my website homepage, TomShanahan.Report

DURHAM – These days Jack Wohlabaugh enjoys mundane pre-practice stretching periods. The Duke senior center also is excited performing other drills he has done enough times to do in his sleep now. No more taking things for granted.

Missing a full season with a preseason injury will spur that kind of awakening.

“I always got butterflies before practice or games, even before my injury,” Wohlabaugh said after a recent preseason practice. “Now, I got them even more. I’m really excited. The stuff that gets repetitive over time, I’ve been excited to do again. It’s definitely a newfound appreciation and a reminder of why you play. When you’re not playing, it really makes you miss it.”

Wohlabaugh was about to enter the 2020 season as a returning All-ACC honorable mention pick. He had started 18 of 22 career games since arriving as an Ohio State transfer in the 2018 season.

Then came the crushing setback and the long, winding road.

Wohlabaugh has been progressing toward the Blue Devils’ season opener on Friday, Sept. 3 against Charlotte at Jerry Richardson Stadium, a 15,314-seat facility on the Conference-USA member’s campus.

The 6-foot-4, 305-pounder’s return adds to the depth and strength the Blue Devils feel they have in the middle of their offensive line. Wohlabaugh has been pushed by redshirt freshman Addison Penn (6-3, 305) and the position is surrounded by experience.

The projected starting guards are junior Jacob Monk (6-3, 310) and redshirt junior Casey Holman (6-4, 290). Both were playing out of position in 2019 as starting tackles. Monk, who is from Clayton Corinth Holders, shifted from right tackle to right guard in 2020. Holman was the left tackle the past two seasons.

Duke offensive line coach Greg Frye has less experience to work among the offensive tackles, but for sophomore Graham Barton, a shift to left tackle returns him to his natural position. Barton was forced to start at center the final five games as a true freshman after the injury to Wohlabaguh was followed by a season-ending injury suffered by Will Taylor. The other tackle job may go to redshirt sophomore John Gellotte (6-7, 295). Fry is now in his second full season at Duke after he COVID-19 limited his acclimation to his new players a year ago.

“I think we have a physical offensive line, and I think we’re explosive,” Wohlabaugh said. “Coach Fry loves what were able to pick up, what he’s teaching — the scheme and the physicality he likes to play. It’s exciting to know if we do our assignments, there are guys in the backfield able to make the plays.”

Senior running back Mateo Durant is a preseason All-ACC pick after leading the Blue Devils in rushing a year ago with 817 yards, averaging 6.8 per carry, with eight touchdowns.

Duke’s seniors are reminding the players on a young roster that the Blue Devils’ 2018 bowl game was the program’s sixth in seven years.

“We’ve had a drop the past two years, but I think a lot of the guys are optimistic about going to a bowl game this year,” Wohlabaugh said. “The coaches have done a great job of showing us what happened and why we didn’t win enough to get to a bowl game. We have a distinct plan of A, B and C, and we can get there to be the team we want to be.”

Duke head coach David Cutcliffe, who gained his national reputation at Tennessee as the program’s offensive quarterback coaching quarterbacks such as Peyton Manning and Todd Helten, has been named to the Greater Knoxville Sports Hall of Fame.

Cutcliffe, the 2013 national Coach of the Year at Duke, has been named to two previous Halls of Fame, Alabama and Tennessee. He is from Alabama and got his coaching start at Banks High in Birmingham.