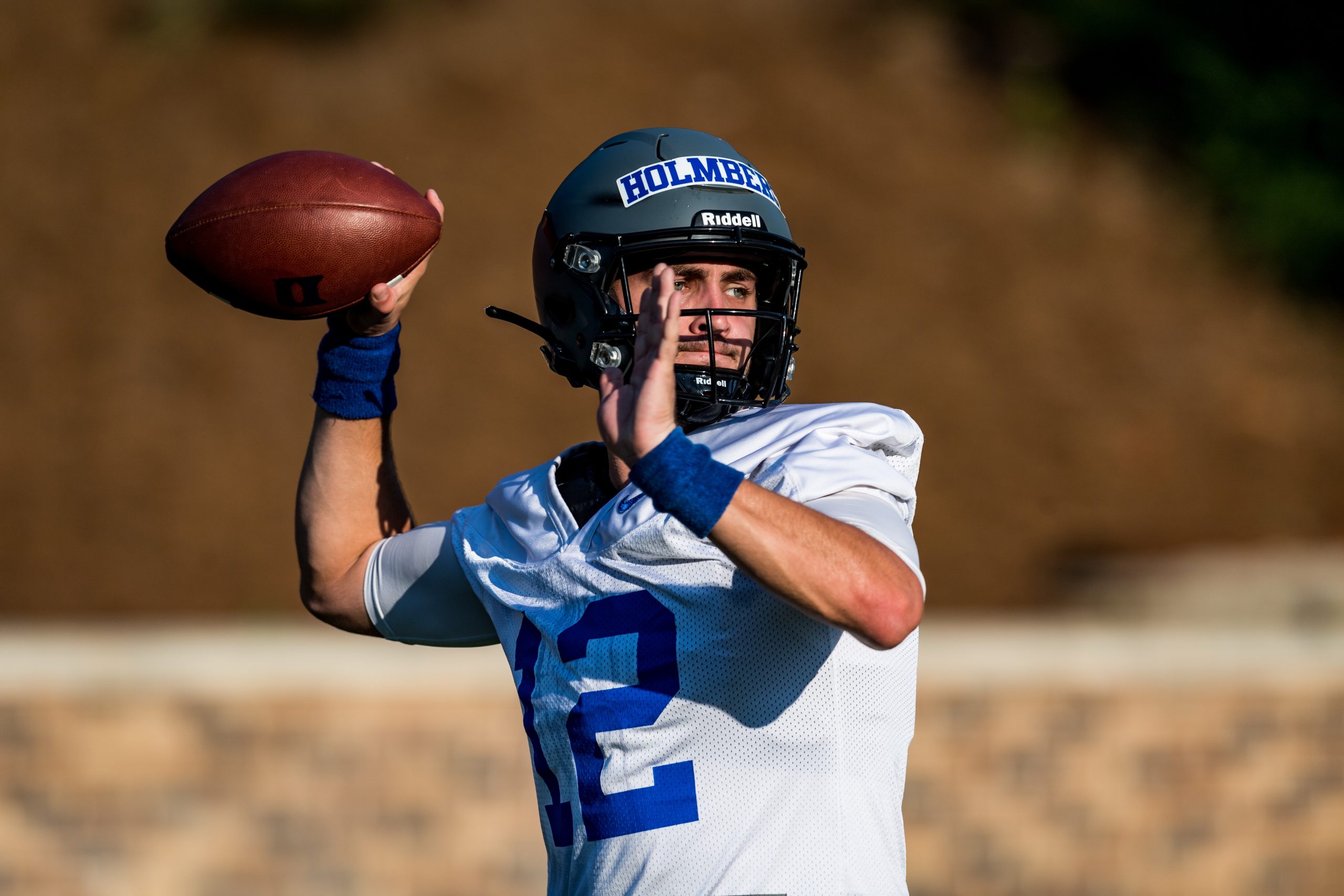 DURHAM – Any season opener is exciting, but 2021 seems brighter and refreshingly new.

Gone are the lock-down COVID-19 protocols and empty stadiums necessary to combat the pandemic that nearly canceled the entire season. Back is a sense of normalcy preparing for games – or at least as close to normal as possible with the recent uptick of COVID-19 infections — with fans in attendance.

Duke opens its season against Charlotte, a Conference-USA member, at 7 p.m. Friday at Jerry Richardson Stadium. The 15,314-seat facility is hosting a Power 5 opponent for the first time since it opened in 2013.

Blue Devils quarterback Gunnar Holmberg and cornerback Josh Blackwell added another bonus by simply reuniting in the locker room’s team bonding, family environment. A year ago, Duke split split its roster randomly for social distancing reasons. Half the team was in the main Wallace Wade Stadium locker room. The other half was in the Brooks Practice Facility utilized by the visiting teams on game day.

“To actually all be in the same locker room again helps the cohesion and camaraderie,” Blackwell said. “That’s important. It builds cohesion to have guys together, laughing and stuff.”

Football, the most complicated team sport with 22 moving parts, requires balancing talent and teamwork on both the field and locker room. A team can win on talent alone, but to win big requires a tight locker room. Holmberg and Blackwell added it was tough for the returning players to get to know the younger members and transfers.

Turnovers were Duke’s primary downfall in a 2-9 season, but the lost camaraderie didn’t exist to help dig out of holes.

“Last year, sometimes you were on practice field and you felt the guy out there was on another team,” Holmberg said. “Lunches and dinners were grab and go and we were in separate locker rooms. They didn’t want us to hang out with guys outside of football unless we had a mask on and then only two or three people per room.

“So, being in the same locker room again and being able to hang out with guys outside of football is nice. Of course, we’re still having to be smart (with protocols)”

That explained why Blackwell and Holmberg spoke with to media wearing masks after practice to comply with Duke’s indoor COVID-19 restrictions.

Duke returned 12 starters, six on offense and six on defense, but the experience and depth level are bolstered by 78 returning lettermen. The Blue Devils are counting on that bonus to overcome preseason predictions of last place in the seven-team Coastal Division.

Holmberg takes over under center making his first career start, but this is his fourth year on campus with junior-year eligibility. His leadership is not an unknown quantity among teammates. The 6-foot-3, 205-pounder from nearby Wake Forest High was voted a team captain along with fourth-year senior receiver Jake Bobo and third-year sophomore defensive tackle DeWayne Carter.

The Holmberg family members traveling from Pennsylvania and Minnesota to attend Holmberg’s starting debut include his uncle Rob Holmberg. Rob has filled as the sports father figure role following the death 12 years ago of Gunnar’s father, Sean, from brain cancer.

Rob played linebacker at Penn State and in the NFL, but he was a high school quarterback.

“He texts me a good amount,” Gunnar said. “He texted before scrimmage, he texted me before camp started. He talked about, ‘You don’t have to be Superman. You’re one of 11 guys on offense and 22 on the field. Just do your job. Be prepared, we all know you can do it.’ He reiterated it’s the game of football you grew up loving to play, and it’s just another level.”

Part III: College football integration lore, in the form of traffic, was steered down a fairytale exit