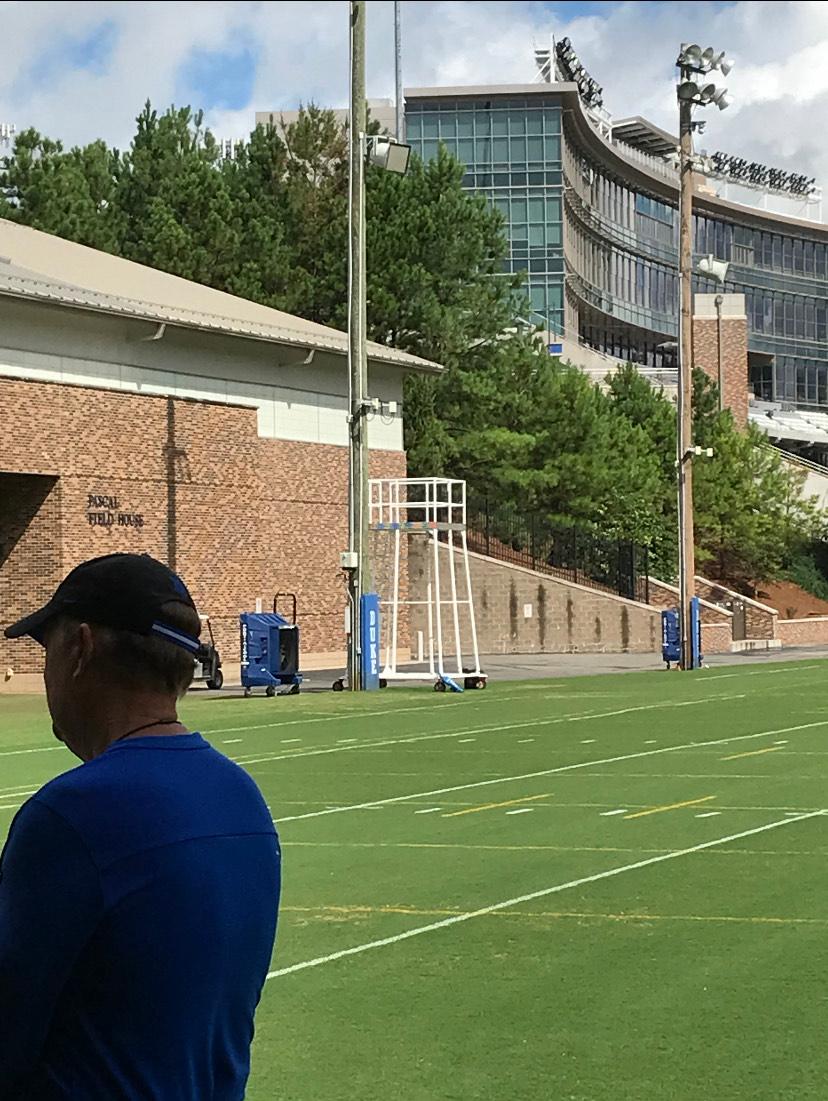 DURHAM – Duke coach David Cutcliffe reached back to his Alabama roots in the off season, purchasing a mobile tower for the practice field. He decided to “Bear” down his day-to-day practice role from a year ago.

He’s gone from micro-managing the offense, calling plays as the offensive coordinator, to climbing a modern-style Bear Bryant tower. The legendary Bryant, of course, patented coaching from a tower over his Alabama practice field while winning six national titles.

Bryant’s structure was off to the side of the practice field, but Cutcliffe’s tower is a light-weight 10-footer on wheels that resembles a lifeguard tower. He likes to position it in the middle of the field so he can see the offense on one side and defense on the other. He shouts instructions through an megaphone, but he can wheel the tower to a new position if necessary.

“I wish it was motorized,” Cutcliffe said after Wednesday’s practice as the Blue Devils prepare for their season opener, Sept. 3 at Charlotte. “I’d be revving it up.”

The players can tell you one position is enough. Cutcliffe admitted he’s pointed out enough praise along with corrections that one day the battery on his megaphone went dead.

At Alabama, the players feared Bryant descending his tower during practice. Was he coming for me? If he was, they trembled over both his wrath and having tobacco from Bryant’s unfiltered cigarettes spewed on to them.

With Cutcliffe on a motorized tower, there would be no suspense. They’d know he was coming for them, but at least he doesn’t smoke.

“I call it my nest,” Cutcliffe said. “What I was doing before, I was away from the team. If I go up to see – I really believe as a football coach you’ve got to be able to see everything — I can see everybody’s fundamental drills. It goes back to the habits.”

The tower view also places Cutcliffe’ a view on both sides of the ball. No defensive players taking a breather if they see Cutcliffe on the turf with the offensive unit.

“It’s allowed me to be interactive with the players,” he said. “I also correct things that have happened. One of the things you don’t want to do is practice a mistake. When you see something that’s a mistake, you hopefully get it stopped on the field.”

Cutcliffe was not only raised in Alabama, he attended the University of Alabama in the mid-1970s and was a student assistant with the football program under Bryant. Duke’s 14th-year head coach launched his career in 1976 at Banks High in Birmingham before joining Tennessee’ staff, in 1982.

“I used to wonder why coach Bryant went in the tower so much,” Cutcliffe said. “I was able to ask him when I got a little older. I’ve had conversations with (Washington) coach (Don) James and (Florida State) coach (Bobby) Bowden about tower coaching. They’re two guys that have sadly passed away. I think (the tower) can be effective.”

One area Duke needs to see an immediate improvement is turnovers. The Blue Devils were a minus-16 in a 2-9 season last fall. They lost 26 fumbles to 20 recovered, threw 19 interceptions to nine picked off.

Ball security needed to be an emphasis this year, and Cutcliffe’s overall role instead of serving as offensive coordinator. He has more time to emphasis habits with the player or through the position coach with other things he spots on practice film.

“I’m seeing better habits,” he said. “I’m not naïve. You do something in practice and then all of the sudden it seems like you get in a game and they’ve forgotten everything you taught them. Well, then you haven’t taught them. You told them.

“There is a difference in teach and tell. You all remember that when you were in school? You had some teachers that teach you and some that just tell you. The ones that tell you’re grades often aren’t as good as the ones that teach you. I didn’t grade very well the last couple of years. I was a teller, not a teacher.”