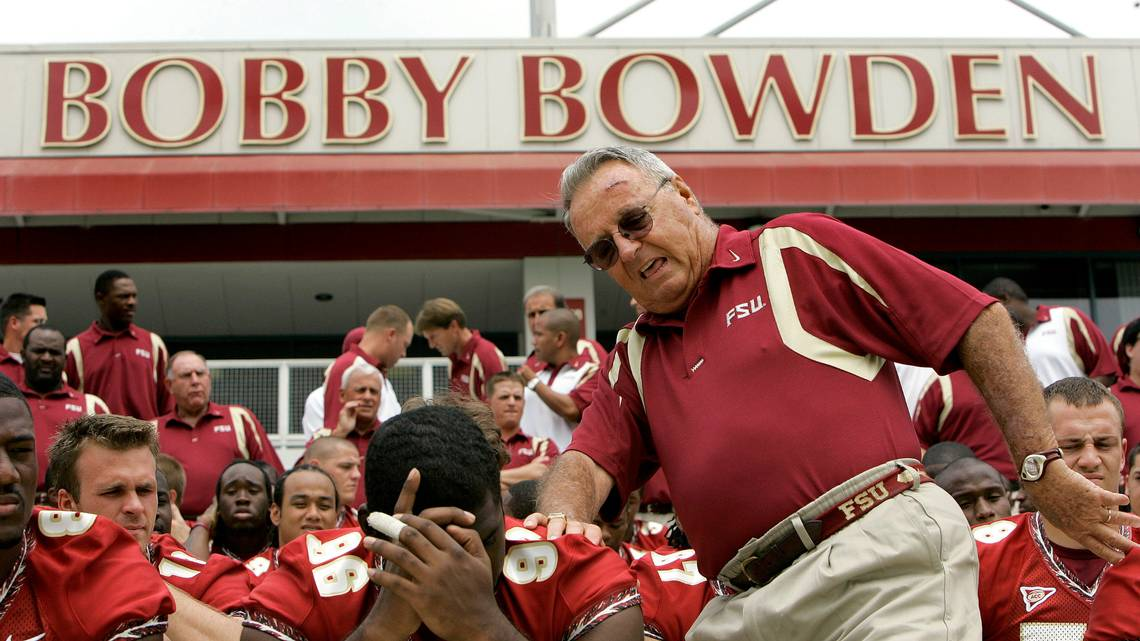 The news that College Football Hall of Famer Bobby Bowden died on Sunday at age 91 reminded me of my 2010 interview with him. We discussed how he copied q San Diego State tradition on what became a landmark night for Florida State’s national identity despite suffering a loss at San Diego State.

Bobby Bowden vividly recalls Nov. 19, 1977 when his 13th-ranked Florida State team played at San Diego State. Bowden returned home with more than a 41-16 spanking that lives on as a legendary night in SDSU lore.

He told Florida State’s promotions department about the Aztecs’ pre-game show featuring an Aztec warrior thrusting a flaming spear into the turf to the delight of 50,543 fans.

The next year Florida State created a pregame tradition with Chief Osceola, a Seminole Indian, riding Renegade, an an appaloosa horse, and planting a spear in the turf to the roaring approval of Doak Campbell Stadium’s fans.

“We got that idea from San Diego State,” Bowden told me in a 2010 interivew. “I remember we came out of our dressing room and saw (the Aztec Warrior mascot) in a sarong with a flaming spear. It was very inspirational.”

“My wife (Ann) was with us on the trip, and we decided we needed to do something like that. That’s where we got the idea to get the crowd riled up. Oh, gosh, that’s one of the best pre-games in college football.”

In the days before cable TV kept fans at home with games around the clock, San Diego State filled its stadium for Saturday night shows under Don Coryell (1961-72) and Claude Gilbert (1973-80). All the games in the East, South and Midwest were over. San Diego State fans ventured out to watch a passing game ahead of its time.

“We were having a heck of a year, but they wore us out,” Bowden recalled. “They beat the heck out of us and looked as good as anybody. When we got home, I wrote their coach a note and congratulated him on a such a great job.

“I also remember they had a loud crowd that night. They had a big Samoan (representing the Aztec Warrior mascot) with a flaming spear on the field. He would go up in the stands to get the fans riled up.”

Florida State not only rebounded from the loss, they kept winning until Bowden built the program into a perennial national title contender. The Seminoles won national titles in 1993 and 1993. Bowden produced two Heisman Trophy winners, Charlie Ward (1993) and Chris Weinke (2000).

Guess which school is better known for a flaming spear pre-game entrance?

Bowden was in only his second season at the time as he turned an obscure program. Gilbert, Don Coryell’s hand-picked successor, was unceremoniously fired three years later, and the Aztecs drifted between mediocrity, embarrassment and obscurity under six subsequent coaches.

Such success at SDSU, in Bowden’s opinion, was long overdue.

When Bowden asked what happened to Gilbert, I explained to him that he was transitioning SDSU’s program from a junior college-based roster under Coryell from 1961-72 to recruiting high school players as the Aztecs prepared to join Western Athletic Conference (basically today’s Mountain West membership) in 1978.

“When a guy like Coryell comes around, he spoils people,” Bowden summarized.

Bowden, in retirement, wrote a book, “Called To Coach.” He’s also one of five coaches in a motivational DVD series — “Get Coached.” The DVD was released Tuesday and includes Mike Ditka, Mike Singletary, Sean Payton and Rex Ryan.

He also had a Discover Card commercial as he sits aboard his boat and says in frustration “Dadgummit!” to “Peggy” on the phone.

Bowden added he wished Coryell, who passed away at age 85 in July, 2010, had been around to see the Aztecs’ newfound success under Hoke. Coryell and Bowden are both members of the College Football Hall of Fame, but he sides with Aztecs and Chargers fans that believe Coryell belongs in the Pro Football Hall of Fame as well.

“I think he’s deserving of anything he can get,” Bowden said. “I think in the history of American football, he should be in the Pro Football Hall of Fame because of what he did with the passing game.”

Statement from ACC Commissioner Jim Phillips on the Passing of Bobby Bowden:

“Our hearts are heavy as we mourn the passing of Bobby Bowden. The ACC, Florida State and the entire college athletics family have lost a true giant. Coach Bowden was one of the most successful, humble and endearing individuals who was also one of the most decorated college football coaches in history. Throughout my several interactions with Coach Bowden, it was clear that he was warm, friendly, caring and always made people smile. It was no secret that Coach Bowden genuinely loved his players, the Florida State community and college football. On behalf of the entire ACC family, our thoughts and prayers are with his wife Ann and the Bowden family.

Brice likes what he sees up front for first start