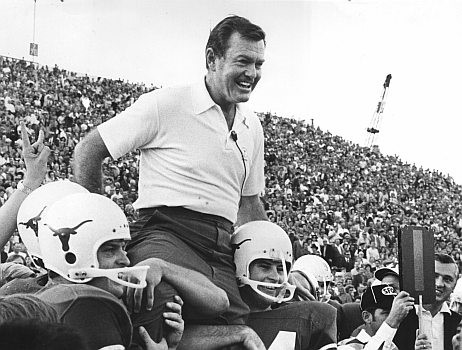 PHOTO: College Football Hall of Fame coach Darrell Royal turned to Willie Ray Smith Sr. when he realized it was time to integrate his football program.

Willie Ray Smith, an uncommon coach with a common surname, toiled at three underfunded black high schools during segregation as a second-class citizen. His Texas stature, though, grew with the times. He’s a Prairie View Interscholastic League Hall of Famer that compiled 235 career wins and two black state titles in 33 years.

Yes, Royal and Smith started from opposite ends, but life is a continuum. Eventually they shared a moral intersection.

By the early 1970s Royal admitted to Smith he had been wrong not to recruit black athletes earlier.Texas royalty sought Smith’s uncommon advice on how to mend fences with black high school coaches, particularly those in the talent-rich Golden Triangle (Port Arthur-Beaumont-Houston). That included Smith at his Beaumont school, Charleton-Pollard High.

“He could very easily have adopted the attitude of, ‘Yeah, well, now you need me. I’ve been trying to do this for a long time — to heck with you.’ ” Royal revealed years later in a video tribute to Smith. “But that wasn’t his attitude at all. I sought his council, and he gave it freely. He told me where the mistakes had been made and what I needed to do to get things right.”

The video serves as an annual evocation when shown at a banquet for the Willie Ray Smith Offensive and Defensive Players of the Year. Last month’s event was the 28th annual that the Beaumont Founders Lions Club sponsors. The area’s high school players covet these honors as the “Heisman Trophy of Southeast Texas.”

Both men are long gone, Smith having died at age 81 in 1992 and Royal at 88 in 2012. But Smith’s role as Royal’s Thurgood Marshall remains a story of reconciliation for the betterment of all.

Royal’s problem with black high school coaches began when he was said to have stated Texas can win championships without black athletes. Although the 1969 Longhorns substantiated that claim as the last all-white national champions, Royal had seen the future by then.

His first black football recruit, Julius Whittaker of San Antonio, played on the Texas freshman team in 1969 (NCAA rules prohibited freshmen eligibility until 1972). Whittaker was the first Texas black football letterman (1970-72), but aside from Whittaker, Royal’s initial efforts at rapprochement had been coolly met.

That’s when he turned to Smith.

The uncommon man not holding a grudge was no surprise to Garland Boyette, a nine-year NFL veteran that played for Smith at Wallace High, a Golden Triangle school in Orange.

“He was into helping kids,” said Boyette, now 81. “Most of the kids he coached were poor. He wanted to help them get to college.”

In the pre-Internet age, high school coaches carried the most influence with a recruit. Smith sent dozens to college, primarily to Historically Black Colleges and Universities; 20 made it to pro football.

But later in Smith’s career he met Michigan State’s colorblind coach, Duffy Daugherty. When the College Football Hall of Famer spoke at an Atlanta clinic and learned black high school coaches were denied entrance, he put on a free clinic for them — a practice he continued over the years.

With the trust Daugherty garnered, Smith and other southern black coaches began to lay the tracks to Michigan State’s Underground Railroad. In all, Smith steered nine players from Charlton-Pollard and the Houston area to Daugherty.

They included two of his sons, Bubba and Tody (His oldest son Willie Ray Jr. played at Iowa before a knee injury cut short his career). Bubba was a College Football Hall of Famer, the first pick of the 1967 NFL draft and a Super Bowl V champion. Tody, who transferred to USC, also played in the NFL.

Royal’s teams continued to win six straight SWC titles from 1968 to 1973, but the Longhorns falling down the Top 25 ladder with three to four games a season. At the same time some players found an escape from Texas segregation, other state colleges began to recruit black players.

In 1964, the University of Houston, whose head coach was former Daugherty assistant Bill Yeoman, signed Warren McVea as the first black football player at an all-white Texas school. McVea played on the varsity from 1965-67 and six NFL seasons.

In 1965, SMU coach Hayden Fry signed Jerry LeVias as the SWC’s first black scholarship football recruit. LeVias starred on the Mustangs’ varsity from 1966-68 and played six years in the NFL.

That same 1966 college season, John Westbrook was the first black player at Baylor, another SWC school, as a sophomore walk-on.

Royal, with an open mind, could have been ahead of the curve with the 1963 recruiting class – not to mention sooner – when one of college football’s all-time great defensive players told him it was his dream to play for the Longhorns. Bubba Smith related the story in a 2008 HBO documentary on the desegregation in college football, “Breaking the Huddle.” Bubba said Royal told him he could give him a scholarship, but the alumni and fan base wouldn’t allow him to play.

That was evidence of Royal dragging his feet, especially with hindsight, for several reasons:

1) In 1956, the Texas student body was integrated; 2) In 1961, the Texas Student Senate voted 22-2 that the school should accept black athletes; 3) In 1963, the UT Board of Regents voted to allow black athletes to compete in all sports; 4) Texas had black athletes on its track team as early as 1964; 5) Royal, in addition to serving as athletic director, had used his leverage to gain a hefty contract that included tenure for remaining at Texas after Oklahoma, his alma mater, had tried to lure him away; and 6) Imagine Bubba dominating practice all week but not playing on Saturday.

Alabama coach Bear Bryant, another coach with leverage among his bosses and fan base, had made similar excuses for dragging his feet, even though his campus had been desegregated since 1963.

Royal didn’t help his early attempts at inroads when he was quoted in a 1970 Harper’s magazine story that hiring a black coach wasn’t important to him.

“A bunch of Negro boys came to me a while ago and said I could solve all possible difficulties by hiring a black coach. Now that would be fine for them, but I’ve got to look at the other side. I’d have a lot of white boys on the team coming to me saying they couldn’t play for a black coach. The family atmosphere of the team would be destroyed. Once the club harmony and spirit begin to deteriorate, I don’t care what kind of talent you have, you won’t win.”

Other Southwest coaches had used the same misguided logic to resist integration. In 1965, Texas A&M coach Gene Stallings, a Bear Bryant protégé, said black and white players couldn’t get along in a locker room.

Of course, Daugherty’s teams smashed those barriers at the same time Royal, Bryant and other coaches in the South resisted the march of time.

When the Spartans played Notre Dame in the 1966 Game of the Century, a quasi-national championship that ended in a 10-10 tie, Notre Dame had one black player, Alan Page. Notre Dame wasn’t alone. Schools limited their rosters to about six or fewer black players, even those with a long history of integration.

“We knew schools above the Mason-Dixon Line would only take so many black players,” said Boyette, a 1958 high school graduate. “A lot of guys fell through the cracks before Michigan State came along. We had three guys make the NFL off my high school team.”

Daugherty’s 1960s players were from throughout the South, including Jimmy Raye of Fayetteville, N.C. Raye was the South’s first black quarterback to win a national title at Michigan State in 1966. Daugherty was also ahead of the nation hiring black coaches. He added two Underground Railroad alums, Sherman Lewis in 1969 and Raye in 1972, to his staff.

When Raye coached briefly at Texas in the winter and spring of 1977, he learned black coaches still simmered over Royal’s 1963 comments. Raye came to Texas from Wyoming with the staff of Cowboys head coach Fred Akers, a former Royal assistant named as Royal’s successor in 1977.

“The coaches trusted me,” Raye said in Raye of Light, Page 274, of the Golden Triangle coaches. “I was able to get kids to visit and we got a couple of commitments.”

Raye never coached a game at Texas, having accepted a position with the NFL’s San Francisco 49ers in the summer of the 1977 season, but by then Royal’s progress with the help of Smith was now Akers’ challenge to continue.

Border rival Oklahoma was turning up the pressure, having beaten Texas five straight years (1971-75) in the Red River Showdown played annually at the Cotton Bowl in Dallas. Oklahoma won back-to-back national titles in 1974 and 1975 under Barry Switzer. He had been promoted from offensive coordinator to head coach (1973-88).

Switzer succeeded Chuck Fairbanks, another former Daugherty assistant, and like Fairbanks, Switzer aggressively recruited black athletes from Texas high schools. Oklahoma All-American running back Joe Washington, a College Football Hall of Famer, was from a Golden Triangle high school, Lincoln in Port Arthur. Washington was third in the 1974 Heisman voting and fifth in 1975.

Royal made strides in his 1971 recruiting class when he landed Roosvelt Leaks, the No. 1-rated high school prospect in the state. Leaks, from Brenham midway between Houston and Austin, was the first Longhorns black All-American in 1973 and went on to play in the NFL.

Royal also signed Earl Campbell of Tyler in northeastern Texas in his 1974 class, although Campbell won the 1977 Heisman Trophy as a senior in Akers’ first season.

Bubba Smith, the first pick of the 1967 NFL draft by the Baltimore Colts, explained his father’s ability to influence Royal.

“He was liked a Pied Piper,” Bubba says in the same tribute video. “Everybody he ran across liked him. I’m talking about Michigan, Baltimore and Los Angeles (Tody transferred from Michigan State to USC). Everybody around him loved him. He was honest with everybody.”

David Maraniss, Pulitzer Prize winner and New York Times bestselling biographer: “History writes people out of the story. It’s our job to write them back in.”