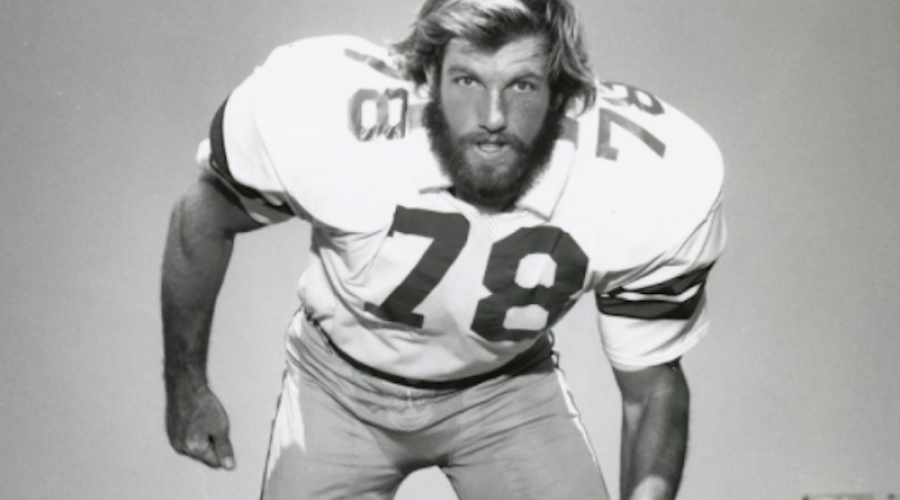 My story for the National Football Foundation’s Football Matters was published Jan. 19, 2017. Bruce, who played at UCLA and with the Dallas Cowboys, passed away Oct. 18, 2018.

The Walton surname and basketball remain synonymous from Bill Walton’s Naismith Hall of Fame career, but once there was a time when “Walton” was a football identity. That was true in San Diego and at UCLA.

Bill Walton is one of basketball’s all-time greats that grew up in the San Diego area. He won NCAA championships and national player-of-the-year awards at UCLA. He collected NBA titles with the Portland Trailblazers and Boston Celtics and was an NBA MVP and NBA Finals MVP with Portland.

But before Bill developed into a hoop icon still identified with the sport as an ESPN broadcaster, his big brother Bruce Walton was a football star. Bruce was a lineman at Helix High in suburban San Diego and accepted a scholarship to UCLA.

Walton was a three-year starter as an offensive tackle while starting 32 games. He earned first-team All-Pac-8 honors as a senior and Academic All-American honors.

The NFL’s Dallas Cowboys drafted the 6-foot-6, 251-pounder in the fifth round. He played three seasons for Tom Landry, including Super Bowl X, although the Cowboys lost to the Pittsburgh Steelers.

But despite Bruce’s success, it wasn’t long before Bill’s college and pro careers eclipsed him. Bruce says credit for their success in different sports was due their experience attending Blessed Sacrament, a San Diego K-through-8 parochial school.

“One of the parishioners was a fireman, Rocky Graciano, who adjusted his schedule to coach us in all the sports,” Bruce said. “I was big and played football, but I always loved basketball. Rocky is no longer with us, but Bill rings his bell every time he has the opportunity.”

However, it was Gordon Nash, Helix’s basketball coach, who steered Bruce to his football future. Bruce, who was 6-foot-6, 240 in high school, and Bill were teammates on Helix’s championship basketball teams.

One of Bruce’s roles was enforcer if anyone tried to rough up his rail-thin 6-11 “little” brother, but that doesn’t mean he wasn’t talented. He earned his first basketball recruiting letter his junior year from the University of Idaho. Bruce was so excited he showed the letter to Nash.

“He said, “Bruce, you’re a football player. Let it go,’ ” Walton recalled. “I went to UCLA for football. Gordon was a wise man.”

Rodgers’ wishbone offense caught on Walton’s senior year in 1972. The Bruins opened with an upset of Nebraska, the defending national champion and preseason No. 1-ranked team. UCLA finished 8-3 and ranked No. 15 with the only losses to No. 6 Michigan, unranked Washington and national champion USC in the season finale in an era before the proliferation of bowl games.

“I was fortunate to play for great college and pro coaches,” Walton said. “I never went into a game thinking we would be outcoached. That’s an interesting way to go into a game. Then all you have to do is execute.”

Bruce had a chance to play for another great coach, UCLA basketball icon John Wooden.

Wooden had noticed Bruce still loved basketball while he played on a UCLA Intramural championship team. He and some football teammates won the campus title two years in a row. Bruce said Wooden invited him out for the basketball team for what would have been Bill’s junior year, the 1972-73 season. He was tempted, but he turned down Wooden with the upcoming 1973 NFL draft.

In the NFL, Walton was taken aback by the talent on the Dallas roster that he joined for the 1973 training camp, but that’s where his academic credentials came into play. He was both football smart and book smart, having been raised by a father, Ted, who was a teacher and social worker, and a mother, Gloria, who was a librarian.

“Tom Landry had a playbook that would probably still be considered complicated today,” Walton said. “I decided I had to learn how to play every position.”

In addition to center, both guard positions and both tackles spots, he played tight end on blocking plays. His versatility allowed Landry to keep an extra skill player on the roster over an offensive lineman.

A knee injury contributed to the end of Walton’s career after three seasons, but that’s longer than were his prospects for a pro basketball career if not for his high school coach.

Walton returned to San Diego after his playing days and began a career in radio, eventually owning a station. He now works as a vice-president for Competitor Group, which stages Rock and Roll marathons and other national and international endurance races.

Bruce and Bill are long past their playing days, but the Walton name has remained fixed to a basketball identity through next generation.

Bruce’s son Kam and daughter Harmony played basketball at University of San Diego High. Kam, who went on to play at Harvard, was a teammate with two of Bill’s sons on championship teams at USDHS.

But last year Helix students were reminded of Bruce’s football background. One of the events the NFL staged to celebrate Super Bowl 50 was having veterans from past Super Bowls return to their high school campus. They received a gold football from the NFL and spoke to assembled students.

“One of my remarks was I loved my high school teachers,” Walton said. “There was stunned silence from the kids. Afterwards I was talking with friends, and I had four teachers come up to say how much they appreciated that. That was greast. I have fond memories of Helix and UCLA.”

But there is another Bruce’s football career remains associated with Bill’s basketball identity through a great trivia question. Name the only brother combination to play in a Super Bowl and NBA finals.

“Bill loves to tell people that,” said Bruce, his voice reflecting both the pride of a brother as well as the respect of a high school teammate and fellow UCLA Bruins athlete.

PBS and Through the Banks of the Red Cedar