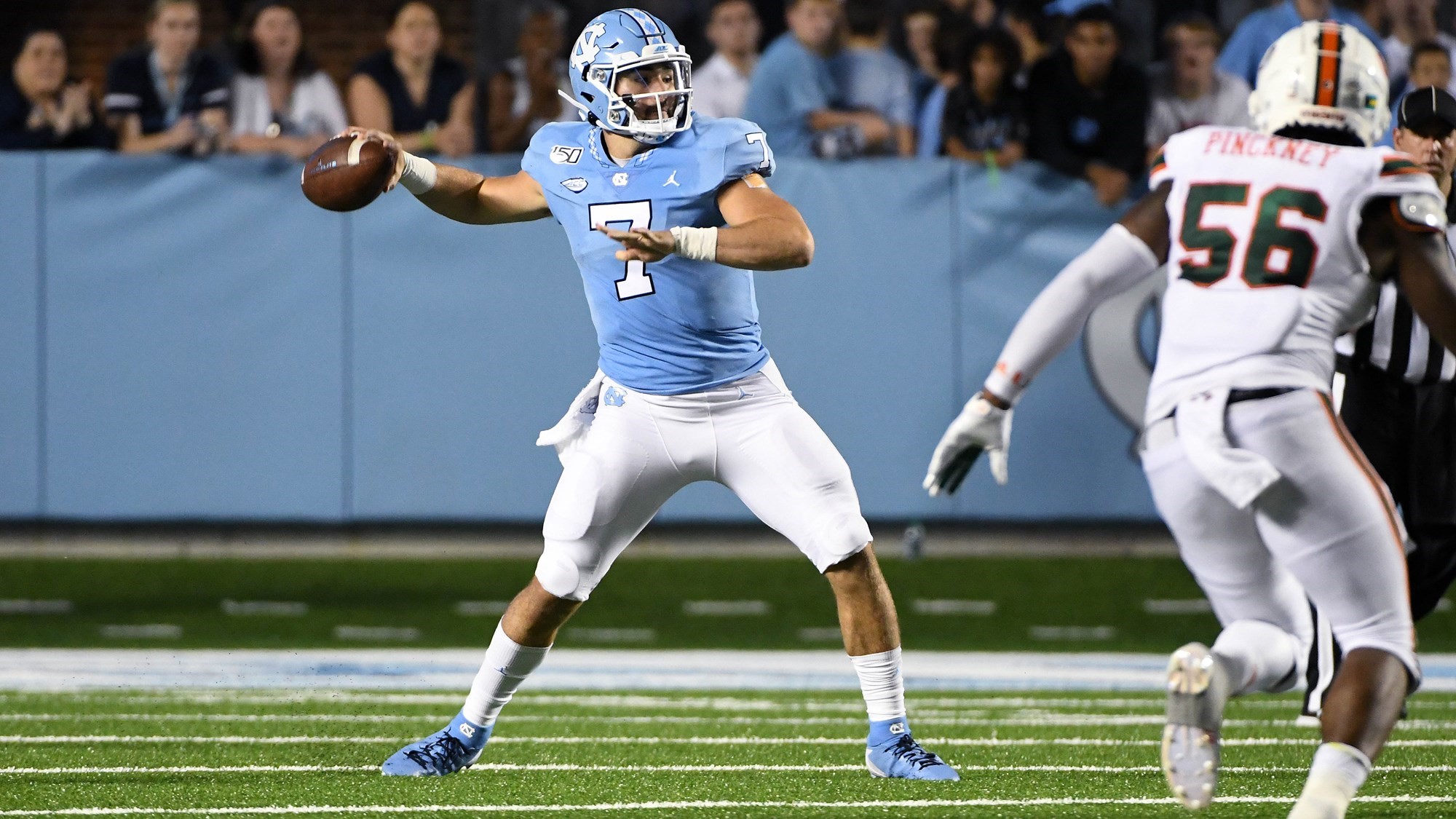 UNC PHOTO: Sam Howell threw for 3,586 yards and 30 touchdowns with only seven interceptions last year as a true sophomore.

CHARLOTTE, N.C. — North Carolina may be new to boasting a Heisman Trophy preseason leading candidate, but venerable Tar Heels coach Mack Brown has a history of navigating that road over his 16 years at Texas.

So, Brown didn’t fret over the offseason how to address the attention third-year starting quarterback Sam Howell has gained entering the 2021 season. The College Football Hall of Fame coach knows from experience teams win the Heisman Trophy for a player, not school promotions.

And it helps, Brown added, Howell is focused on winning and not personal awards.

“Sam is so good,” said Brown Tuesday during the ACC Kickoff media days at the Westin Charlotte. “He’s about winning. We’ll navigate that with him — whether it’s name, image and likeness or the awards you’re going to get. It’s about your ball, it’s not about your brand.

“If we play well, if Sam is going to play great. If we play well enough as a team around him, and we have a chance to win a lot of games, he’ll be right in the mix of that Heisman thing regardless of what we say or do. If we don’t play well as a team, it will drift away.”

In 1998, Texas running back Ricky Williams rolled up 2,335 yards en route to winning the Heisman. In 2005, Texas quarterback Vince Young was second to USC’s Reggie Bush – the disgraced winner whose Heisman was vacated for NCAA violations — although Young outplayed Bush in the national championship game that took place a month after the vote. In 2009, Texas QB Colt McCloy was third in the Heisman.

North Carolina’s preseason expectations enhance Howell’s candidacy. The Tar Heels, ranked No. 18 last year with an 8-4 record, are the preseason ACC Coastal Division favorite. If the Tar Heels win, Howell’s numbers should come with it.
At that point, Brown has to worry about walking the fine line between winning games and compiling stats to keep his star in the race among fickle voters.

The Heisman contender status can swing more easily than expected. Williams had the handicap of coming off a losing season in 1997. The losing record opened the job for Brown to arrive for the first of his 16 years following his first stint of 10 years at North Carolina.

“When we went to Texas, the previous team was 4-7,” Brown said. “Ricky said, The Heisman is not important. Well, HeismanRickyWilliams was his email, so it was kind of important, I think. I kind of noticed that as he told me it wasn’t important.”

As it turned out, Texas’ weakness on defense helped Brown keep Williams in game for ball possession.

“What we found is that Ricky was the best player on our team and was really our best defensive player because we weren’t any good on defense. But as long as he stayed on field and ran the ball, we didn’t have to go out there on defense, so it helped us.”

Williams and the Longhorns got off to a fast start in 1998 when Williams ran 215 yards and six touchdowns to beat New Mexico State. He added 160 yards and three TDs the next week against UCLA, but Texas lost. In the third game, the Big 12 opener, Williams gained only 43 yards without scoring in a loss.

The next game set up for an easy bounce back against lowly Rice, but Brown was conscious of getting Williams back in the Heisman race after the K-State game. Brown left Williams in for 30 carries, 316 yards and six touchdowns despite the lopsided win, 59-21.

“We really got into decisions like when we were killing Rice — (head coach) Ken Hatfield is a friend,” Brown said. “Ricky just gained 43 yards against Kansas State the week before. We left him in.”

Brown said he was relieved after the game when he greeted Hatfield for postgame handshakes: “Ken was great after the game: ‘I got it, you got to keep him in.’ ”

In 2005 and 2009, Texas was contending for national titles as well as featuring a Heisman favorite.

“There’s that fine line with Colt McCoy and Vince Young,” Brown said. “When you’re winning a game, how long do you keep them in for stats for the Heisman and when do you pull him out for safety and trying to get a backup quarterback ready to play? It’s a delicate path that you have to follow to try to figure out how to playing all that work.”

In 2021, it’s not just the usual Heisman hype that a coach has to worry about to keep his star played grounded. It’s a brave new world with Name, Image and Likeness. On July 1, the NCAA opened up NIL opportunities for college athletes to make money. Brown lauded Howell for keeping the focus on the team. North Carolina is seeking group partnerships, which Howell supports. Howell signed with a marketing firm with instructions to seek ways to include other players.

“I think the main thing for me is winning football games,” Howell said. “You want to take advantage of the opportunity you have. I’ve done some things, partnered with a charity called Table in Chapel Hill. We deliver meals to underprivileged kids come Chapel Hill. That’s my first partnership.

“I’m looking for more opportunities, things where I can involve my teammates, give them some opportunities as well. I think there’s a good place for it. I just want to make sure as a team we keep the main thing the main thing, and that’s winning football game.”

That’ll make it easier to leave Howell in a game when the score is in hands yet he needs only a couple more completions for 300 yards or another TD pass to satisfy the Heisman voters that rely on stats.