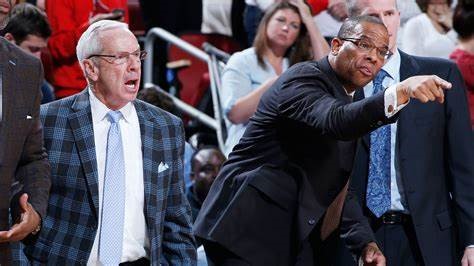 PHOTO: Roy Williams and Hubert Davis coaching from the sidelines.

All that was needed before Hubert Davis was officially introduced as North Carolina’s new basketball coach was to hear his predecessor had signed off on the promotion from assistant coach.

Turns out Roy Williams had endorsed Davis as a Tar Heel long before the Monday announcement and the formal press conference on Tuesday at the Dean E. Smith Center. If he hadn’t, Davis’ historic hiring as North Carolina’s first Black basketball most likely wouldn’t have developed.

When Davis was a senior in the 1987-88 school year at Lake Braddock High in Burke, Virginia, Williams accompanied Smith on a recruiting trip to the Davis family home. Smith, up front with recruits as always, said he wasn’t sure Davis could play for him. Davis asked for a chance.

On the trip back to Chapel Hill, Williams told Smith he was underestimating Davis. Williams told the story in a video the school released Tuesday to accompany Davis’ media session.

“I got in the car with Coach and I said, ‘Coach, I think he’ll play more than you think he will because I think he’s so competitive and so driven.’” Williams recalled. “Coach Smith a couple days later called him and said, ‘I listened to what you said and I’m going to offer you a scholarship to North Carolina.’ Hubert committed to Coach Smith right then.”

Davis, a 6-foot-5, guard, played four seasons, helping the Tar Heels to the 1991 Final Four. He then played 12 years in the NBA, worked another seven as an ESPN college basketball analyst and returned to Chapel Hill as an assistant under Williams the past 10 seasons as an assistant coach.

Although Williams never coached Davis, who left to take the Kansas job in the 1988-89 school year, the respect stood the distance and years.

North Carolina waited only four days after Williams’ surprise retirement announcement on April 1 to name Davis. He is North Carolina’s first African-American coach in football and basketball, although Everett Withers spent 2011 as an interim head coach after Butch Davis was fired over a scandal.

To not promote Davis – to not treat him as paying his dues like any other white coach – would have raised eyebrows at North Carolina than most schools. Smith had led the desegregation of the Atlantic Coast Conference when he signed Charlie Scott. Williams, like his mentor, was committed to social justice issues.

There was nothing missing from Davis’ resume but experience as a head coach. But Smith and Guthridge didn’t have it when promoted at North Carolina nor Williams when Smith urged him to take the Kansas job. Doherty had it — one successful year as Notre Dame’s head coach — and he failed, missing the NCAA tournament his second and third seasons.

Here is more from Wiliams’ video:

“Hubert, welcome to that seat as the head basketball coach at North Carolina. You will love it. I will love you sitting there. I will be here cheering. I won’t ever criticize you, I will blame it on the officials. You are the finest young man I’ve ever known in my life. This is hard because I love this program, but you love this program and have the same passion that I do and you’ll be better than me. Congratulations, son.”