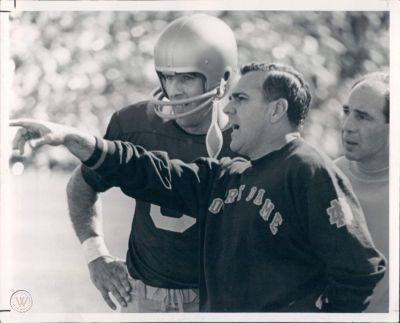 Notre Dame routed North Carolina 32-0, Michigan State needed a comeback to beat Ohio State 11-8 in a torrential rain storm at Ohio Stadium and Alabama escaped with an 11-10 win in rain storm at Tennessee.

The poll voters, going by scores rather than taking into consideration the weather and North Carolina’s inferior roster (the Tar Heels finished 2-8), flip-flopped Notre Dame to No. 1 over Michigan State at No. 2. Alabama was No. 3.

Michigan State coach Duffy Daugherty, a defending national champion by the UPI, NFF and co-champion by FWAA with Alabama (AP and co-FWAA), said he thought the objective was to win.

Most college football fans think the Notre Dame and Michigan State playing to a 10-10 in the controversial Game of the Century on Nov. 19, 1966 at Spartan Stadium decided the national title when the Irish remained No. 1. But it all circles back to the Notre Dame routing North Carolina.

The sequence of events should (but won’t) educate Alabama fans who to this day make the ludicrous claim No. 3 Alabama was denied a national title over reverse racism. They claim sportswriters in the AP poll and coaches in the UPI poll (now USA Today) voted against Alabama winning a third straight national title as a resort segregation.

What happened between Michigan State and Notre Dame in the polls is a matter for debate. But what Alabama claims is revisionist history that needs to be called out.

Alabama coach Bear Bryant was so consumed by the reverse racism claim, he had an African-American stand next to him in a red jacket so TV would see a Black face when it went to shots of the coach. Bryant never apparently thought a better idea was to recruit a Black athlete.

In 1964, Alabama won the AP and UPI titles with a 10-1-0 record, while the Football Writers Association of American named Arkansas (11-0-0) and the National Football Foundation Notre Dame (9-0-1).

Here were the sequence of 1966 weekly votes:

— Michigan State opened the season Sept. 17 with a 28-10 win over N.C. State, while Alabama and Notre Dame were off until opening their season the following week. In the Sept. 19 poll, Michigan State moved to No. 1 and UCLA to No. 2 (the Bruins routed Pitt, 54-17). Idle Alabama dropped to No. 3 and idle Notre Dame to No. 8.

The rankings were now, in order, Michigan State, UCLA, Notre Dame and Alabama.

— Then came the Oct. 15 results and the Oct. 17 poll of Notre Dame jumping Michigan State to No. 1, the Spartans No. 2 and Alabama remaining No. 3. They remained in the positions.

Although Michigan State won the 1965 titles by UPI, NFF and co-FWAA titles to Alabama’s AP and co-FWAA, Alabama was the preseason No. 1. However, the Crimson Tide were penalized for a soft schedule.

Alabama routed Louisiana Tech in the opener, 34-0. Although schools referred to these days as Power 5 routinely play FCS members, it was rare in the 1960s. Michigan State’s 1966 non-conference games were N.C. State, Penn State and Notre Dame. All 10 of Notre Dame’s 1966 games were against major schools.

Notre Dame and Michigan State were unbeaten in the Game of the Century, although they had flip-flopped their 1-2 rankings when they met. Michigan State was penalized for an 11-8 win in a torrential rainstorm at Ohio State the same weekend Notre Dame routed North Carolina, 32-0.

The Spartans and Irish played to a 10-10 tie as their seasons ended with 9-0-1 records. Notre Dame’s declined bowls by custom until 1969. Michigan State had played in the Rose Bowl the previous year and was thus ineligible. The Big Ten had a no-repeat rule and exclusive Rose Bowl contract.

The No. 3 ranking for Alabama prompted Bryant and his fans to cry reverse racism — then and to this day. Dunnavant has been trotted out with a megaphone in HBO’s film;” Showtime in 2013, “Against the Tide;” and ESPN in a 2019 film, “Integration,” that was produced for ESPN by the Herzog Co. in Los Angeles for the 150th anniversary of the college football.

In the Showtime film, Dunnavant says, “In 1966, Alabama was the only undefeated, untied team in the country and yet they finished a controversial third. It’s the only time in college football history the two-time defending national champion has gone perfect and not been awarded the national title.”

Dunnavant’s claim making the film’s final cut was an example of cavalier editing. The “two-time” claim has been overstated. Alabama split its 1964 and 1965 titles. Here were the champions named by of the four NCAA-sanctioned organizations in the era of poll voting over the three-year stretch, 1964, 1965 and 1966 titles:

— 1965: Michigan State (10-1-0) claimed the UPI and NFF championships outright and shared the FWAA with Alabama. The Crimson Tide’s lone outright title was AP.

A simple formula can be used to rank the title teams: one point for each organization title equaling a total of 12. Notre Dame finished with 4.5 points, Alabama 3.5, Michigan State 3.0 and Arkansas 1.0.

When the combined records represented by each school’s two championship seasons in the three-year span were added together, the win-loss totals and percentages:

Alabama wasn’t the clear-cut “two-time” champions that Bryant’s apologists have successfully promulgated. And don’t try and tell Oklahoma’s Barry Switzer, a College Football Hall of Fame coach who was an Arkansas assistant in 1964, the Razorbacks weren’t the best team in the nation.

But the misleading “two-time champion” narrative spread through an age-old media flaw. Bryant’s apologists captured the narrative. Media members too often follow each other without doing their own homework. CBS football analyst Charles Davis fell victim when he echoed Dunnavant in a 2019 ESPN film.

“Even with the tie, Notre Dame and Michigan State both finished ahead of undefeated Alabama in the final rankings,” Davis said. “Alabama had been No. 1 the last two years, in 1964 and 1965.”

Did Davis know those Alabama’s titles were both split?

Did he understand voters penalized Alabama for its soft schedule?

“I was a 218-pounder, and I didn’t want to block Bubba,” said Jerry West, Michigan State’s All-American offensive tackle. “Alabama’s 202-pounders wouldn’t have wanted to block him, either. Bubba, you had to go low to block; you couldn’t keep up with him strength-wise. George was impossible to block. You just hoped you could hit him.”

Those measurements likely gained Bryant’s attention if he was asked to schedule Michigan State.

“For Duffy Daugherty, it wasn’t just about being progressive and being Abraham Lincoln. Duffy was about winning football games.”

And here’s another way Alabama apologists fail to understand the truth has been shaded by the campaign to protect Bryant from his record of dragging his feet.

In the 1964 season, Alabama finished the regular season ranked No. 1 by the AP and UPI polls, but the Crimson Tide lost to No. 5 Texas in the Orange Bowl. However, bowl games were traditionally treated as rewards and national champions were crowned by votes at the end of the regular season.

In 1965, the AP experimented one year with post-bowl vote that delivered Alabama a split title. Otherwise, it finished No. 4 in the regular season.

It’s hypocritical of Bryant’s apologists to claim the 1964 national title without mentioning its bowl game loss and then turn around and own the 1965 crown as a result of Michigan State’s bowl loss.

Dunnvant’s claim Alabama was the team of the decade also has holes in it. He based it on Alabama winning three national titles, but Alabama’s 1961 crown was split with Ohio State. The only schools winning undisputed 1960s national title were USC and Texas. And they both did it twice — the Trojans (1962, 1967) and Longhorns (1963, 1969.

History shows Notre Dame won its national title with a 32-0 win over North Carolina, although Alabama media and historians have used revisionist history to make flawed claims the Crimson Tide were victims of reverse racism.

Many fan bases have come up with crazy conspiracy theories, but it’s hard to top Alabama’s 1966 cries of reverse racism.

It has been my experience, through freelance pitches, major media platforms fear challenging the established legend of Bear Bryant. Editors are content – even one that told me Bear Bryant gets too much credit — with revisionist history that has gilded Bryant’s image and aggrandized USC’s role, no matter the gaping holes in the tale. Acknowledging the Bryant mythology has holes in it also requires they’ve been duped for 30-plus years.

I’ve have researched college football integration since 2012 when I began to work on this book published in 2014:

I will put my research on Michigan State’s leading role and the 1970 USC-Alabama game’s myths and fiction up against anybody, anytime, anywhere.

My 44-day countdown on Twitter to Michigan State’s opener Sept. 3 at Northwestern