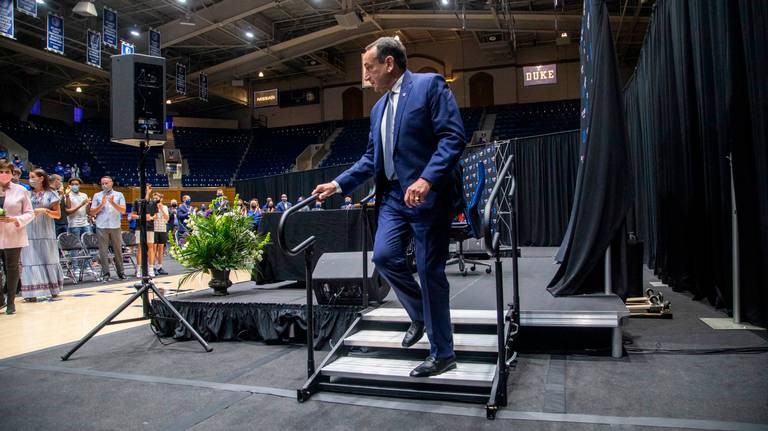 PHOTO: Coach K steps from the podium into the final summer of his final season.

DURHAM — You don’t need to read Mike Krzyzewski’s bio to know he served in the Army after he played basketball and graduated from West Point. He often says his training and leadership skills gained apply to coaching basketball teams.

Now, we’re learning that includes a succession plan for the dynasty he created at Duke the past 41 seasons. His retirement announcement on June 2 came along with the announcement his successor was in place. Associate Head Coach Jon Scheyer, who played on Duke’s 2010 NCAA title team, will coach alongside Coach K one final season before taking over in the 2021-22 season.

The U.S. Army (Ret.) captain has prepared for a succession plan since the first former player he hired as an assistant coach. He told all of them if they don’t plan to be a head coach someday, don’t take the job.

After Coach K won his fourth NCAA title in 2010 at the age of 63, the cloud of retirement and is successor hovered over the team bench each year. How much longer? The top assistant kept moving like a game of musical chairs as Krzyzewski signed up for at least another year.

When the music stopped playing with his retirement announcement, Scheyer was in the chair. The 33-year-old has been on Duke’s staff since 2013-14 as a special assistant. He was promoted to assistant coach and has served as Associate Head Coach since 2017-18.

The succession plan may have created many rumors over the years – Capel was judged the likely successor prior to taking the Pitt job in the 2018-19 season – but Coach K always planned for it to be as orderly as an Army succession.

“I was fortunate to go to West Point and be an Army officer,” he said at his June 3 press conference. “In the service, you are constantly looking at succession. When you go to a unit, you’re taking over for somebody in command and that person helps you. Continuity is what it’s called, continuity of excellence has lot to do with how you handle succession.

“The implementation of the decision has a lot to do with the succession and a greater chance of continuity. If you don’t have anybody to take command, you’re in trouble. We do. That’s one of things I was concerned about. I don’t’ want everything to end when I stop coaching. I want it to continue. The key word is succession. It’ not done a lot. In the military it’s done all the time.”

Coach K also brought up continuity with former USA Basketball Director Jerry Colangelo when he decided before the 2016 Olympics in Rio de Janeiro that it would be his last time coaching the national team. San Antonio Spurs coach Gregg Popovich, an Air Force veteran who played at the Air Force Academy, was named to succeed Coach K nearly a year before the Olympics.

“Jerry Colangelo and I met, and he said we’ll have to get another coach,” Krzyzewski said. “I said do it sooner than later. In the fall before that summer (2016 Olympics) Popp was named. He and I met. He spent time with me getting ready for Rio. I spent time with him afterwards. He’s an Air Force guy and I’m an Army guy. We understand that’s the way you do it. To me, it was plain as day, this is what we do. I speak on leadership and succession is a I a key thing.”

Coach K also explained the value of announcing his retirement with plans to coach one final season. He told the 2021 incoming recruits he could coach them, not to mention the other returning players. As Duke builds its 2022 recruiting class – an effort in Scheyer’s hands – he doesn’t have to mislead a recruit about coaching them.

“That’s why recruiting for the future is difficult, because you can’t give your word,” he said. “Jon, (assistants) Nolan (Smith) and Chris (Carrawell) can give their word and their word is golden. This next generation of teams we have will be based on telling the truth, complete transparency and putting it on the line. That’s why I think this process is the best succession we can have.”

Coach K didn’t bring it up, but an obvious comparison to consider was John Wooden’s final season at UCLA, the 1974-75 season. Wooden told a small circle of friends it would be his last season, but he otherwise kept it a secret. UCLA assistant director J.D. Morgan was forced to search for a successor, even though the job wasn’t advertised as open.

Jim Harrick arrived from Pepperdine to lead UCLA to its only national title in 1995, ending a 20-year drought since Wooden won 10 in 12 years. But his tenure ended in an NCAA scandal.

U.S Army (Ret.) Captain Krzyzewski has planned for a more orderly future than the disorder that undid UCLA’s dynasty.