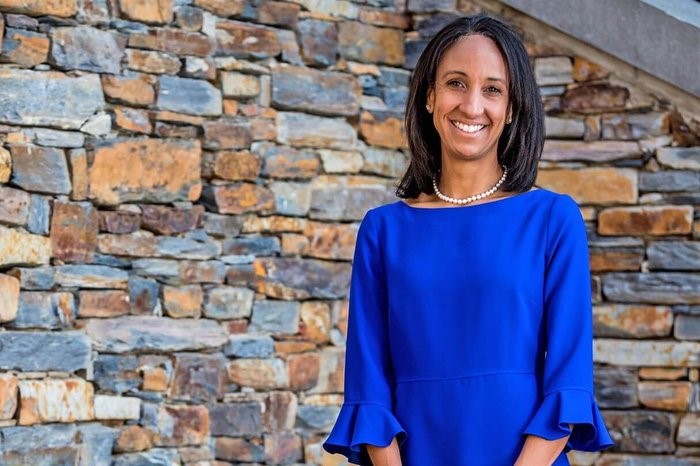 Duke introduced Nina King as the university’s new Vice-President and Director of Athletics Friday at Cameron Indoor Stadium, promoting her from assistant athletic director to a place in history as the school’s first person of color named AD.

She also represents progress as one of only three Black female ADs among the nation’s Power Five schools.

“I am a female Black athletic director,” said King. “There are only a few of us around the country. We’ve got work to do in our profession to continue to build the pipeline and ensure the deserving people have the opportunities to grow and to lead. One of the biggest reasons I am here today is to be a role model for little girls who look like me and to tell them ‘dream big because your dreams can be achieved.’ But I’m a boy mom and my message is the same to little boys. To children of all races – aspire to achieve greatness, dream big, be passionate because with dedication and hard work anything is possible.”

King said she sought advice during the interview process from the other two Black woman ADs, Virginia’s Carla Williams, hired in 2017, and Vanderbilt’s Candice Storey, hired a year ago.

“They told me to just be myself,” King said.

King, 42, wasn’t necessarily aiming to become a college athletic director two decades ago as a Notre Dame student. If she had thought about it, it wasn’t a realistic goal.

“I’m here,” King said when asked realistic ambitions now compared to two decaes ago. “It’s realistic. Young children and people who want to do this, dream big. I talk to our student athletes all the time about their in sports administration. It’s enriching career and very rewarding. There are so many different paths to getting where I am today and were I’ve been. There is no cookie cutter way to becoming an AD. If that’s what you want to do, go for it.”

Another example of progress in addition to King’s promotion was a second Black female candidate as a finalist. Lynda Tealer, an assistant athletic director at Florida, also interviewed. The search committee was headed up by G. Richard Wagoner, a former chair of the Duke Board of Trustees. The committee included Duke trustees, administrators, faculty and current and former athletes.

White wasn’t involved in the hiring process, but he is familiar with Tealer. White’s son Mike is Florida’s men’s basketball coach.

“Lynda is top shelf,” Kevin White said. “She will be an athletic director someday.”

Simply gaining an interview is another sign of progress. It was always part of the process before women joined a candidacy pool. King, for example, had interviewed for the vacant AD job at Northwestern, but the school promoted from within.

Promoting King from within was a popular decision on campus.

“I am thrilled for Nina and her family,” Duke football coach David Cutcliffe said in a statement released with Wednesday’s announcement. “She has prepared for this opportunity her entire professional life, learning from the best of all time in Dr. White. “Nina understands what it takes to build a great program on the coaching and playing side of athletics while possessing the unique ability to sit at the business, academic and legal tables comfortably.”

Duke basketball coach Mike Krzyzewski’s statement said, “This hire is an important step for the continuity of the outstanding culture that exists within Duke Athletics. Serving as one of Kevin White’s most trusted advisors for his entire time at Duke, Nina King has served our University well in whatever roles have been assigned to her.

“She has represented the Duke Department of Athletics with distinction both internally and externally, including many roles on the national stage. That national presence is important in our school’s leadership position in an ever-changing college sports environment. Personally, I have enjoyed working with Nina and look forward to working with her even more in the future.”

King, who has been at Duke 13 years, steps into a stable situation with Duke softball’s recent ACC title the sixth conference title for the school this past school year.

However, Cutcliffe is 66 and Krzyzewski 74. She may be charged with naming their successors, although Coach K no doubt will have a strong say on who succeeds him, especially with the number of former players he has coaching on his staff and throughout country.

Her most pressing matters are the financial shortfall Duke has suffered due to the pandemic canceling attendance at games and increasing costs and the upcoming National Image and Likeness decisions confronting the NCAA.