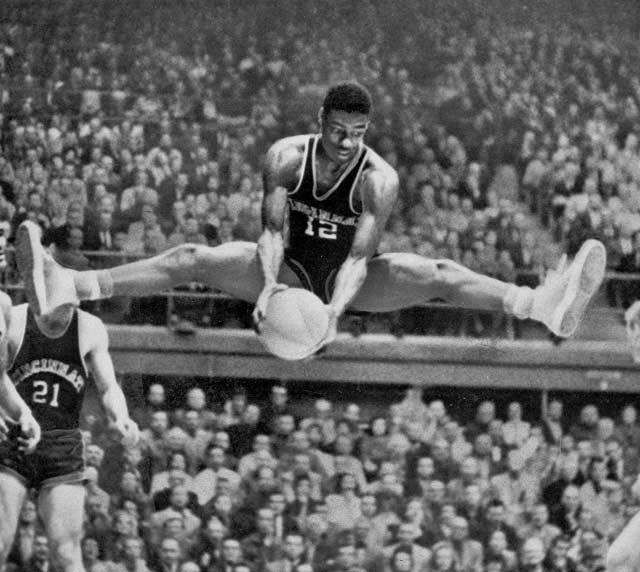 PHOTO: Oscar Robertson in a famous photo from his college career.

I wondered how many of the elite high school players — a couple that might soon be millionaires — understood the abuse The Big O and Jumpin Johnny endured to integrate Tobacco Road in the 1958 Dixie Classic. Those games were played just down the road at N.C. State’s famed Reynolds Coliseum in Raleigh.

NFL Senior Advisor Jimmy Raye, an African-American football pioneer, was a basketball fan as an eighth-grader in 1958 growing up in segregated Fayetteville, N.C. He tells me too many athletes and younger coaches he encounters, Black and White alike, view desegregation as ancient history.

Historian David McCullough explains why we should teach recent and ancient history:

“How can we know who we are and where we are going if we don’t knw anything about where we have come from and what we have been through, the courage shown, the costs paid, to be where we are?”

Raye, who was the South’s first Black quarterback to win a national title at Michigan State in 1966 and a trailblazer in the college and NFL coaching ranks, was inspired by the excitement of Robertson and Green venturing south of the Mason-Dixon Line. Both players were All-American picks; Green had played in the 1957 Final Four, won by North Carolina over Kansas and Wilt Chamberlain, and Robertson was on his way to playing in the 1959 Final Four, won by Cal with coach Pete Newell over West Virginia and Jerry West.

The Dixie Classic featured four all-white Tobacco Road schools, N.C. State, North Carolina, Duke and Wake Forest, against four teams from around the nation. Robertson, a junior, and Green, a senior, were brilliant in the 10th edition of the Dixie Classic, although No. 2-ranked Cincinnati lost to No. 5 N.C. State in the semifinals and No. 7 Michigan State fell to the Wolfpack in the title game.

Their performances, though, belied the cheap shots from opponents and verbal assaults from fans endured for the color of their skin.

“I took a certain amount of punishment, but Oscar was the national Player of the Year,” Green said. “He was the target. He was really punished. One play he went up for a jump shot and was pushed so hard he fell into the stands. I just tried to move on to the next play, but Oscar was bitter. We used to talk about the Dixie Classic when we would see each other over the years.”

After Cincinnati’s loss to N.C. State, Bearcats head coach George Smith stormed into the referees’ dressing room to cuss them out for Robertson’s mistreatment. Years later Robertson spoke openly of fans taunting him, calling him the N-word, a Red Cap and throwing hot dogs and coins at him.

Green was from Dayton, Ohio, but he had been through the South as a U.S. Marine Corps veteran; he said he knew what to expect. He told Michigan State coach Forddy Anderson he would stay home rather than be subjected to segregation. Anderson assured Green the team would stay together and eat together, but there was more to the indignity Green was to face in Green’s mind.

Hopefully, Robertson, 76, and Green, 81, take solace in the path they cleared. The first ones through the door are always the bloodiest.

The Big O and Jumpin Johnny merit an apology and recognition from vestiges of the Dixie Classic.

No school made amends better for such an unrecognized injustice than Maryland in 2013 when the Terrapins hosted Syracuse’s football team. Maryland honored the late Wilmeth Sidat-Singh, Syracuse’s black quarterback in 1937 with family members present. Sidat-Singh died in 1943 in a World War II training flight crash over Lake Huron after he been accepted into the Tuskegee Airman.

Prior to the 1937 Syracuse-Maryland game, Maryland officials informed Syracuse that Sidat-Singh could not take the field against all-white Maryland. Up until then Sidat-Singh had passed as Hindu Indian with his light skin and step-father’s surname, but he was exposed by prominent black sportswriter Sam Lacy of the Baltimore Afro-American (later Lacy was prominent for his Jackie Robinson stories).

Maybe N.C. State owes such an apology to Green and Robertson.

On that 1937 day at Maryland, one of Syracuse’s offensive linemen was Duffy Daugherty, who was destined to lead the integration of college football as Michigan State’s head coach from 1954 to 1972. Raye played for Daugherty’s 1960s Underground Railroad teams that recruited the segregated South.

In 1958 Raleigh, Robertson and Green’s appearance was preceded by a Martin Luther King speech in February before a full house of white and black citizens at esteemed Broughton High’s 1,300-seat auditorium. His words that day can be read in the Broughton gym lobby that players and fans passed through while attending the 43rd annual Holiday Invitational.

“The philosophy of segregation is directly opposed to the philosophy of Christianity and the philosophy of democracy,” King said. “It is a cancer on the body politic, and until it is removed our democratic health cannot be realized. I believe there are many more people of goodwill in the white South today than we see on the surface. I call upon them in the name of the Almighty God to stand up and make a courageous stand to make justice reality. The Christian Church has a great role to play … it must continue to make a stand.”

The late Jim Murray, a Pulitzer Prize-winning sportswriter for the Los Angeles Times, reminds us of sports’ contribution to the Civil Rights movement:

“Citadels of prejudice have been crumbled by athletics. It is the proudest chapter of its history.”

WHERE ARE THEY NOW AND THE MONEY THEY MADE

Here are the future NBA players that played in the 2014 Holiday Classic at Raleigh’s Broughton High, alma mater of Pete Maravich, and their rookie contracts. When they cashed their checks, they stood on the abused shoulders of Oscar Robertson and Johnny Green.

They signed deals for a total of $67 million.