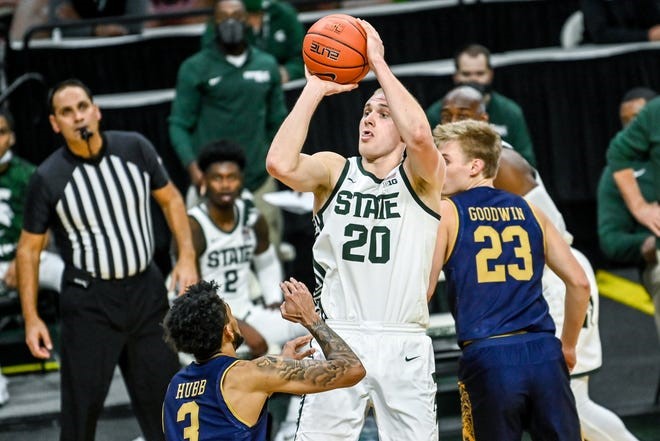 One matchup to watch when Michigan State and Duke play is between a pair of 6-foot-9, 220-pound forwards from Wisconsin. They can play it big or small, they can score, rebound and pass.

They are key position-less players added to deep and versatile rosters of teams searching for an identity from a year ago before the No. 8-ranked Spartans (2-0) and No. 6 Blue Devils (1-0) meet in the State Farm Champions Classic at 7:30 tonight at Cameron Indoor Stadium.

So far, Johnson, a freshman from Milwaukee, has had the more impressive start with 19 points and 19 rebounds in Duke’s 81-71 victory Saturday over Coppin State.

“In the last couple of scrimmages, he’s had high double-figure rebounds,” Krzyzewski said following Saturday’s game. “He had 17 in our last scrimmage and he’s getting stronger in the ball. In congestion, he had seven turnovers. He’s 19 of 19 … that’s a heck of a first-time performance for anybody but especially a freshman.”

Johnson was the only Duke player selected to the preseason All-ACC team, while sophomore guard/forward Wendell Moore (6-5, 216) was a second-team pick. The Spartans had only one player, guard/forward Aaron Henry (6-6, 215), on the 10-man preseason All-Big Ten team.

Hauser, after a so-so opening night against Eastern Michigan, turned in a stronger performance in Michigan State’s 80-70 win on Saturday over Notre Dame. He finished with 10 points and 16 rebounds – 12 in the first half. Izzo thought a difference was Hauser listening to coaching when he came to the bench.

“I thought he REALLY responded well,” Izzo sad. “We had great conversations on the bench.”

But having laid out the scenario, that probably means some someone else will take over the game. Both teams are that deep and versatile.

“I think we match up at just about every position,” Izzo said. “Jalen Johnson is a heck of a player, yet we’ve got enough bigs to match them.”

Two of Duke’s three guards are freshmen, D.J. Steward and Jeremy Roach, while Michigan State started fifth-year graduate Joshua Langford and junior Foster Loyer in the first two games. But the Blue Devils’ youth may not as matter as much as it seems on the surface.

Michigan State’s experience comes with question marks. Can Langford (6-5, 200) regain his junior season form that had him possibly leaving for the NBA? He looked more comfortable against Notre Dame than EMU. Can Loyer (6-0, 175) prove he can stay on the court defensively against elite guards?

Sophomore Rocket Watts played the Langford’s off-guard role last year alongside All-American point guard Cassius Winston, a second-round NBA draft pick. A bone bruise to Watts’ knee in preseason practice was one reason the Spartans started Loyer the first two games. Loyer is listed the same as his freshman year, but he looks closer to that size now, with two years of maturity, than he did as a smallish freshman and sophomore.

Steward (6-2, 163) and Roach (6-1, 175) aren’t as physically imposing as some Big Ten guards that Loyer has struggled against, but Duke also has Moore’s “Big Ten” size to mix into the rotation.

Yes, Duke is young, but Steward is a possible NBA lottery pick and Roach was a 4-star recruit. None of Michigan State’s guards are projected NBA draft picks at this point of the year, although small forward Aaron Henry (6-6, 212), who can shift to a guard role, is a projected second-rounder.

Steward scored 24 points in his college debut while playing mostly an off-guard role, but he also has worked at point guard throughout preseason practice along with Roach and senior Jordan Goldwire. Coppin State’s five-guard offense limited how Coach K used his roster. Steward also said the Blue Devils want to run more than they did against Coppin State, but 22 turnovers limited their opportunities.

Duke opponents that underestimate the Goldwire, who was bound for East Tennessee State until a late offer from Duke, pay for it. He’s not an explosive scorer, but he is athletic and strong on defense. Last year he played the off-guard role alongside point guard Tre Jones while also spelling Jones. He can play either role alongside Steward or Roach.

Izzo indicated Monday in a media session Michigan State isn’t one of those schools overlooking Goldwire.

“Goldwire has been a thorn in our side,” Izzo said. “He’s very, very good defensively – a solid player.”

The biggest difference for Duke between the first game and facing Michigan State will be the Blue Devils playing a bigger lineup. With Coppin State utlizing five guards, Duke’s 5-star freshman center, Mark Williams (7-0, 243), was limited to four minutes and two points.

Duke can go bigger at times with Williams, sophomore forward Matt Hurt (6-9, 220) and Johnson. The Blue Devils started Hurt, Johnson and Moore. Two more highly recruited freshmen inside players that will likely see more time are Henry Coleman II (6-7, 229) and Jaemyn Brakefiled (6-8, 216). Coach K has been happy with both of them in preseason practice.

Two more Duke players that could play a bigger role are Patrick Tape (6-9, 233), a graduate transfer from Columbia, and guard/forward Joey Baker (6-6, 201). Tape didn’t get off the bench, while Baker, who started over Steward because of his experience, was limited to 15 minutes and two points. Baker is a streak shooter who hurt the Spartans last year, scoring 11 points on 5-of-6 shooting in Duke’s 87-75 win in the ACC-Big Ten Challenge played Dec. 3 at the Breslin Center.

Bingham has gained weight and strength and worked on his inside game to go with his three-point shooting ability. Depending on his play in the paint, he has more scoring ability than Kithier or other options down low.

In the coaching matchup, Coach K is 12-2 against Izzo, but the teams have split their last two games. Michigan State upset Duke in the 2019 Elite Eight game for Izzo’s eight Final Four trip.

Hubert Davis slides over on bench to succeed Roy Williams