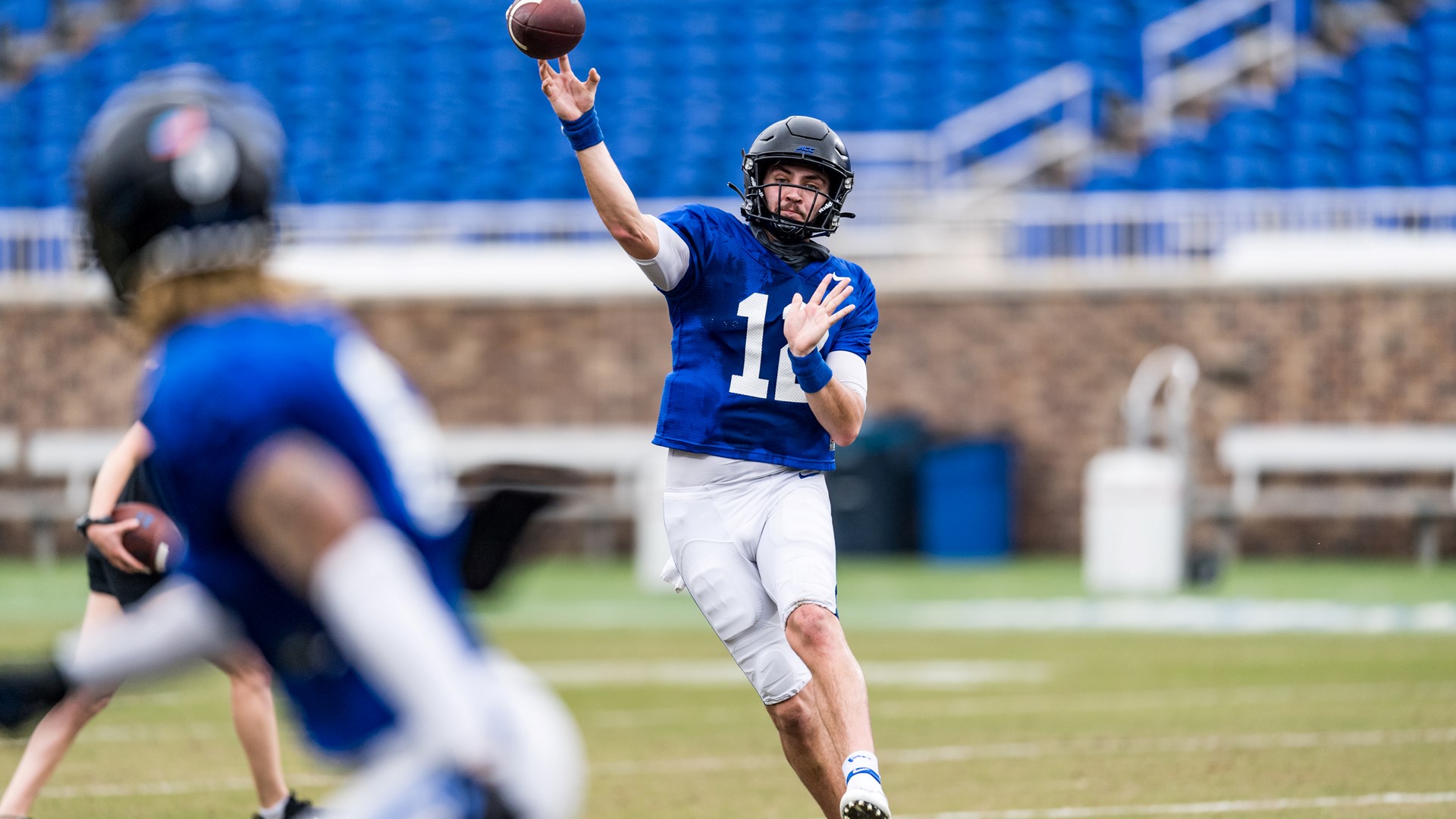 Gunnar Holmberg, quarterback and patience were unrelated words in his high school career. Holmberg earned the starting quarterback job as a sophomore at Heritage High in Wake Forest.

His arm and legs were the primary reason Heritage, an upstart program, was able to challenge state power Wake Forest High as well as it did in conference showdowns. He wasn’t afraid to throw deep or to tuck the ball and run.

But now that he’s in his fourth year at Duke as a redshirt junior, Holmberg said the patience that he never previously needed has been the reason he’s in position to earn Duke’s starting job in 2021. He met with the media in a Zoom call following the Spring Showcase Saturday at Wallace Wade Stadium. The Blue Devils still have more practices before concluding spring drills, but he discussed the scrimmage and his progress.

The 6-foot-3, 205-pounder finished the day at Wallace Wade Stadium completing of 5-of-7 seven passes for 107 yards and one touchdown, an 80-yarder to junior wide receiver Jalon Calhoun.

“When you go into a college football program you can never expect it to go the way you have it planned in your head,” Holmberg said. “But being able to adapt and lean on your guys, your teammates who are your best friends when you’re here, has helped me get through that. I’ve been blessed with patience. That goes a long way.”

Holmberg’s first year on campus in 2018 he expected to watch and learn as a redshirt under Daniel Jones, a first-round draft pick by the New York Giants.

Holmberg’s first chance to compete for playing time was 2019, but he suffered a knee injury shortly before the season opener. That ended the competition with Chris Katrenick as the backup to redshirt senior starter Quentin Harris.

But now, after Duke’s 5-7 record in 2019 and 2-9 mark in 2020, Holmberg’s future is looking bright again. Rosters change quickly in modern college football. Katrenick left the program midway through the 2020 season when Holmberg showed signs of passing him on the depth chart. Then Brice left after just one season as a transfer to Appalachian State.

“When you have an injury and a transfer comes in, those are big things,” Holmberg said. “I think with how comfortable and how close I’ve felt with the guys it’s been a blessing in disguise, the time it took. You’ve seen it work out here for guys. Anthony Boone was a starter until his redshirt junior year. Thomas Sirk was a starter. The path has been set before me that I’ve seen. Quentin Harris was a great leader for us and he was great to learn from, even when I was injured. Patience goes a long way. You’ve got to see the light at the end of the tunnel and try to find a way enjoy the process. I think is the biggest thing.”

Holmberg’s legs provide Duke with more of the dual-threat quarterback talent the Blue Devils turned away from a year ago with Brice under center. Duke redshirt freshman Luca Diamont, who was 2-of-3 passing for 26 yards and ran for 22, also is a dual-threat QB.

Holmberg’s touchdown pass started out as a short pass until Calhoun put on some moves and took it the distance to the end zone.

Another explosive play for a touchdown was redshirt sophomore running back Jordan Waters’ 51-yard score.

Duke struggles with another slow start and comeback that falls short