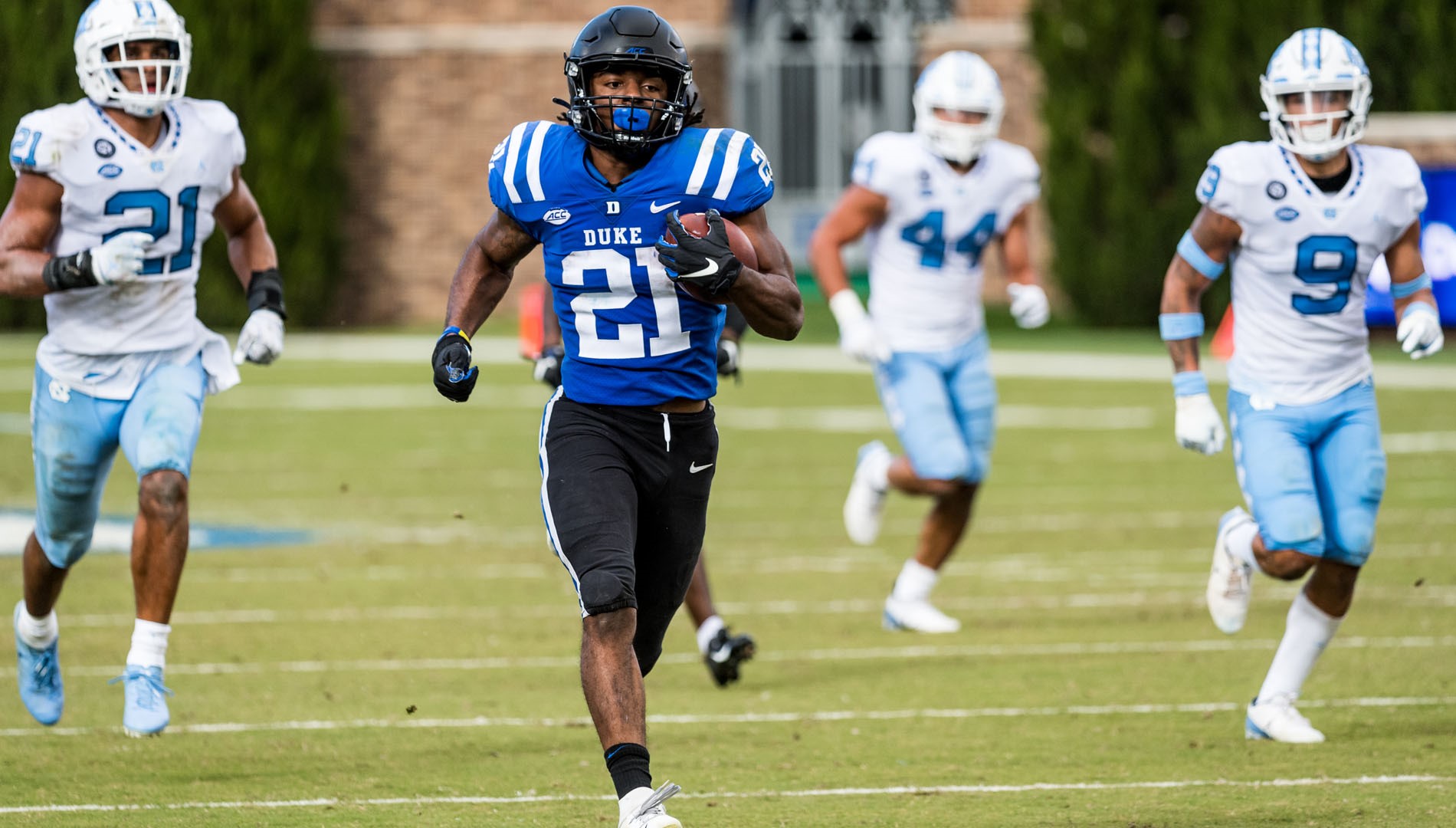 PHOTO: Mataeo Durant one one of his breakaway runs.

Duke can’t afford to miss spring football again. Not after last year when they finished 2-9 overall and 1-9 in ACC play with a reshuffled offensive line and a new quarterback that failed to develop cohesiveness.

The Blue Devils face the same challenges this year.

Last year’s shutdown was nationwide due to the COVID-19 pandemic. With the country emerging, slowly, from pandemic limitations, Duke seemed positioned as well as any school to get in a full 2021 spring. The Blue Devils weren’t responsible for any missed games or lost practice time last fall.

But just three workouts into 2021 spring football, the real world struck again. The program was put on pause due to a cluster of positive tests. The campus was placed on a “stay-in-place” order following a campus breakout blamed on unauthorized Greek fraternity parties.

The pause has ended with practices resuming Wednesday, Friday and Saturday, but the Blue Devils need to finish their spring if they hope to build the cohesion they never found a year ago. Duke senior running back Mataeo Durant met with the media in a Zoom call and discussed how relieved the players were to get back on the field without an extended layoff.

“We were hoping it wasn’t another episode like last year when we weren’t able to get preparation that was key to having a successful season,” Durant said. “Going back out there, there was enthusiasm to get back to work.”

The 6-foot-1, 195-pounder from McCormack, S.C., has the talent to perform as a featured back. He led the team in rushing and was seventh in the ACC with 817 yards despite fewer carries than starter Deon Jackson, who has graduated.

Durant also led the team in yards per game (71.3) and rushing touchdowns (eight). He caught 12 balls for 107 yards and one touchdown. He showed explosion with a long run of 64 yards and scoring runs of 49 and 46 yards.

But Duke lacked the ability to sustain drives and keep its defense off the field. The time of possession advantage for opponents was 31:26 to 28:34. Duke fell short of opponents in third-down conversions, 38.7 to 41.3, and fourth-down conversions, 47.8 to 66.7.

Duke will no doubt be ranked low in all the preseason ACC rankings for its lack of offense and having to name a new starting quarterback again, with Clemson graduate transfer Chase Brice having transferred again, this time out to Appalachian State. Redshirt junior Gunnar Holmberg was Brice’s backup while Luca Diamont saw limited snaps as a true freshmen.

But Durant expressed confidence in the offensive line coming together to take the pressure off the passing game and third-and-long situations.

“That’s very important,” Durant said. “Everything starts up front. I’m very confident in the offense line we have coming back. We have a lot of experience on the line. Coach (Greg) Frey has done a great job in the spring teach them the new things that we’ve put in. I think up front we’re solid up. As a team, as a full team, we have to be consistent. I think our line will do well. We have leadership coming back.”

Frey is in his second season as the offensive line coach, but he wasn’t able to work with the Blue Devils on the field until fall camp opened. Duke not only returns full-time starters Casey Holman (6-4, 280) and Jacob Monk (6-3, 310), senior center Jack Wohlabaugh (6-4, 305) is back after missing 2020 with a knee injury.

Wohlabaugh was honorable mention All-ACC in 2019 and ranked a Rimington Award candidate for the nation’s top center in the 2020 watch list. His loss meant that by the end of the season, true freshman Graham Barton (6-6, 315) gains starts at center and Maurice McIntyre (6-2, 300) at guard. Barton played in six games and McIntyre nine.

“Coach Boyette is a great coach in any position, and he has best interests of the team,” Duran said. “Right now, we’re in early stages of learning things (Magee) wants us to do — the different techniques he teaches his running backs over the years. So far we love the way he coaches. He’s so enthusiastic every morning. We find it easy to gravitate toward him and follow his lead as he coaches.”

The Blue Devils play their spring game on March 27, but they can make up missed practices afterward.