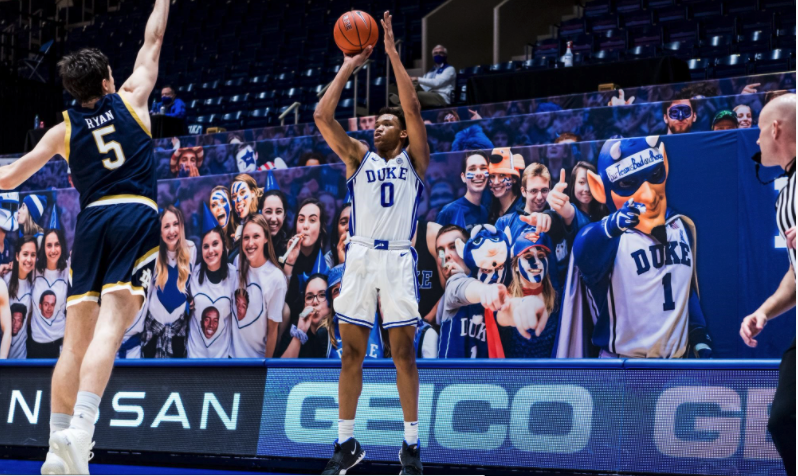 Duke’s basketball roster lacks a Christian Laettner or Grayson Allen. Not even a J.J. Redick.

In other words, there are no villains to dislike.

Duke has plenty of jealous college basketball enemies for winning five national titles and advancing to 12 Final Fours under coach Mike Krzyzewski. Fans and media are also quick to jump on Coach K when he slips up with a comment or they think he did, but he’s used to that.

But these Blue Devils are a bunch of good guys carrying the weight of expectations. You’d have to be a sadist to enjoy the anguish of this group of guys as the Blue Devils (7-8, 5-6 ACC) dropped below .500 with a 93-89 loss to Notre Dame (8-10, 7-8 ACC) Tuesday night at Cameron Indoor Stadium.

They are U.S. Capitol Police facing Trump insurrectionists. They’re usually in a position of power, but they suddenly find themselves struggling with unexpected circumstances.

Duke sophomore Wendell Moore, who is rebounding from a slow start to the season, scored 24 points, but that meant he drew the short straw to take a seat in front of the Zoom post-game media camera. It’s getting old, but he remained patient.

“We’re not doing a good job defending the three and we’re putting teams on the line too much,” Moore said. “I don’t know how many free throws (Notre Dame) missed, but it wasn’t very many. And they got a lot of threes, which is exactly what they want. For some reason teams shoot threes really well against us, so we have to find a way to combat that.”

Moore added 10 rebounds and three assists for his second double-double of the season. But Duke has now lost three in a row after impressive back-to-back wins over Georgia Tech and Clemson.

“I’ve been sick of losing since our first loss,” Moore said. “We all hate losing. At this point in our season, and Coach (Mike Krzyzewski) says it all the time, we have no choice but to get better. We just have to keep fighting, keep playing hard. Things are going to start going our way.”

Notre Dame represents in a nutshell what a confounding season this has been for Duke. On Dec. 16, the Blue Devils bounced back from losses to Michigan State and Illinois with an impressive 75-65 win over the Irish in South Bend.

But in the rematch, North Dame overcame a 50-45 deficit to win its third of last four games and fifth of last seven. Junior guard Cormac Ryan, a Stanford transfer, scored a career-high 28 points, driving to the basket and hitting 4-of-7 three-point field goals.

But Coach K, who turns 74 next week, is still driving his young team to turn the corner. Not a veteran coach frustrated there will be no sixth NCAA title – maybe not even a 25th straight NCAA Tournament trip.

“Our kids came ready to play,” Krzyzewski said. “They’ve been working. This will pay off at some point if you stay with it. There are times in our program where you learn to appreciate the winning that has come at such a high level and how tough losing is. We as a program need to keep learning that and keep appreciating what it takes to win. You don’t do that by not working hard.”

“I really think the confidence level is good otherwise we wouldn’t be scoring and competing like we are,” Krzyzewski said. “In losing close games, we have to be careful that they do not lose their confidence. It’s really disappointing for them; for me too. But you want this to happen quicker for them than it’s happening. I’m on their side forever and we’re going to keep going and keep pushing. That’s what you should do and it’ll pay off at some time. It’s not paying off for wins right now.”

My N&O story: An old high school splits into a new rivalry