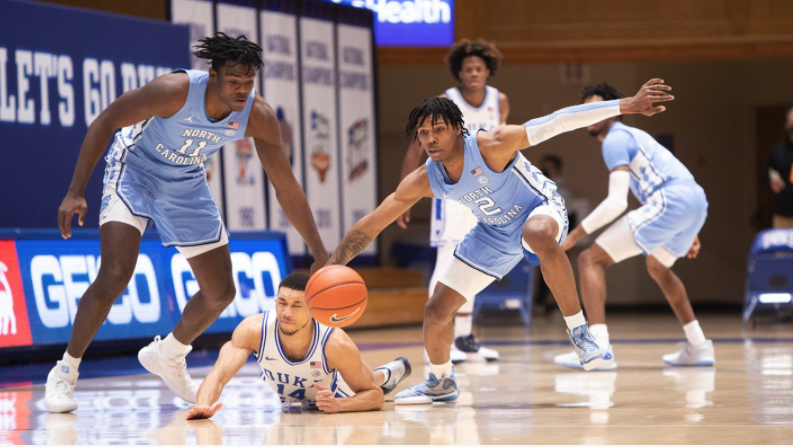 Any other year — well, at least in the past 61 — North Carolina’s 91-87 win over Duke Saturday night at Cameron Indoor Stadium would have been crowned an instant classic. It’s replay schedule on cable would be tweeted out.

UNC freshman guard Caleb Love would be mentioned in the pantheon of Tar Heel guards alongside Charlie Scott and Phil Ford.

Love not only scored a season-high 25 points, he became the first North Carolina player to score 25 with seven assists on Duke’s hallowed Cameron court. The only other two times in the Battle of the Blues were Scott in 1969 and Ford in 1976 — both at UNC’s Carmichael Arena. Scott scored 34 with nine assists and Ford 28 and eight.

Elite company to join for the 6-foot-4, 195-pound guard from St. Louis, but in 2020-21, what it means to the rest of the season unknown. The 254th showdown was shadowed not only by no fans during the pandemic, it was the first time the two teams met since Feb. 27, 1960 without either one ranked.

This wasn’t about first place in the ACC, earning a No. 1 seed in the NCAA Tournament or even a No. 1 national ranking. This was about North Carolina and Duke meeting as unranked teams for the first time since Feb. 27, 1960.

The Tar Heels took a step forward with the win, but just as Roy Williams cautioned his team hadn’t “turned the corner” with five of six ACC wins before its loss on Tuesday at Clemson, he tempered Love’s performance.

“Caleb did some really good things tonight,” Williams said. “If you take away his five turnovers, it would be his best game. But a point guard cannot have five turnovers. Now you say, ‘Oh well, he had 25 points. That’s pretty doggone good.’ That’s his career high so that’s pretty doggone good. I think I kept him on the floor, he played almost 31 minutes. He did some really good things, made some big shots for us, made a couple of big free throws down the stretch as well.”

For this game, we were spared ESPN’s Dick Vitale screaming about the greatest rivalry in sports, baby! Instead of Vitale suggesting he’s never heard of the the Army-Navy football rivalry, Bilas gave us a break down of how basketball is strategized in such a close, tense contest and what crucial plays meant to the game – not to mention the game to the season.

Example: North Carolina was clinging to a 86-81 lead when Love was pressured by Duke’s Jordan Goldwire, the ACC leader in steals, crossing halfcourt. Love dribbled left to right, was cornered and threw the ball out of bounds with 1:26 remaining in the game.

Bilas: “He’s got to get rid of the ball. He’s going against Goldwire. That’s a turnover waiting to happen. It’s not a good situation for North Carolina to have Caleb Love trying to dribble against Jordan Goldwire.”

But there was no dramatic finish, just as this hasn’t been a dynamic season for either team. North Carolina led 89-87 when Moore drove the basket, but he turned it over on a travel call with nine seconds left. Moore was up in the air and unable to get off the shot before coming back down to the court.

Moore, after a slow start to his season, finished with 15 points and a season-high 4 assists. Both teams have reasons to be encouraged about the final month.

Duke finished with five players in double figures, even though leading scorer Matthew Hurt (18.0 points a game) was in foul trouble early and was held to seven. Roach led the Blue Devils with 16 points, Jalen Johnson scored 14, Steward 11 and Joey Baker 11 off the bench.

Duke, at a size disadvantage, started freshman Mark Williams (7-0, 243). He contributed a career-high eight rebounds as well as three blocks but only two points.

August Publications announcing plans to order “THE RIGHT THING TO DO”