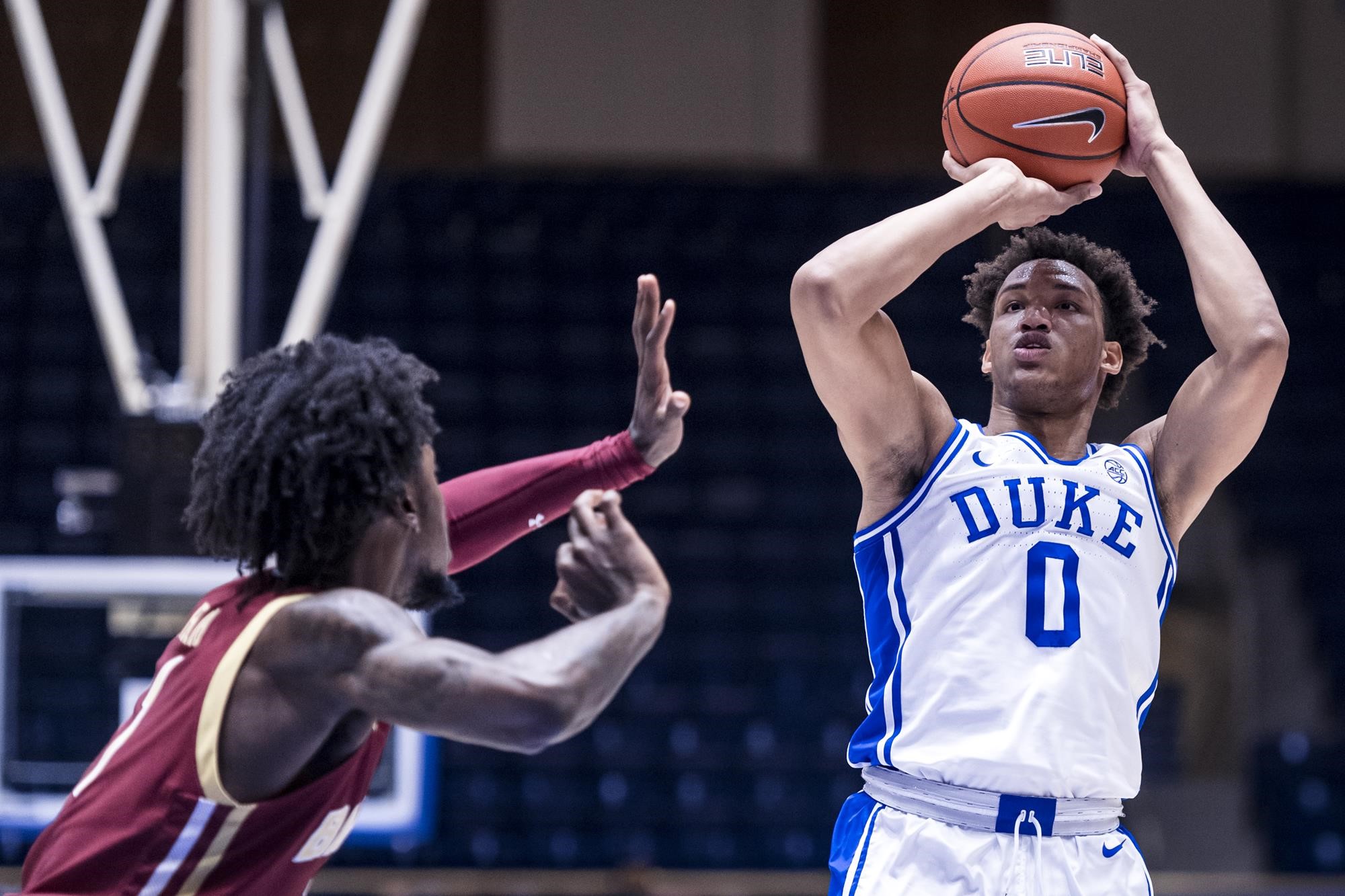 Wendell Moore didn’t shrink from the challenges – emphasis on plural.

Moore snapped a season-long drought when the sophomore scored 25 points to lead the Blue Devils past Boston College 83-82 on Wednesday night at Cameron Indoor Stadium. The 6-foot-5 guard/forward had scored only 19 points in the season’s first five games, a slump that cost him his starting job.

“The biggest thing for me is my teammates were behind me the whole time,” Moore said. “Even though I was going through the struggles, they always had my back, they kept believing in me, kept giving me the opportunity, and I’m glad to make them proud tonight.”

But Moore stood up and represented his young team in an important off-court manner a week earlier. He was the player that met with the media in a virtual phone call on Dec. 31 as the Blue Devils prepared to travel to Florida State, although the game was later postponed due to COVID-19 testing at FSU.

Many players would have shied away from being asked to sit in a chair and having to answer questions about his team’s losses — not to mention his own struggles. But Moore accepted the responsibility. He explained in his post-game session support from his teammates allowed him to play the leadership role.

“They kept pushing me in practice and kept telling me to lead,” Moore said. “Their confidence in me gives me confidence in myself that I can go out there and speak for the team. I know they’ll be behind me 100 percent of the time.”

Moore also could have slipped into a malaise after losing his starting role, but he came off the bench for the third time to hit 8-of-13 shots with 2-of-3 from three-point range. He also could have been distracted by head coach Mike Krzyzewski’s absence due to COVID-19 protocols that required him to isolate after exposure. Long-time assistant Jon Scheyer served as head coach in an interim role.

He hit a contested long-range jumper to beat the shot clock for an 80-77 lead with 44 seconds to play. Two free throws by senior Jordan Goldwire with 24 seconds left and two more by Moore with 11 seconds remaining provided the winning points.

“Extremely proud of Wendell,” Scheyer said. “Clearly, he’s not played well, but he’s worked his butt off. He’s gotten up in the morning basically every day we practiced with Coach (Chris) Carrawell and they’re working.

“There’s been a lot of noise for these guys, whether it’s on social media or elsewhere. He’s able to block out the noise and kept working. Wendell’s always at his best when he’s playing defense talking and leading. At the start of the game, he did that. His offense came along as well. I can’t tell you how proud we are of him. He saved us throughout the entire game.”

Duke, which trailed by 16 points in the first half, also overcame a three-week layoff from its most recent game to improve to 4-2 overall and 2-0 in the ACC. The Blue Devils are scheduled to play Wake Forest at noon Saturday at Cameron.

Duke last played on Dec. 16, winning its ACC opener at Notre Dame with an team impressive performance that at the same Moore’s continued slump. Krzyzewski had canceled non-conference games to allow his players to return home, a break from their isolation on campus dating to August.

Duke’s Carter fills out his position for trip to Charlotte