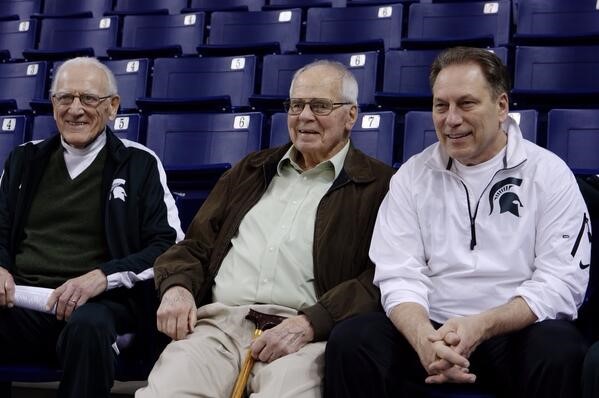 Part I, Monday, Nov. 18: How the Spartans and Hokies made the Maui field and more on Buzz Williams and the Odom family with Virginia-Chaminade and Virginia-UMBC

Dave Odom is a basketball elder statesman that knows his sport’s history. He was aware only three Michigan State coaches have led the program somewhere around a half-century, but he needed to be told the exact number of years.

— Tom Izzo has been the coach the past quarter-century since succeeding his mentor.

“That’s incredible,” said the retired coach, best known for his 13 seasons at Wake Forest in a 43-year career starting on high school benches and through his college stops. “I don’t know if there is any other school like it.”

But this season is unlike the previous 50.

It’s the first since 1969-70 that BOTH Ganakas and Heathcote are no longer with us. Their presence allowed for Spartan Nation to reminisce and for Izzo to lean on their support and wisdom anytime he sought it.

“You look at Tom’s success and you have to look back to the influence of Jud Heathcote and Gus Ganakas,” said Odom, the Maui Jim Maui Invitational tournament director that included the Spartans in this year’s Nov. 25-27 field. “That place is an oasis. They don’t turn over coaches or players. I don’t know what it is about Michigan State or East Lansing, but there is something appealing about coaching and playing there.”

A case can be made it started with the effervescence of Earvin “Magic” Johnson. He makes everyone feel they’re part of a winning team. Then mix in Ganakas’ unabated hopefulness and ability to push away the natural human emotion of bitterness.

The back story is Johnson was a hometown kid from Lansing Everett that never planned to play anywhere but for Ganakas at Michigan State. Until, that is, the coach he grew to respect from attending his summer camps was fired.

At that point Johnson might have been lured to play for Michigan or another top national program, but Ganakas bridged what could have been Grand Canyon divide.

A lesser man might have undermined Michigan State and his successor, but Ganakas stood by his alma mater. That characteristic is exactly what Izzo cited after Ganakas died.

“You’ll learn all you need to about Gus when you look at the way he handled being replaced as head coach,” he said. “Most of us would have wanted our replacement to fail, hoping it would make us look good. But that wasn’t who Gus was.

“Instead, he made sure that the local high school superstar Earvin Johnson knew that Michigan State was still the right place for him to attend and that new coach Jod Heathcote was the right guy to play for. As they say, the rest is history. There is no doubt that Spartan Basketball wouldn’t be what it is today without Gus Ganakas.”

Izzo joined Heathcote’s staff in the 1983-84 season as unknown 28-year-old “Yooper” from Michigan’s Upper Peninsula. Izzo never left his seat next to Heathcote, spending 12 years as his aide before the torch was passed.

Ganakas was a radio analyst into his 90s until he decided to limit himself to home games in the 2016-17 season. He retired fully before the 2017-18 season, although Izzo welcomed him to attend practice and even sit on the Michigan State bench if he wanted.

Ganakas’ MSU ties began as a student in 1946 when he returned home from World War II, having fought with the U.S. Marines in the Battle of Okinawa. He became a teacher and coach at East Lansing High, winning a state title an unbeaten team in 1958.

He first worked for Michigan State in 1964 directing the Ralph Young Fund, now known as the Spartan Fund. He returned to the bench at Bennington’s invitation for the 1966-67 season. He was suddenly promoted three years later when Bennington died from a heart attack on Sept. 10, 1969.

“He was a special man that was ahead of his time recruiting young black men from the inner-city to play Big Ten basketball and earn a degree from a prestigious university,” said Benny White, a guard from 1972-73 to 1975-76 out of Detroit Northern. “That wasn’t happening a lot in the early 70s. He put on that hat on and carried it well. He was a great guy that never said anything bad about anybody. He was always s positive. I admired him for that.”

Most college basketball rosters were predominately white in the early to mid-1970s. Indiana’s 1974-75 roster that lost in the Elite Eight had only four black players. The Hoosiers’ 1975-76 team, which remains the last unbeaten NCAA champion, numbered only five black players.

But the beginning of the end for Ganakas was the 1974-75 season. Ten African-American players walked out prior to playing No. 2-ranked Indiana, coached by Bobby Knight, on Jan. 4, 1975 at Jenison Fieldhouse.

Ganakas later reinstated the players and the Spartans went on to 17-9 record, but the damage was done. He was given another year before he was let go after a the 1975-76 season in athletic department house cleaning that included pushing football coach Denny Stolz out the door for NCAA penalties and probation.

The walkout was viewed as a racial issue when team captain Lindsey Hairston informed Ganakas at a morning team meeting they wanted 6-foot-4 black senior Thomas McGill to start over 6-7 white freshman Jeff Tropf. But White maintains the walkout thoughts began with frustration over a lack of financial support for the basketball program to compete in the Big Ten.

“The purpose of the walkout was good,” White said. “We knew it wasn’t about us but about the program. I’ve told Coach Izzo that a lot of things that have happened in the program wouldn’t have happened without it. We knew it was a risk, but we felt changes needed to be made in (funding) Michigan State basketball.”

During the same period, Daugherty had lamented a lack of financial support contributed to him retiring following the 1972 season, his 19th. He stated in his 1974 book “Duffy” that funding had declined to the bottom of the Big Ten along with Northwestern.

“We were practicing in a second-class facility,” said White, who is now a coach at Birmingham Groves. “We used to practice in our sweats because the doors in Jenison were open. People were running on the track. What I regret is the hurt and embarrassment we brought to Coach Ganakas. But back then we lived in times when making a stand was taken more importantly and treated with more than respect than these days.”

Knight learned of the walkout when his team arrived at Jenison Fieldhouse for the afternoon game. He asked Ganakas how he could help, including offering to have Quinn Buckner, the Hoosiers’ team leader and an African-American, speak to the Spartans.

Ganakas thanked him and declined, explaining the players were suspended at the time, and he was still processing his future course of action.

An Indiana graduate assistant that season was Duke coach Mike Krzyzewski, who had played for Knight at West Point and retired as a U.S. Army captain. Although Krzyzewski didn’t travel with the team that day, he gained an early lesson on coaches supporting each other.

“During that time, Coach Knight especially, everybody coached for the same reason,” said Krzyzewski after a Duke game early last week. “It was for the love of the game and love of the kids. That’s not why everyone is in coaching now.

“You showed empathy for everyone in the game. If someone was having a problem, you reached out. It wasn’t about money or fame or whatever. It was about the game. People had passion and love for the game and they took care of each other.”

Odom, who says he met Ganakas at a Final Four, wasn’t surprised by Coach K’s comments.

“Basketball coaches are a fraternity,” he said. “They will fight and contest and scrap with each other in a game or over a recruit, but when the game or the season is over they’ll put their arms around each other and walk off into sunset. I think basketball and baseball coaches are closer. I don’t think it’s like that with football coaches.

Something else Izzo did with the needle and thread Heathcote handed him was weave deeper into Michigan State history to include College Basketball Hall of Fame coach Pete Newell and his players from the early 1950s.

In a 2003 Spartanmag print edition story, Newell’s players spoke about a reunion on campus with Newell; Izzo welcomed them to the Breslin Center. Not only that, they felt humbled when Izzo required his players – stars included — to introduce themselves to Newell’s old-timers.

Such a link isn’t taken lightly among former players, according to Krzyzewski’s early players. In an ACC Network documentary, “The Class that Saved Coach K,” Krzyzewski’s players said having their old coach still on campus helps them connect to the program after all these years. Tommy Amaker added they understand it’s not that way at schools with coaching tree limbs sawed off.

Ganakas and Heathcote tied a knot to bind Michigan State together. Izzo has kept that knot firmly tightened, even after the passing of BOTH Heathcote and Ganakas.