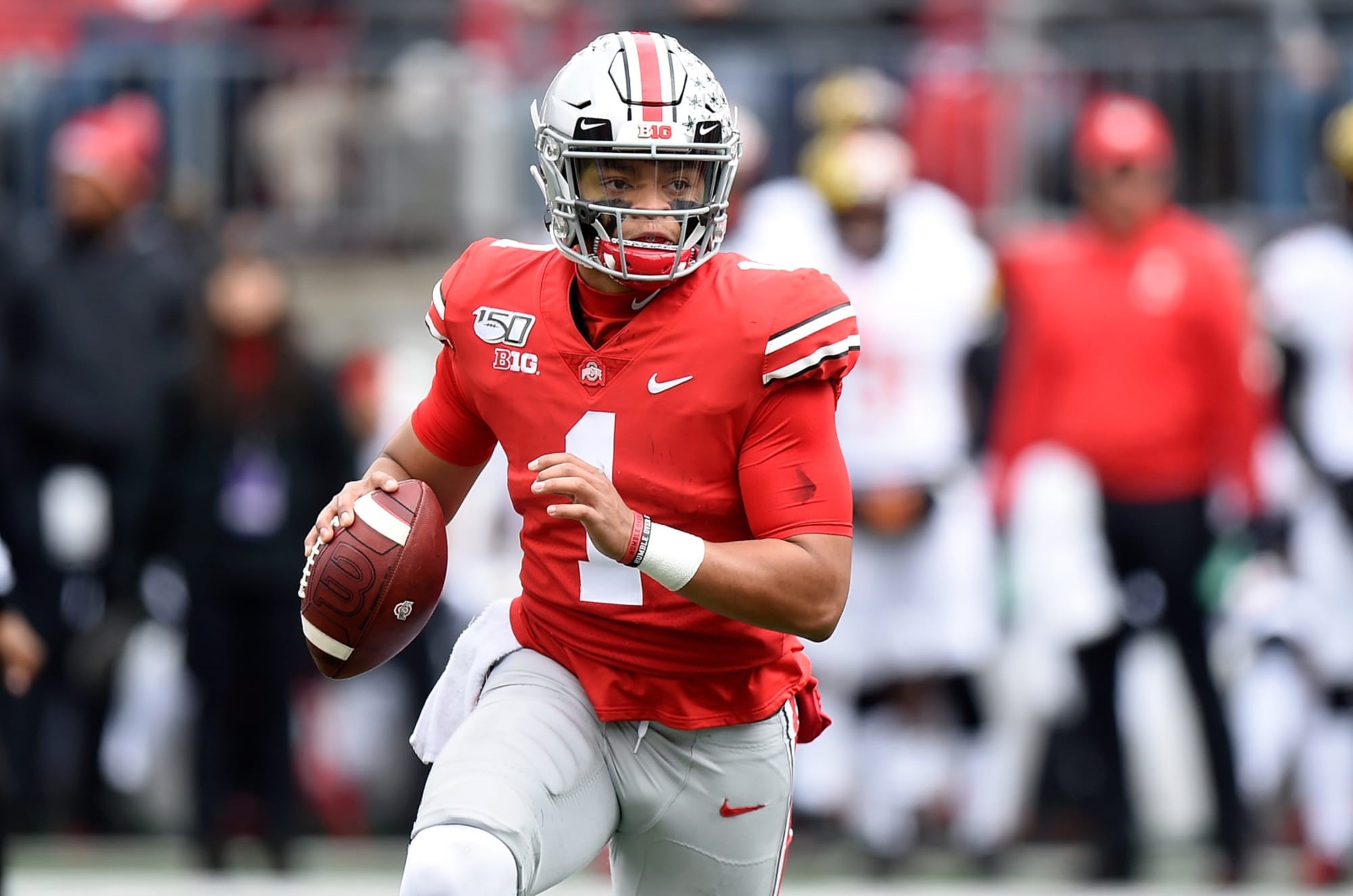 Ohio State entered 2020 as one of two schools out of 127 in the Football Bowl Subdivision with a chance to defeat Alabama’s national all-star team. Two was fewer than three other schools in the College Football Playoff.

The other one with a chance was Clemson, but Alabama doesn’t have to worry about the Tigers after having won three of their five meetings in the first six years of the CFP. Ohio State took care of Clemson in the semis for Alabama. Notre Dame was no match for Alabama.

An unintended consequence of a four-team CFP has been recruits follow each other like lemmings to the same three, four or five schools. The intersection of the Internet, websites ranking top recruits, social media and group texting has led to a misguided belief among kids that there are only three schools that offer them an opportunity for both a national title and NFL career – Alabama with Nick Saban, Ohio State with Ryan Day picking up where Urban Meyer left off and Clemson with Dabo Swinney.

“I could run the same stuff today – the misdirection and options. The wishbone and the spread offense attack the corners and perimeters with the same blocking schemes to outnumber your ass. They only have 11 on defense. You learn to always outnumber their ass.”

But in 2020, only Ohio State of the four CFP teams has a 21st century quarterback – a run-pass-option guy. You know who would have loved coaching Justin Fields with his feet and strong arm?

Yep, that’s right. Not the Barry Switzer that liked to put up “half-a-hundred” on opponents while running over and around them with his wishbone offense — a running quarterback, fullback and two slot backs — in the 1970s and into the 1980s.

I mean today’s Barry Switzer. He’s 83 years old, but he still lives in Norman, loves attending Oklahoma games and watches others on TV. That gets the gears turning in his mind, dreaming up offensive schemes.

“I look at the way they run offenses today, and I’ll tell you something, I’d line up today the same way,” Switzer said. “I’d recruit a (dual-threat) quarterback. I’d run the option without a doubt. The spread offense, by design, is a lot like the wishbone with motion and movement.”

I spoke with Switzer recently for some new research I’m exploring on Michigan State coach Duffy Daugherty leading college football integration. Daugherty’s influence, with the success of his Underground Railroad teams, spread throughout the nation more than any other coach. Switzer agreed with me.

It was created by USC backers, with 1970 USC linebacker John Papadakis driving tales that aggrandized the school’s integration role. He either ignored or was unaware of USC’s track record with only five Black players on its 1962 national championship team and seven on its 1967 national title roster. How was it possible that in a region as populous and diversified as Los Angeles the Trojans had only seven Black players as late as 1967, with the star, O.J. Simpson, recruited from San Francisco City College?

Bryant apologists, most prominently author Keith Dunnavant, were quick to propagate the false narrative as a way to obfuscate Bryant dragging his feet. The fiction poses Bryant as an integration hero. The legendary Alabama coach shouldn’t be celebrated for waiting until 1971 to desegregate his program – eight years after the campus desegregated.

I’ve written this plenty of times, but the mythology has been entrenched the past 30-plus years from national media regurgitating an unvetted story, HBO, Showtime and ESPN trotting out Dunnavant and Papadakis on film to promote their premise and, probably most of all, Bryant hagiography.

While I was watching ESPN’s excellent “Backstory” piece Sunday night on Manti Te’o and catfishing, I thought about how the national media likes to run with regurgitating an untrue story. Hey Don Van Natta Jr., here’s another Backstory idea.

But back to Switzer.

What I learned from interviewing Switzer — who began whipping Texas with Black Texas high school recruits — was that Daugherty and Switzer were closer than has been known or expected. But that’s a story for me to tell another day.

For this interview, Switzer was generous with his time. Barry enjoys telling stories, so eventually we went off on a tangent. He touched on explaining how his 1970s and 1980s wishbone offense could blend with today’s spread offenses.

“I could run the same stuff today – the misdirection and options,” Switzer said. “The wishbone and the spread offense attack the corners and perimeters with the same blocking schemes to outnumber your ass. They only have 11 on defense. You learn to always outnumber their ass.”

When Switzer was winning three national titles (1974, 1975 and 1985), a running quarterback was enough to direct the offense. But with relaxed defensive contact rules and the evolution of seven-on-seven football in the summer, quarterbacks come out of high school more sophisticated.

“You learn to do different things with formations and movement,” he said. “I think I could recruit the same kind of talent and I’d throw the ball. You look at what Lamar Jackson did at Louisville. Hell yeah, he’s my kind of guy.”

Two years later Switzer watched Oklahoma’s version of Jackson. Kyler Murray won the 2018 Heisman and was the first overall pick of the 2019 NFL draft despite standing under 6-foot.

Murray led Oklahoma to the 2018 CFP, losing to Alabama’s national all-star team in the semis. But the Sooners might not have made it to the CFP without Murray. They nearly had their season derailed the fourth week by Army until Murray pulled out a 28-21 overtime victory.

Switzer still laughs at Oklahoma fans he encountered that night and the next few days with hanging heads.

“I said, ‘You watched the game, didn’t you? They had the ball 45 minutes and we had it 15 minutes. That’s what happened. That’s what the wishbone does to you. You better score when you’ve got the ball.”

Murray finished 11-of-15 passing for 165 yards and three touchdowns and ran seven times for 71 yards and one TD. You may initially be unimpressed with the lack of a 300-yard passing game or 100-yard rushing effort, but Sooners only had seven possessions with 47 snaps. They had the ball for only 2:43 in the second quarter and 2:26 the third.

“When we played Army two years ago, I knew what was going to happen,” Switzer said. “The wishbone is hard to play against and Army can execute it. If we didn’t have Kyler Murray that night, we wouldn’t have won the game. And we had to win it overtime.”

“But you have to be at the right school to recruit athletes on both sides of the ball.”

“Where has Mike been coaching?” he said. “You don’t win championships at Washington State and Texas Tech. He’s won at those schools more than anybody else, nine, 10 games, but he can’t get enough players to win championships. He’s attracted quarterbacks and receivers. But you have to be at the right school to recruit athletes on both sides of the ball.”

The four-team CFP has funneled the top talent on both sides of the ball to the same three schools. Alabama’s 2020 starting lineup features eight from Florida, five from Louisiana, two from Georgia and one each from Texas, California, Indiana and Canada.

It was two from Texas before Jaylen Waddle suffered and ankle injury. Waddle’s injury knocked him out of the Heisman Trophy race, but he was replaced by two others named finalists, Heisman winner DeVonta Smith (Louisiana) at wide receiver and Jones (Florida) at quarterback.

Waddle might have been another Heisman finalist until his injury. Smith moved up the ladder with Waddle’s injury. Najee Harris of California arguably could have been a Heisman finalist, but there was no room left at the Downtown Athletic Club Inn. He was among the preseason Heisman favorites — not Waddle and Smith.

What other school has talent so deep it can have a preseason Heisman favorite replaced by two finalists — one the eventual winner?

It’s unclear if anything interrupt the sociological trend, but there is no end in sight.

Penn State, Florida State, Michigan, Nebraska, Texas and USC used to line up enough talent to win national titles. LSU had enough to win it all in 2019, but the Tigers got lucky with the transfer of quarterback Joe Burrow (from Ohio State) and they don’t have back-to-back-to-back-to-back classes stacked upon each other.

As Switzer noted about Army-Oklahoma, the Sooners’ overall talent didn’t matter as much as needing Murray at quarterback to win.

For Ohio State with Fields, the same may true as the only reason the Buckeyes can upset an Alabama roster that includes more Heisman candidates than can fit on a ballot.

The West Point radio show that linked their careers