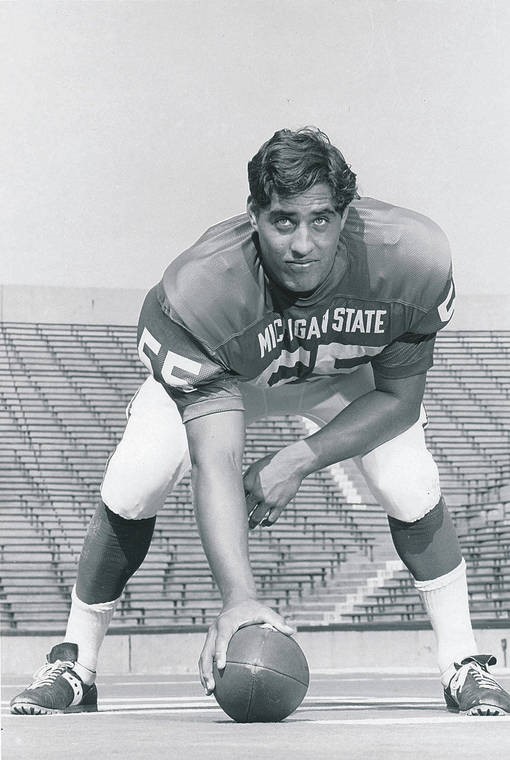 Pride in the number of Hawaiian athletes succeeding on the mainland.

Pang for the absence of Hawaiians playing at Michigan State.

Hawaii and Michigan State are Ane’s football roots, having been recruited out of Honolulu Punahou to play for the Spartans, 1972-74. Michigan State coach Duffy Daugherty’s Hawaiian Pipeline carried him to the East Lansing campus.

Ane was a second-team All-Big Ten center on the 1974 team that upset No. 1-ranked Ohio State 16-13 – one of college football’s monumental upsets — and finished the year ranked No. 12. He went on to a seven-year NFL career, six with the Kansas City Chiefs and one with the Green Bay Packers.

He returned home to Diamondhead’s shadow, coaching a year at the University of Hawaii and eventually as the Punahou head coach, compiling more than 100 career wins while dozens of players earned scholarships from mainland schools. He had played at Punahou for his father, Charley Ane, a NFL Pro Bowler in a seven-year with the Detroit Lions (1953-59). Father and son later coached together at Punahou.

“We have so many great kids coming out of Hawaii now, and they’re looking for places to go past California,” Ane said. “It used to be kids from Hawaii only wanted to go to a West Coast college, but now they want to experience more. They’re not afraid to travel. They welcome the challenge.”

Normally, the upcoming bowl season would have left him plenty of opportunities to watch a cornucopia of Hawaiian players, but, of course, the COVID-19 pandemic has disrupted schedules big and small.

Daugherty’s Hawaii footprint has been another example of how he was ahead of his time. He successfully recruited Polynesian athletes just as he broke ground with his transcendent 1960s Underground Railroad teams that tapped African-American players from the segregated South.

Apisa’s stature as the first Samoan All-American player on the back-to-back 1965 and 1966 national championship teams launched the wave of Polynesian talent that now permeates football at all levels. Knee injuries ended Apisa’s NFL hopes (he was drafted by the Green Bay Packers when Vince Lombardi was the general manager), but he was inducted into the Michigan State Hall of Fame in 2017 and the Polynesian Hall of Fame in 2018.

But other than Daugherty’s Hawaii presence it wasn’t until later into the 1970s and 1980s that college coaches actively recruited Hawaii when the jet age made it easier to travel to the middle of the Pacific Ocean. The College Football Hall of Fame coach began tapping a limited talent pool while it was still a lightly populated U.S. territory prior to gaining statehood in 1959. His advantage was having Tommy Kaulukukui as his eyes and ears, tipping him off to Big Ten-caliber talent.

Daugherty and Kaulukukui, a former University of Hawaii coach, struck up a friendship through two Michigan State-Hawaii games – 1947 in Honolulu, 1948 in East Lansing — when Daugherty was an assistant to head coach Biggie Munn. They remained friends throughout their lives, Daugherty passing away in 1987 at age 72 and Kaulukukui in 2007 at 94.

Ane’s high school coaching career kept him up to date with Hawaii’s top players, those that have played for him and against him.

Another former Ane players from Punahou was DeForest Buckner, who is now with the Indianapolis Colts. Buckner was a 2016 first-round draft pick out of Oregon by the San Francisco 49ers and played for them in Super Bowl LIV.

You can hear the pride in Ane’s voice recalling their names.

The pang takes over when he recalls moments such as sitting down to watch the Nov. 14 Wisconsin-Michigan game. The Big Ten matchup featured a pair of true freshmen Hawaiians recruited from St. Louis. Wisconsin’s Nick Herberg was a 4-star outside linebacker that finished the season fourth in tackles and Michigan’s Roman Wilson a 3-star wide receiver who ended the season fourth in receptions. Michigan coach Jim Harbaugh had also recruited Herberg, although had to “settle” for Wilson.

Ane has enjoyed traveling to the mainland to see some of his former players at their new campuses and has targeted a future Army-Navy Game with Maretzki. But he hasn’t had the opportunity return to East Lansing to see a former player at Spartan Stadium.

When he says “we,” he means a couple of groups.

One forms the aforementioned 10 Hawaiians playing for Daugherty plus an 11th member, Carter Kamana (1981-84), who was recruited by Muddy Waters out of Honolulu Kamehameha. Waters’ attempt to re-tap the pipeline ended when he was fired after only three seasons, 1980-83.

Kamana, similar to Ane, has encouraged the Spartans’ coaches to use their Hawaii contacts. He saw his son Tim Kamana play at Spartan Stadium in 2014, but Tim was a Wyoming safety in game that Michigan State won. His daughter Lia is a Michigan State graduate and TV reporter at NBC 25/Fox 66 in Flint, Michigan.

Of Daugherty’s successors, the Hawaiian Pipeline foothold prior to Hawaii’s growing population growth was squandered by all but Waters.

Denny Stolz (1973-75) succeeded Daugherty and one of his first moves was telling Morgado, a backup running back in 1972, he was being switched to linebacker. Stolz, with no plans to recruit Hawaii, wasn’t worried about alienating Hawaii’s high school coaches over switching Morgado’s position – always a concern for college coaches recruiting a region — over the decision.

Morgado instead transferred home, finished his career as a running back at Hawaii, setting himself up for a four-year NFL career with the Kansas City Chiefs. Upon retirement, Morgado has served on the Honolulu City Council and in the Hawaii House of Representatives. He has continued to express his respect for Daugherty and Michigan State.

Darryl Rogers (1976-79) — the coach between Stolz and Walters — came from San Jose State and recruited Californians but not Hawaii. Perles, despite his Michigan State history and professed closeness to Daugherty, failed to continuing re-tapping Daugherty’s Hawaiian Pipeline upon succeeding Waters.

Imagine if at the end of segregation — coaches such as Alabama’s Bear Bryant waited until 1971 to desegregate his football team and Texas’ Darrell Royal until 1970 — Michigan State had abandoned recruiting the South based on its Underground Railroad foothold.

Even Alabama, capitalizing on its national titles and social media communication trends to recruit essentially 25 first-round draft picks in every recruiting class, seeks Hawaii talent. Once Tagovailoa committed to Alabama, his family uprooted from paradise to live near the Tuscaloosa campus in Alabaster, Alabama.

The Spartans had contacted Te’o, but Dantonio’s staff was too late in the process for Te’o as a highly recruited high school All-American player with plenty of offers he was narrowing down to Notre Dame and USC.

However, Dantonio did sign Jacob Isaia, Apisa’s grandson, in his 2018 class. Isaia played his sophomore year in Hawaii at Iolani before he competed as a junior and senior at Las Vegas Bishop Gorman.

Although Hawaii didn’t have a high school football season last fall due to the COVID-19 pandemic, Punahou is still sending players to the mainland, including Midwest campuses.

Punahou 3-star linebacker Kahanu Kia signed on Dec. 16 with Notre Dame’s Class of 2021. In the 2022 class, Punahou junior linebacker Teva Tafiti, a 4-star defensive end, has offers from Notre Dame, Wisconsin, Michigan, Nebraska, Syracuse and Virginia in addition to 11 of the Pac-12 schools. Rivals.com ranks Notre Dame as the favorite for Tafiti’s commitment.

Michigan State coach Mel Tucker was still at Colorado when he offered Kia, having sent a position coach to Hawaii to scout players. Tucker, who just finished his first year in East Lansing, didn’t take the Michigan State job until after the 2020 recruiting class had been put together and signed under Dantonio.

“Now that we (the Spartans) have a new coach, I’m hoping we hear from him,” Ane said. “Coach Tucker sent one of his (Colorado) position coaches out here to look at our players. Hopefully they keep coming out.”

Ane’s second “we” group are Hawaiians that became Michigan State fans through Daugherty’s Hawaiian Pipeline, particularly the 1966 season. Apisa, a junior that season, was one of three Hawaiians along with Kenney, a senior bare-footed place-kicker, and Wedemeyer, sophomore backup quarterback who also served as Kenney’s holder.

The trio combined for a storied headline in the Honolulu Star-Bulletin after the Spartans beat Ohio State 11-8 on Oct. 15, 1966 at Ohio Stadium. They accounted for all of Michigan State’s points in the comeback victory played in a torrential downpour with rain blowing sideways.

Kenney hit a field goal for a 3-0 lead, Apisa added six with a fourth-quarter touchdown to take a 9-8 lead and Wedemeyer caught a two-point conversion pass from Kenney for the final score.

Apisa received a phone call from Hawaii the next day, waking him up, telling him about the headline resonating throughout the Islands. At the time, Hawaii’s program hadn’t been elevated to Division I until 1974 – just in time for Morgado’s homecoming.

It was actually the second straight year for Daugherty’s Hawaiians scored all the points, although Wedemeyer was on the 1965 freshman team in the NCAA era prior to freshman eligibility. The Spartans opened 1965 with a 13-3 win over UCLA. Apisa scored six on a touchdown and Kenney seven with two field goals and an extra-point. A Hawaiians 13, UCLA 3 headline would have been accurate, but it was overlooked .Wedemeyer’s two-point conversion in 1966 made the feat stand out.

But that’s not all.

The Ohio State victory continued Michigan State’s unbeaten march to the Game of the Century that matched No. 1-ranked Notre Dame against No. 2 Michigan State on Nov. 19, 1966 at Spartan Stadium. Thanks to interest in the game – a record 33 million people watched on TV – and emerging space-age satellite technology, the Game of the Century marked the first live broadcast of a football game in Hawaii.

Ane was 13 when he watched the game, making up his mind he wanted to play for one of the two schools.

He and his fellow MSU Hawaiians are decades removed from their college days and in the middle of the Pacific Ocean 4,402 miles from East Lansing, but Michigan State still fills their hearts. It’s the same with Kaulukukui’s son, Tom Jr. He didn’t play for the Spartans, but he attended Michigan State along with Kenney, his long-time friend.

The Hawaiian Pipeline Spartans are poised as a modern-day Tommy Kaulukukui, Daugherty’s eyes and ears in paradise.

This story includes research from Raye of Light, which includes Chapter 13 on Bob Apisa, First Samoan All-American, and Chapter 14, The Hawaiian Pipeline.

It’s time for Tiger Woods to fade away