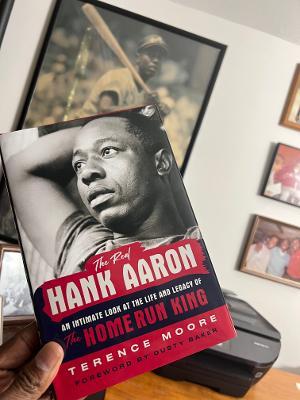 The End Game discusses race and sports in America with a focus on Michigan State coach Duffy’s Daugherty’s 1960 teams leading college football integration. Duffy’s teams were the sport’s first fully integrated rosters and won national titles in 1965 and 1966. Don’t believe the myths and fiction surrounding the 1970 USC-Alabama game that aggrandized USC’s role and obfuscated Alabama coach Bear Bryant dragging his feet into the 1970s. The information is taken from “Raye of Light” and my upcoming book, “The Right Thing to Do.”

Co-hosts: Tom Shanahan is an award-winning sportswriter. Herman Bulls is a West Point graduate, retired U.S. Army Colonel and vice chairman at JLL, an international firm. He has been honored several times as one of top African American executives.

nthony and I discuss with Terence his new book on Hank Aaron based on their long relationship. Aaron trusted Moore with his thoughts on many subjects, including the lack of Black baseball players, executives and managers. We also discussed race in sports regarding Jackie Robinson as a Civil Rights leader and the reluctance of Black stars such as Willie Mays, Ernie Banks, Tiger Woods and Michael Jordan to take stances on race. Terence also explains Aaron’s feelings on Barry Bonds and the all-time home run record (we agree the real record is Aaron’s at 755). Bonds’ pursuit of Aaron’s record brought back to Aaron painful memories from death threats associated with his pursuit of Babe Ruth’s record. Naturally, I bring the subject back to Michigan State’s leadership of college football integration at the end of the discussion. I make the correlation between the public failing to understand unwritten quotas in college football through the 1960s and the declining number of Black prospects in baseball.