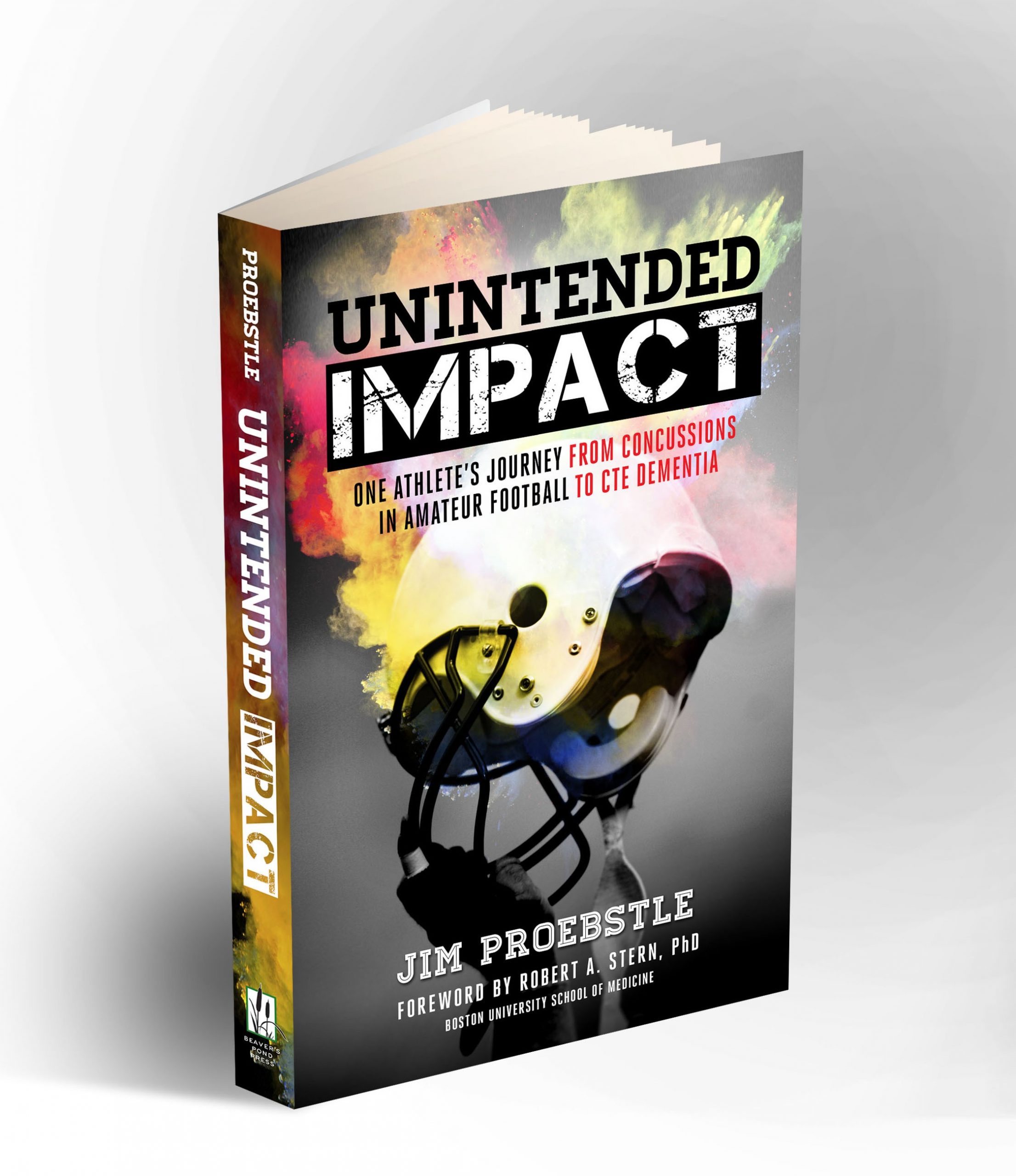 I’ve transferred this story from my former website that was originally on May 26, 2015.

CTE joined the NFL alphabet largely through the deaths of football legends Mike Webster, Dave Duerson and Junior Seau and a $765 million lawsuit by former players, but fans still possess only limited awareness of concussions.

They can gain much more knowledge about Chronic Traumatic Encephalopathy, the degeneration of the brain from too many blows to the head, through a name fans won’t recognize – Dick Proebstle, a Michigan State quarterback that earned All-Big Ten honorable mention in 1963.

His story is told as a family creative non-fiction memoir, “Unintended Impact,” by his younger brother, Jim, a teammate at both Canton (Ohio) Central Catholic High and Michigan State. Jim, a tight end on Michigan State’s 1965 national championship team, had published two award-winning novels before he tried his non-fiction journey to explain the toll of CTE on the victim and his family.

“Unintended Impact” is uniquely enlightening with its beginning-to-end view of the descent into dementia. Jim Proebstle (pronounced Probe-stull) witnessed the concussions as a teammate and saw the long-term effects as a brother. The book is a bigger window than past articles on famous athletes that focused on the end of their life. The book’s subhead: “One Athlete’s Journey from Concussions in Amateur Football to CTE Dementia.”

It is gut-wrenching to read Dick’s change in personality, his outbursts, his paranoia and his failed physical abilities. CTE, you learn, is about more than memory loss. The family was anguished and frustrated by the developing odd behavior of a life-long achiever. Dick went through a divorce. Dick’s son and daughter relied heavily on Uncle Jim and Aunt Carole to cope with their father.

As the story unfolds and Dick is diagnosed, the reader exhales along with Jim. Now I understand.

Researchers at the Boston University Disease and CTE Center have pioneered the study of CTE, but why some athletes such as Dick suffer severe consequences from concussions and others don’t is still being studied. To assist the research at the BU CTE Center, the family donated Dick’s brain. Jim’s family memoir has the backing of the center’s director, Robert Stern, Ph.d. He wrote the Foreword for the book.

Jim, while gaining CTE knowledge, worked backward, piecing together Dick’s multiple concussions. He connects a devastating blow as a college junior that Dick suffered on a sack in practice to a hard hit in high school that Dick inflicted as a senior linebacker on a fourth-down, goal-line tackle.

The college sack sent Dick to the campus Olin Health Center and ultimately ended his once-promising career. The high school tackle was dismissed as having his “bell rung.” That’s the way it was in those days. As Central Catholic’s quarterback, though, he stayed in the game on wobbly legs. He called the only play he could remember, a quarterback keeper, four straight times.

When I researched and wrote Raye of Light,” a book with Jimmy Raye on Michigan State and head coach Duffy Daugherty’s leading role in the integration of college football, I was surprised to learn Dick’s career ended before his senior year due to multiple concussions.

Surprised only because I didn’t think football acknowledged the dangers back then. That was in 1964, the year Dick was invited to continue with the program as a freshman coach. He tutored Raye, the South’s first black quarterback to win the national title in 1966, on what Raye said were invaluable nuances of playing quarterback in the Michigan State system.

Jim also thanks the Olin Health Center for opening its records to him on Dick. He describes how Dr. James S. Feurig ruled Dick shouldn’t play football anymore and Daugherty accepted the diagnosis without pressure to clear Dick. They were ahead of their time.

Jim’s book isn’t about condemning the sport he loved as an athlete and still loves as a fan. His final chapter is about the safety road the sport must continue to travel for future athletes.

“Not being involved in football, with the terrific coaches I had, would have robbed me of the lessons I learned in my development as a young man,” Jim concludes.

Click on the link for Jim Proebstle’s interview with Jack Ebling on The Drive with Jack. The segment with Proebstle begins at 53 minutes.