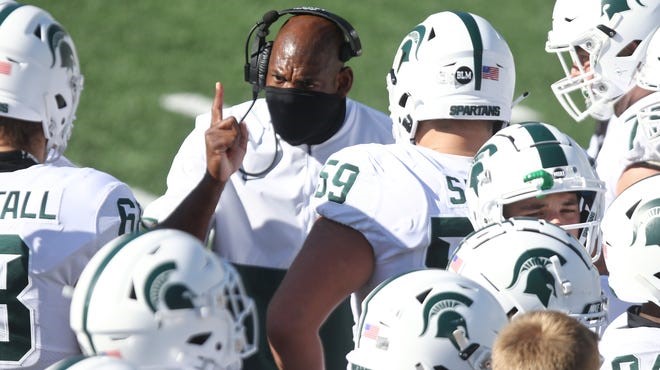 Barry Alvarez likes to keep up on former players and coaches, especially ones that graduate to head coach. Sometimes they come to him.

Long was Iowa’s quarterback when Alvarez was a Hawkeyes assistant under Hayden Fry. Alvarez was Wisconsin’s head coach (1995-2005) with Bielema his defensive coordinator in 2004 and 2005. When Alvarez retired from coaching while retaining his role as athletic director, Bielema was promoted.

That allowed for a special pre-game moment among the trio before kickoff at Camp Randall Stadium.

But in 2020, Michigan State and Wisconsin didn’t play. So, Alvarez had to settle for watching on TV former Wisconsin player Mel Tucker as the Spartans’ new head coach.

“I thought Mel got the most out of his kids this year,” Alvarez said. “I really did. I had a chance to watch several games, and I thought his kids were well coached. He’s still getting them into his system and his teaching. I think he maximized his personnel this year.”

I had a chance to speak with Alvarez the other day for some new research I’m digging into on Michigan State’s College Football Hall of Fame coach, Duffy Daugherty, whose 1960s Underground Railroad teams led college football integration.

Tucker’s first season finished with only a 2-5 record, but there were performances to build around. The Spartans won 27-24 at Michigan and 29-20 over then-No. 8 ranked Northwestern, the Big Ten West champion, at Spartan Stadium.

Tucker was a late hire in February. That prevented getting to know his players during winter off-season workouts. Then spring football was canceled due to the COVID-19 pandemic. Once the abbreviated season was finally set by the Big Ten Conference office, there was little time to fully prepare for games.

Alvarez expects Tucker’s diligence to reveal itself in the future, although the pandemic limitations continue for now.

“Mel was always a student of the game,” Alvarez. “He was very intense, but Mel was a people person. He got along with everyone.”

Tucker’s first season also revealed to him he has to remake the Spartans’ roster through recruiting. Michigan State’s talent level had been dropping in recent years in rankings posted by recruiting websites within the Big Ten as well as nationally.

When Alvarez arrived at Wisconsin in 1990, he took over a program that was 6-27 the previous three seasons under Don Morton. The Badgers were without winning record since 7-4-1 in 1984.

The 1991 season began with three non-conference victories, but the Badgers dropped their first six Big Ten games. On Nov. 16 at Minnesota, though, Tucker helped clinched a 19-16 victory. The triumph stands as Alvarez’ first Big Ten win and first conference victory on the road.

“That victory was iced by Mel Tucker,” Alvarez said. “He made a big hit on the last play of the game in the end zone to knock the ball free from the Minnesota tight end to preserve our victory.”

Alvarez is now a College Football Hall of Famer – and 2009 recipient of the Duffy Daugherty Memorial Award – but on Nov. 16, 1991 he was still a first-time head coach struggling through his second season.