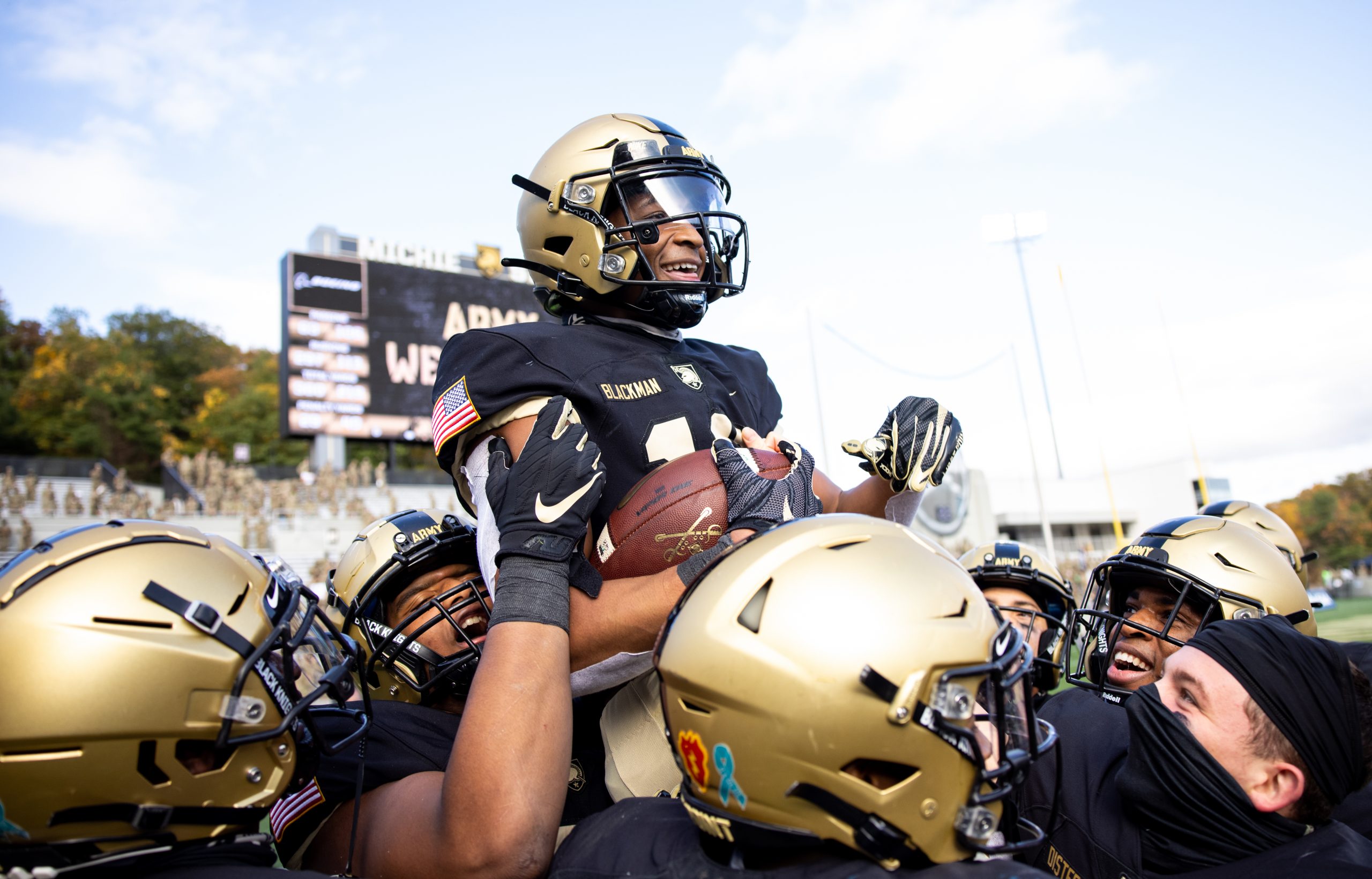 Jordan Blackman #10 of the Army Black Knights celebrates after rushing for a touchdown during a game against the Mercer Bears at Michie Stadium on October 24, 2020 in West Point, NY.

The scene unfolding as West Point’s Jordan Blackman was engulfed by teammates was something out of a Hollywood movie.

The senior had scored his first career touchdown in last week’s 49-3 win over Mercer at Michie Stadium. Moments earlier, his first career carry was a 13-yard run. On third-and-goal from the 6, he plowed his way over the left front pylon. A Mercy tackler, careening backward, must have asked for mercy from the 5-foot-11, 190-pounder upon contact.

Blackman climbed to his feet, acting like he had been their before with the poise of a future Army officer. It was his teammates that couldn’t control their emotions, a mix running from the field or sideline to the end zone.

“I don’t know what it was … just instinct is what it was,” said J.B Hunter, a senior starting offensive tackle who entered West Point in the same senior class. “I had to run over there. There were literally 50 of us celebrating all his hard work.

“He is one of — if not the — hardest working person I’ve ever met. He hasn’t had the role he wanted to fill on this team, so for him to get the opportunity and take advantage of it was breathtaking. I almost shed a tear to see how happy he was.”

To be considered the hardest worker at West Point — a bastion of leadership — that’s attaining the ultimate rank.

But his teammates weren’t finished recognizing the moment with pats to the helmet and slaps to the shoulder pads. They hoisted him on their shoulders for a ride back to the sidelines.

“It was an amazing feeling,” Blackman said.

The celebration ended only because Blackman had to take the field for his regular role on special teams, kickoff coverage. When he returned to the sidelines, the slot backs got down on their knees and bowed to “The King,” their position group’s customary way to honor a big play.

All of it is a true story. The uncommon moment’s only irony was Blackman’s touchdown came on a routine Army triple-option drive: 17 plays, 91 yards, 10:03 time of possession.

But Hollywood executives would have sent the script back to rewrite. Where’s the off-field drama? The conflict? The bitterness? Where’s the sex?

“Rudy,” the popular 1993 football movie, needed fiction to get produced into a moneymaker. The reality is, Notre Dame’s players never turned in their uniforms to coach Dan Devine, threatening not to play if Rudy Ruettiger wasn’t given a chance to dress for the season’s final home game. Writers made up that scene.

And Notre Dame legendary quarterback Joe Montana, in a “Dan Patrick Show” interview years later, said, yeah, some players carried Ruettiger, but it was a joke. It wasn’t a grand denouement. It’s a comment that also offers insight into the deep team bond cultivated at Army compared to civilian college teammates.

Best-selling author John Feinstein got the Blackman celebration right in “Feinstein Findings,” his weekly story for Goarmwestpoint.com. Noting some teammates chanted “Rudy,” he wrote it was unfair to Blackman to compare his Army moment to a movie with a Hollywood ending.

Once again, truth proves itself to be stranger than fiction.

Blackman was a high school running back and cornerback at St. Genevieve in California’s San Fernando Valley. He was like most high school stars that dreamed about playing Division I college football, maybe even the NFL.

Hs talent earned scholarship offers from the Ivy League’s Columbia and the University of San Diego, a Football Championship Subdivision member. He had a preferred walk-on invitation from Oregon.

But having played his senior year as a 16-year-old, he was a year behind his classmates in physical maturity, although certainly not intellectually and emotionally. He was St. Genevieve’s senior class president and valedictorian with a 4.8 grade-point average.

With that resume, West Point was his least likely destination. The service academies that play Division I football, Army, Navy and Air Force, don’t redshirt athletes. Prospects are admitted with the aim to train a future officer in four years.

Some players attended their respective academies’ prep school to improve their academics for admission, which essentially amounts to a redshirt season. But class valedictorians don’t need a prep school.

With his academic record, he might earn his Ph.D by 2022.

Blackman understood his options were less demanding elsewhere, but he nevertheless chose West Point. Army assistant coach Sean Saturnio laid out what a West Point degree offers whether he stayed in the Army beyond his five-year military or not.

“Coach Saturnio was the most consistent during recruiting,” Blackman said. “He showed the most interest in me.”

Blackman saw it as his best combination of Division I football and academics despite having to report to Beast Barracks, West Point’s boot camp, as a 17-year-old. His mother had to sign a waiver for him to leave home that young.

“Honestly, I felt it was the opportunities this institution presented me after football,” Blackman said. “Every kid’s dream is to play in the NFL, but I feel the impact you make as a leader in this world extends far beyond the football field. And this is the one place where my leadership will be developed to that level.”

Blackman hasn’t waited until graduation to give back. While he was home on leave last winter, before the COVID-19 pandemic shutdown, Blackman and fellow Cadet Nick Ghazarian of Encino Crespi led a workshop for middle school students on leadership and ethics at Stephen M. White Middle School in Carson.

Blackman didn’t play his first two Army seasons, 2017 and 2018. Last year he got on the field against Massachusetts, but he also missed games with a knee injury.

A typical college football player, especially in this era of the NCAA transfer portal, would have been looking around after the first two years; Blackman was still free to leave West Point without a commitment to the military until returning as a junior.

“For me personally, it’s just realizing if you really love something that you’re passionate about, you don’t just love it when everything is working in your favor. If you love it, you face adversity and still have the willingness to push through it.

“Ever since I was a kid, I had aspirations to play football at this level. It’s not easy because everyone that came here was a star at their high school. But it’s important to remember football is a team game. It has contributed to our success here. I think you learn here more than anything, it’s not about one person. One person alone can’t make Army a successful program.”

The words might sound scripted at many schools, but at West Point, the football players trained with the rest of the Corps of Cadets. There is no fooling them.

“He carries himself really well whether he is in uniform or not,” Hunter said. “There is something about him — you respect the man. Everything he does, he’s always holding himself to the highest standard. Everyone on this team has great respect for him and would die for him, honestly.”

That might sound melodramatic. But that’s what they do at West Point – train side by side for a career defending their country.

Army is off this week, having improved to 6-1 and returned to the USA Today (coaches) poll at No. 25 with the Mercer win. The Black Knights are among others in the AP (writers) poll with 30 points equal to No. 30.

The sixth win also clinched the Black Knights’ automatic bid to the Radiance Independence Bowl in Shreveport, Louisiana. The time and date are to be announced.

Army returns to the field Nov. 7 when it hosts Air Force in the second leg of the Commander-in-Chief’s Trophy round robin series. The Falcons have already defeated Navy and can clinch the annual service academy award for the first time since 2016.

Air Force plays home-and-home games with Army and Navy. With Air Force scheduled to play at West Point this year, the Black Knights are in the unique position of hosting both service academy games.

The Army-Navy Game annually played at a neutral site was moved to West Point’s Michie Stadium due to the COVID-19 pandemic. It’s the first time, due to World War II, the game has been played on academy ground since 1942 at Annapolis and 1943 at West Point.

“Michie Stadium is a historic collegiate stadium,” Blackman said. “Fortunately for us, that gives us another chance top play in front of the Corps of Cadets and feel at home. We take pride in defending our home stadium.

“That’s a blessing in my senior year that we get to perform in front of our classmates and everyone in the stadium. We’ve had many experiences and it’s where our journey started. Our first game my freshman year was a night game against Fordham. To have one our final games at Michie, it sends us out where it started. It’s a nice story.”

“Spirit in the House, Alan Haller!”