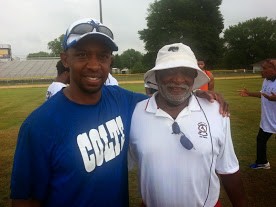 Note: I’m re-posting this story from June 30, 2014 on how then-Indianapolis Colts offensive coordinator Pep Hamilton received his start in coaching through meeting Jimmy Raye. The Michigan State Hall of Famer mentored many young coaches in 36 NFL seasons. He remains a NFL Senior Adviser.

Then-Indianapolis Colts offensive coordinator Pep Hamilton, a Howard University alum who was back in his home state, was among the volunteers invited by Raye, a pioneer among NFL Black coaches and the father of Colts vice-president of football operations Jimmy Raye III.

The rain didn’t deter Hamilton’s enthusiasm or authoritative coaching voice. When the kids heard Hamilton is the man who instructs Colts’ quarterback Andrew Luck, he held their attention. He demanded hustle on one drill and five pushups for everyone on another when one youth jumped offsides.

For Hamilton, working Raye’s camp was one of those life-as-full-circle moments. Hamilton was a quarterback at West Charlotte High when he first learned Raye’s place in history. Years later Raye met Hamilton, and the mentor to many young Black coaches over the years, including a young Tony Dungy, helped open an NFL coaching door to Hamilton.

“If you played quarterback in this state, at some point you learned about Jimmy Raye,” Hamilton said. “It means a lot to me to come back to my homeland, so to speak, and be a part of this event.”

North Carolinians know Raye as a pioneer black quarterback at Michigan State in the mid-1960s on Duffy Daugherty’s famed Underground Railroad teams that won national titles in 1965 (UPI) and 1966 (National Football Foundation/MacArthur Bowl) with players such as College Football Hall-of-Famers Bubba Smith, George Webster and Gene Washington recruited from the then-segregated South. The NFF has recognized Raye as the first Black quarterback from the South to win a national title.

Raye, who recently accepted a position as a senior advisor to NFL vice president football operations Troy Vincent, began his coaching career at Michigan State. He followed it with 36 seasons in the NFL. He was one of the first NFL Black offensive coordinators with the Los Angeles Rams in 1983.

Hamilton was Howard University’s offensive coordinator and quarterbacks coach when he met Raye in 1999. Raye was a Kansas City Chiefs assistant coach who visited Howard to scout quarterback Ted White.

“I sat in on a couple of offensive meetings and watched them work on the field,” Raye said. “I thought (Hamilton) had a future in coaching and needed an opportunity.”

Raye arranged for Hamilton to work for the Chiefs as an intern in the 2000 off-season preparations before he returned to Howard. Hamilton accepted similar roles with the Washington Redskins in 2001 and Baltimore Ravens in 2002. By 2003, his NFL career was launched as a quality control coach with the New York Jets.

“He’s the reason I was able to get to this level of coaching,” said Hamilton, who begins his second season as the Colts’ OC in 2014. “I’m very grateful; I consider him a role model.”

The opportunity Raye provided Hamilton was similar to the door that suddenly opened for him in 1977 with the San Francisco 49ers. At the time, there were only three other black assistant coaches in the league.

Raye was about to coach his first season at Texas under Fred Akers when he spoke at a clinic in San Antonio in the spring of 1977. Then-Los Angeles Rams head coach Chuck Knox also was to speak, but he had to cancel. He sent his offensive coordinator, Ken Meyer.

Meyer was impressed by Raye’s talk. When he soon afterward was named the 49ers’ new head coach for the 1977 season, he invited Raye to join his staff.

“I’ve always said I was lucky Chuck Knox didn’t make that clinic and Ken Meyer stuck around to hear me talk,” Raye said with a chuckle. “I’m still in the National Football League 36 years later.”

One of Raye’s roles as an NFL senior advisor, is to assist opportunities for minority coaches.

“It’s very gratifying for me to see some of the younger guys take advantage of opportunities without some of the anxiety and turmoil that existed when I came along,” Raye said. “We’re all better off for it now. I expect in the near future Pep will be a head coach in the National Football League.”

Hamilton, who turns 40 in September, said he is grateful for the paths cleared by pioneer black coaches such as Raye, Tony Dungy, Art Shell, Dennis Green and another North Carolinian he mentioned, Tyrone Willingham of Jacksonville, N.C. Raye convinced Duffy Daugherty to take Willingham as a walk-on in Daugherty’s recruiting before retirement, 1972.

“I’ve reaped the benefits of guys like Jimmy Raye and Tyrone Willingham and other guys who came before me,” he said. “I feel like the game of football is the greatest meritocracy in our society. The sport has been great to me and my family, and Jimmy Raye helped paved the way.”

Brice puts up some numbers in scrimmage