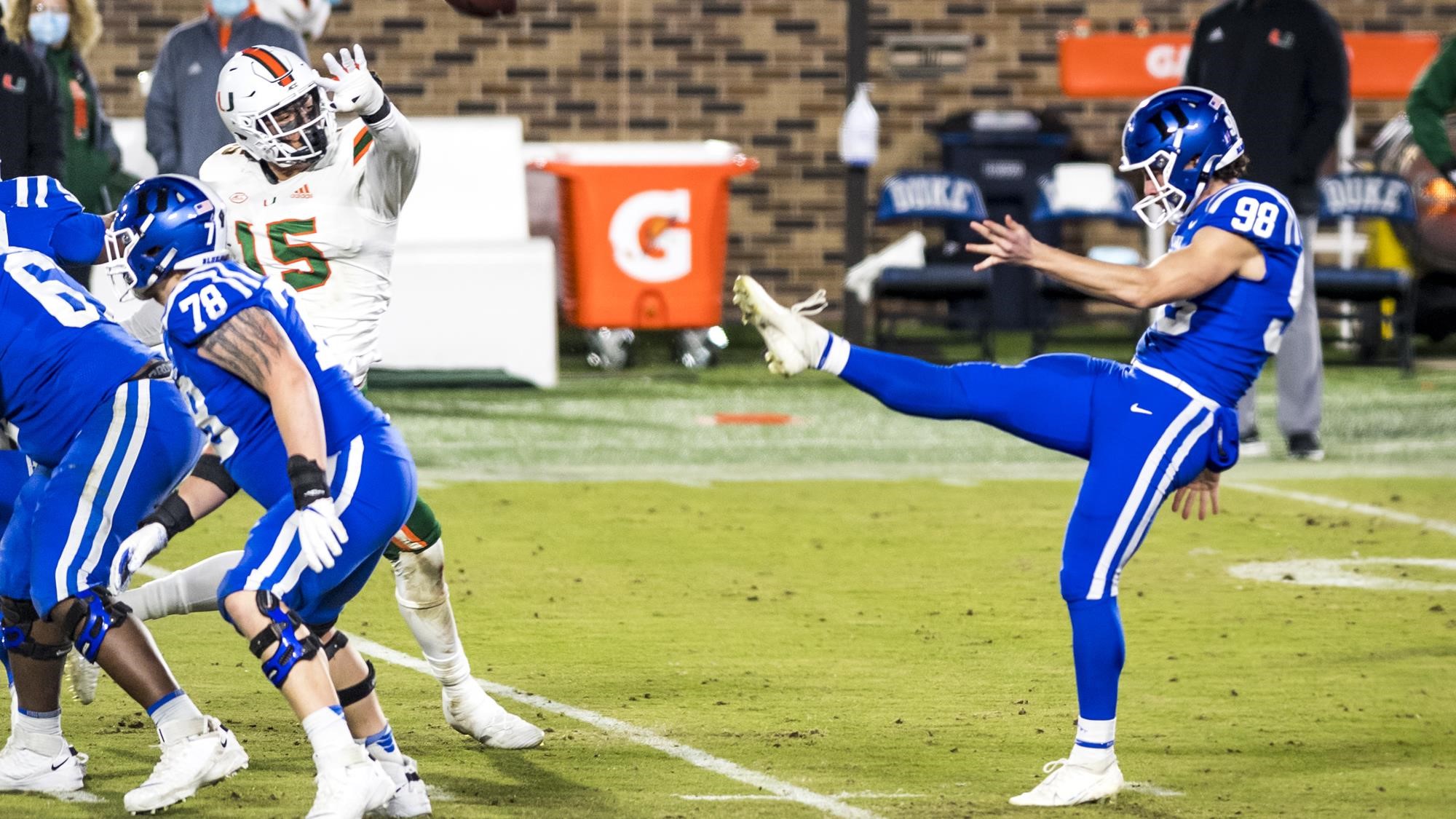 PHOTO (Duke Athletics): Porter Wilson has been one of Duke’s few bright spots, averaging 44.6 yards per punt with six downed inside the 20-yard line against Miami.

Basketball long ago crept into into football season, but the COVID-19 pandemic has exacerbated the overlap. Even though basketball started nearly a month later in late November, football has extended into mid-December.

Some schools – especially those with strong hoop programs – that are suffering through a disappointing football season are ready to move on to the winter sport. Duke is one of those schools.

Duke, of course, is a basketball school. The Blue Devils (2-1) are again a national title contender that opened its season ranked No. 6 in the nation before falling to No. 8 Michigan State last week.

Next up for Duke hoop is the ACC/Big Ten Challenge against preseason No. 5 Illinois at 9:30 p.m. Saturday at Cameron Indoor Stadium.

The Blue Devils had their second game in its first four postponed when a COVID-19 outbreak at Elon called off Sunday’s scheduled contest at Cameron Indoor Stadium. Although Duke coach Mike Krzyzewski would have preferred game experience, the extra practice was something needed to prepare are young roster still seeking its identity.

Sophomore Matthew Hurt had put together back-to-back 20-point games in the loss to Michigan State and Friday’s 76-54 win over Bellarmine, but other freshmen, D.J. Steward, Jeremy Roach and Jalen Johnson, have turned in mixed results.

Another freshman taking advantage of opportunities the last two games has been Jaemyn Brakefield, a 6-foot-8, 216-pounder from Jackson, Mississippi After playing only four minutes with one point in the opening-night win over Coppin State, he scored 11 points in 15 minutes against Michigan State 16 points with n six rebounds in 16 minutes against Bellarmine.

“It’s all starts with preparation,” Brakefield said. “We prepared, and obviously we watched film the last two games, so we prepared not to make the same mistakes. We just came out hungrier. As soon as we finished the game against Michigan State, we didn’t want that to happen again.”

Duke needs to win its final game Saturday at Florida State to avoid head coach David Cutcliffe’s worst record in his 13 seasons of rebuilding the program from double-digit loss seasons to six bowl games in seven years, 2012 to 2018.

The Miami shutout was Duke’s first since under Cutcliffe since Oct. 4, 2008 against Georgia Tech.

The pass protection hasn’t been strong enough and falling behind has contributed to failing to establish a running game. Duke was outgained by Miami, 524 to 177. For the year, Duke has turned over the ball 35 times (19 fumbles 16 interceptions).

“It’s not something you don’t work on,” Cutcliffe said. “We work constantly on protecting the ball mentality. It’s not an anti-turnover thing. It’s a protect the ball mentality. And obviously 2020 has been unique and different. It’s hard to stop the bleeding sometimes. You don’t know if it’s in their head, but every drill, everything we do is about taking care of the ball.”