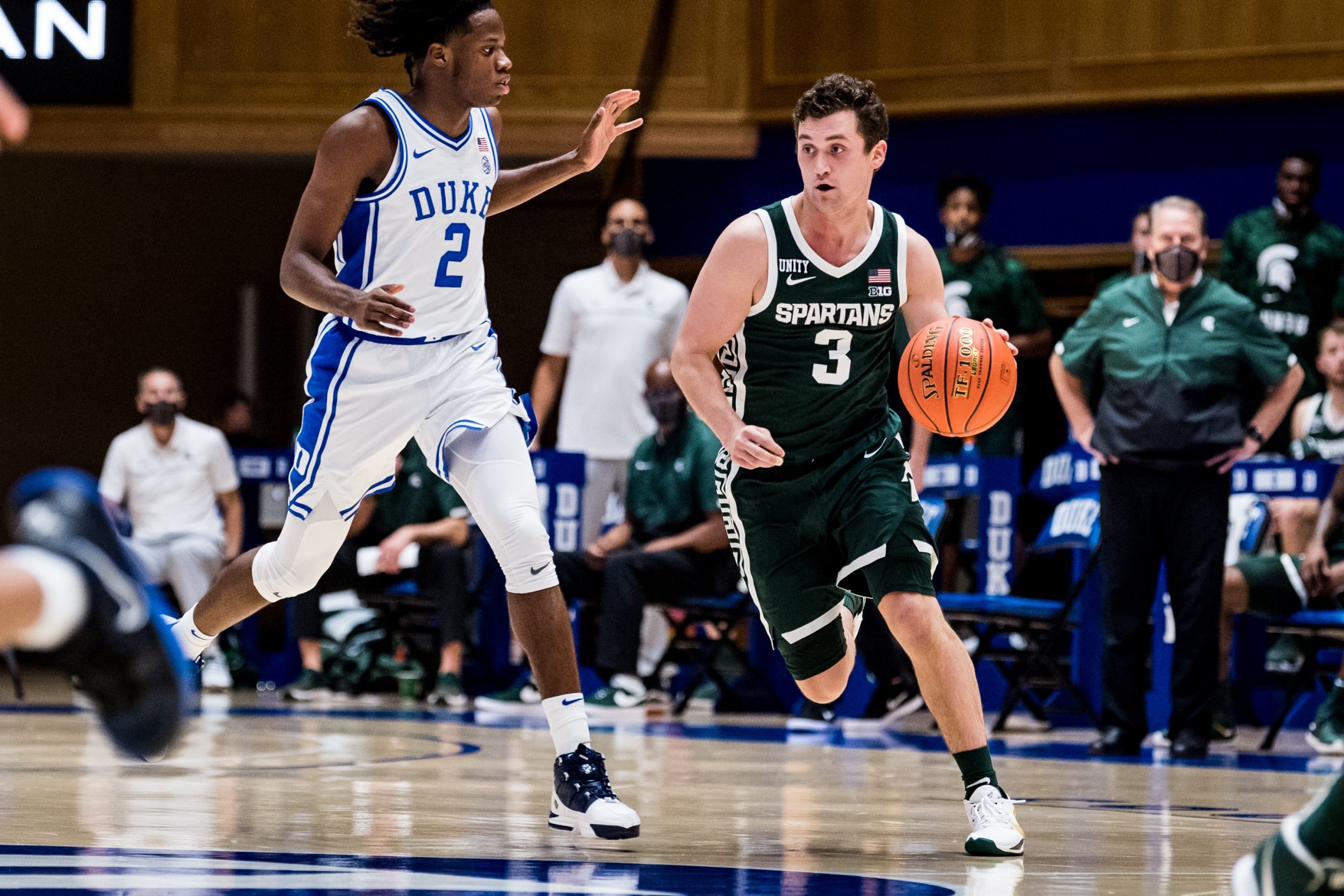 One is protective, a defiant tone responding to anyone questioning why a player isn’t receiving more playing time or used in a different role. He may not explain the deficiencies he sees in said player, but doubting that he’s doing what’s best for the team or the player draws his wrath.

His other ire-with-the media voice defends a player from what he believes has been unfair criticism. On Tuesday night at Duke, Foster Loyer graduated to the latter.

The junior guard matriculated as he figuratively walked across the stage at Cameron Indoor Stadium, helping the No. 8-ranked Spartans (3-0) overcome a slow start to win 75-69 against No. 6 Duke (1-1) in the Champions Classic.

Rocket Watts scored 20 points and Aaron Henry added 14 along with tough defense to draw Izzo’s praise, but the coach quickly shifted gears. His words addressed those that have critiqued the 6-foot, 175-pound Loyer as too small and too slow to defend or score against major college Division I athletes.

“We had some other heroes, too,” Izzo volunteered emphatically in the post-game media session. “Foster Loyer taking three charges and gets five rebounds.”

Michigan State was suffering a slow start that has plagued the Spartans in past losses to Duke. The Blue Devils were attacking the basket successfully as Michigan State fell behind as well as into foul trouble.

Duke led 11-3 when Loyer entered the game off the bench after a media timeout with 15:42 remaining in the first half. ESPN came back from the commercial break with commentator Jay Bilas saying, “I’m actually surprised a young (Duke) team came out with more fight than Michigan State. That’s been the difference in the first four minutes of the game. Duke has knocked Michigan State back with its defense and rebounding and they’ve been taking the ball to the basket.”

Duke took a 13-3 lead and then Jeremy Roach rebounded Gabe Brown’s missed three-pointer. But before the Blue Devils could extend their lead, Loyer drew a charging call on Roach, a 4-star freshman guard. Roach pushed the ball the length of the court and into lane against Loyer.

ESPN play-by-play man Sean McDonough — maybe with a quick assumption considering the profiles to the two guards involved — said the foul was on Loyer. He quickly had to correct himself upon the game official’s call.

The score was still 13-3 after missed shots from both teams when Bilas offered this ominous comment: “One of the issues for Michigan State is the point guard. They’ve got to have somebody step up and run the team whether it’s Rocket Watts or Foster Loyer – no matter who it is.”

Note to Izzo: Coach, it’s not just the print writers that have doubted Loyer based on his first two seasons.

But with 14:38 left, Loyer drew another charge in the lane, this time on Duke’s 5-star freshman guard, D.J. Steward. Michigan State followed with back-to-back buckets by Henry to start the comeback. The Spartans, having captured the momentum, kept closing the deficit.

Loyer exited the game but returned to hit a three-pointer for a 29-29 tie with 3:14 until the half.

The Spartans went to the locker room with a 37-33 lead. They extended their lead to 16 points until Duke’s final rally. Loyer picked up a third charging call against Duke in the second half.

It was only a year ago Duke’s Tre Jones literally walked over Loyer’s chest on a failed attempt to draw a charging call. Duke started fast in that game, too, but Michigan State never reversed the momentum. The Spartans lost 87-75 in a game that wasn’t that close played 363 days ago at the Breslin Center.

Loyer finished this year’s game with five points, although it should have been seven. He was a 90.9 percent free throw shooter a year ago, but he’s sitting at 71.4 (5-of-7) after making only 2-of-4 at Duke. He can’t miss those free throws in the future.

But he was on the floor to help handle the ball and kill the final couple minutes.

Something not to overlook from Loyer’s performance was he won’t face a better defender than Duke senior Jordan Goldwire (6-2, 184). Loyer might face bigger guards as he did against Notre Dame when his minutes were limited, but Goldwire has NBA defensive ability.

Krzyzewski calls him the best athlete on the team, but since he’s not an explosive scorer his overall athleticism is overlooked. Goldwire might have an NFL opportunity if a team has scouts smart to notice him in a Duke hoop game.

Loyer’s teammates voted him a team captain to start the year. It’s a measure of their respect for him despite whatever struggles he endured as a freshman and sophomore. He was a surprise starter scoring 20 points in the opening-night win over Eastern Michigan, but he limited 17 minutes and three points in the win over Notre Dame when the Irish posted him up with bigger guards.

Izzo waited until Duke to start Watts; he had bruised his knee in preseaon practices.

Who knows where the Duke game will take him toward a bigger role? Maybe there is an iconic shot in his future – a Terry Donnelly-like shot.

In the 1979 Magic Johnson-Larry Bird NCAA championship game that Michigan State won over Indiana State, Donnelley was a role-playing guard. He hit 5-of-6 shots from 16 to 18 feet when the defense sloughed off him to help on Johnson or Greg Kelser.

Donnelly had limited skills, but he was good enough to get on the floor for his moment in time. Loyer may have graduated in the Duke game to that trust level. He needed to do so to be on the floor for any big moments awaiting the Spartans.

Michigan State returns to the court against Detroit Mercy at 5 p.m. Friday at the Breslin Center. The Spartans are home again Dec. 6 against Western Michigan before traveling to Virginia for the ACC/Big Ten Challenge at 9:15 p.m. in Charlottesville.