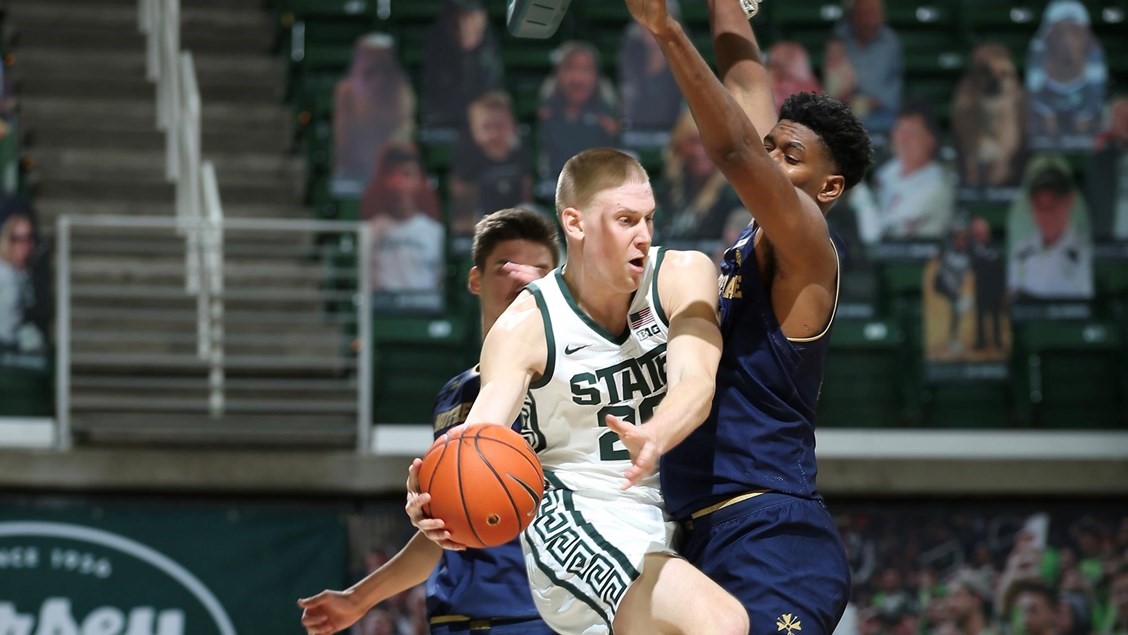 MSUings on the Michigan State football upsetting No. 8-ranked Northwestern 29-20 Saturday afternoon at Spartan Stadium and the Spartans’ No. 13 basketball team defeating Notre Dame 80-70 next door in the evening at the Breslin Center.

First-year coach Mel Tucker’s football Spartans improved to 2-3 with impressive play on both sides of the ball. Quarterback Rocky Lombardi threw two touchdown passes and the defense prevented the Wildcats from completing a second-half comeback that dropped Northwestern to 5-1.

Izzo’s Spartans (2-0) have beaten Eastern Michigan and Notre Dame with the kind of team Izzo likes – sharing the ball and playing defense. Michigan State totaled 26 assists on 30 field goals and held Notre Dame to 28.6-percent shooting in the first half. The Spartans led 39-26 at halftime and by as much as 28 points with 12:57 left in the second half.

Michigan State 26th-year coach opened his post-game comments sounding like a fan, first mentioning the football team’s victory and the hockey team’s 3-2 win in overtime at Ohio State that night before commenting on his team.

“What a great day to be a Spartan,” Izzo said. “I got to watch a little bit of that football game, and I am so proud of Mel. Our defense was unbelievable, and Rocky — nice job. And I find out that (coach) Danton (Cole) and our hockey team beat Ohio State. I was thinking boy if they (fans) were coming from football to basketball this place would be rocking.”

The logistics, primarily parking, would never have permitted a home football and home basketball game to be scheduled so closely together, but you get the point. Izzo loves the college atmosphere even it had to be imagined with the restrictions of a COVID-19 pandemic.

FOOTBALL PIVOTS TO AN UPWARD SWING

Michigan State’s season teetered on a lost year following the last two performances – a 49-7 loss at Iowa and 24-0 defeat at home to Indiana – and an unintended bye due to Maryland’s COVID-19 infections.

A bounce-back performance in a competitive loss was necessary to show Tucker had players’ ears and the can respond to his coaching. Otherwise, 10 months after he was hired, he would be entering the off-season starting all over with his rebuilding task bigger than previously believed.

But the Spartans got more than that with victory. It turned out an upset wasn’t too much to ask for, after all.

Michigan State showed it could strike quickly, Lombardi connecting on a 75-yard touchdown pass to Jalen Nailor for a 7-0 lead less than five minutes into the game. The Spartans built leads of 10-0 on Matt Coghlin’s 22-yard field and 17-0 on Lombardi’s 15-yard TD pass to Jayden Reed.

Northwestern closed the deficit to 17-6 at halftime and took a 20-17 lead early in the fourth quarter, but the Spartans didn’t collapse. A team without a coach’s voice bolstering their belief in the program falls apart at that point. Instead, it listens to inward doubts and blames others with thoughts of, “Here we go again.”

On both scores, the Spartans enjoyed field advantage, but they needed clutch first downs to get into scoring range. On the first score, Lombardi completed a thrd-and-2 pass to Nailor that he converted into a 20-yard gain to the Northwestern 25. On the second score, Lombardi ran 12 yards on a third-and-10 to the Wildcats’ 38. Seven more yards gained set up the 48-yarder.

Michigan State has two more dates to finish 2020 ascending rather than descending. The Spartans are scheduled to play No. 3 Ohio State (4-0) at Spartan Stadium and travel for a Dec. 12 game at Penn State.

Ohio State’s game last week against Illinois had to be canceled due to COVID-19 outbreak that included head coach Ryan Day.

The college environment Izzo treasures – enough that the Spartans have been fortunate he has turned down multiple NBA job offers — shifts to No. 9 Duke (1-0) in Durham, N.C., at 7:30 p.m. Tuesday at Cameron Indoor Stadium.

The game was supposed to be played in Chicago as part of the 10tyh annual Champions Classic, but the pandemic forced the change of plans. Michigan State agreed to travel this year with the promise of Duke playing a return trip to East Lansing next year or the near future.

Krzyzewskiville, where students camp out for tickets, will be a ghost town when the Spartans are dropped off at Cameron. The only fans represented in the arena will be images of the Cameron Crazies depicted on a mural-like tarp spanning the student section and the band behind the basket at the visitor’s end.

This season, Michigan State and Duke both have talented, deep and versatile rosters but are lacking the proven “go-to” guy. That’s one reason why Illinois and Iowa were picked as preseason Big Ten favorites over the Spartans, who were tabbed in the fourth slot.

Duke had its first game against Gardner Webb on Nov. 25 canceled due to Gardner Webb’s COVID-19 infections before opening the season with an 81-71 win over Coppin State Saturday at Cameron.

On the surface, the Blue Devils look like another one of the NBA lottery pick seasons. Freshman Jalen Johnson debuted with a 19-19 scoring-rebound double-double and freshman combo guard D.J. Stewart scored a game-high 24 points.

But Duke’s 22 turnovers tempered the performance. Many of them were unforced as the Blue Devils struggled against essentially Coppin’s five-guard offense. That limited the playing time of 5-star freshman center Mark Williams to four points and two minutes.

“They (Coppin State) played with that toughness,” Duke coach Mike Krzyzewski said. “We’ll work on it. You won win many games if you turn it over 22 times. We’re shooting over 50 percent (53.1, 34-of-64) from the floor and that’s 22 times you didn’t get a shot. And you gave them a runout on some of those. Overall, our defense was pretty good, but not on the runouts.”

Maryland scored 28 points off turnovers and 18 off fast breaks.

Johnson, Duke’s only first-team preseason All-ACC pick, didn’t play with the hesitation of a young player that at times hampered Steward and the other freshmen. Point guard Jeremy Roach had six points and four assists but three turnovers. The other two freshmen, Jaemyn Brakefield and Henry Coleman, were both limited in minutes as forwards similar to Williams.

“I didn’t really have any expectations other than to go out there and be myself,” said Johnson, a 6-9, 220-pounder from Milwaukee. “You saw what happened when I just be myself. I just let the game come to me and whatever happens, happens. Most importantly, getting the W is what matters.”