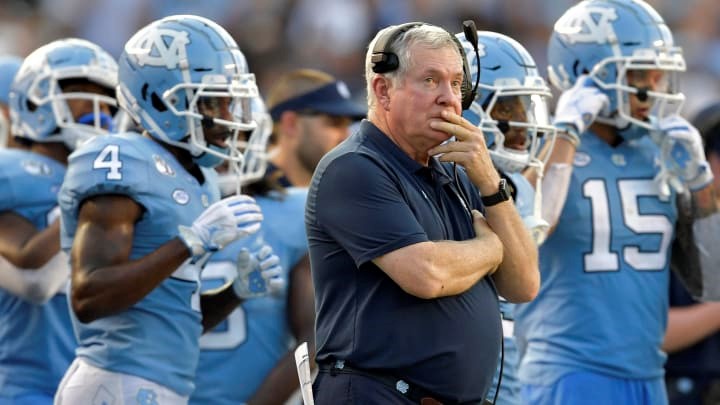 North Carolina football climbed to No. 5 in the national rankings with a surprising 3-0 start, while across the Triangle Duke’s promising opener in a narrow loss at Notre Dame quickly fizzled to 0-4.

That was a month ago, but it turns out the two ACC schools weren’t as far apart as it seemed as they prepare to face each other. The Tar Heels (4-2, 4-2 ACC) travel to Duke (2-5, 1-5) to face the Blue Devils at noon Saturday at Wallace Wade Stadium.

North Carolina’s tumble resulted from losing two out of its last three games – sandwiching losses at Florida State ad Virginia around a win over N.C. State. Meanwhile, Duke has won two of two of three – beating Syracuse and Charlotte while losing to N.C. State – to stop the bleeding and give them hope for salvaging a .500 season.

“The truth about college football right now is there are four or five teams that are better than the rest of us,” North Carolina coach Mack Brown said. “There are about 20-something teams that are alike, and you can win or lose every weekend. There are seven to 10 or plays that make a different in a close ball game.

“That’s what we didn’t make at Florida State and didn’t make at Charlottesville with Virginia. So, give them credit. I thought both of those teams us blocked us better than we blocked them. The good thing about this is our fans are disappointed. I’m disappointed. That means our expectations are high again.”

Duke isn’t considered among the “20-something” teams, while North Carolina still ranks No. 23 in the USA Today (coaches’ poll). The Tar Heels have 92 points in the AP poll (writers) to equal No 28.

College football, always unpredictable other than a handful of schools at the top that dominate recruiting, has been more so this year due to the COVID-19 pandemic. Teams that lost spring football and lacked off-season workouts have struggled to find an identity. And at some other schools, COVID-19 infections affect their rosters week-to-week.

A convergence of recent results to watch for is how Duke’s improved running game matches up against North Carolina’s struggling rush defense.

Duke, which struggled to run the ball or protect quarterback Chase Brice in the first four losses, had two 100-yard rushers in both the wins over Syracuse (38-24) and Charlotte (53-19).

Duke’s performance against Charlotte, a 7-5 Conference-USA team a year ago that dropped to 2-3, was despite true freshman Graham Barton making his first start. The Blue Devils lost All-ACC honorable mention center Jack Wohlabaugh for the season with a knee injury shortly before the season opener and backup Will Taylor started the next six games. But with his knee injury against N.C. State that required reconstructive surgery, Barton, a 6-foot-6, 315-pounder, finished the game. He played well enough to start against Charlotte.

“Graham is a great player,” said starting senior guard Rakavius Chambers (6-4, 335). “He’s a young player, but he’s taken to heart he’s not a true freshman anymore. He’s a sophomore in terms of football terms. He’s been playing long enough. He’s stepped up. He’s a guy you can depend on to give you his best effort on every single play.

“I’ve been helping with calls and we’ve been watching film outside of normal meeting time to make sure he has the right mind set and knows the communication calls. I don’t have any worries about him.”

A year ago, North Carolina reclaimed the Victory Bell in the rivalry game with a 20-17 victory.

My MSUings on Spartans’ loss to Rutgers