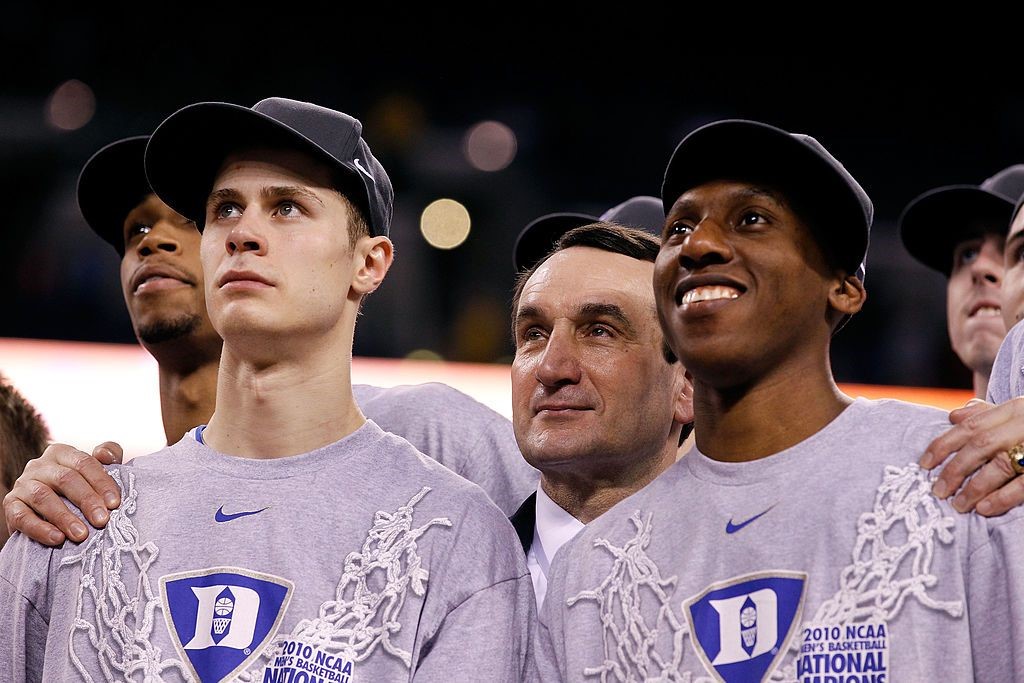 Nolan Smith and Jon Scheyer, over the years, have engaged in plenty conversations that analyze basketball and contemplate modern life.

They’ve grown together from elite high school recruits some 15 years ago to Duke 2010 national championship teammates. Now, they’re 30-somethings on the staff of their iconic head coach, Mike Krzyzewksi.

That’s a lot in common for two guys from opposite backgrounds.

Smith, African-American, played high school basketball in the Washington, D.C., area; Scheyer, Jewish, grew up playing in suburban Chicago. Those differences set the table for a range of discussions and reaching an understanding on race and prejudice. Athletes and coaches spend plenty of time at night on the road.

For Scheyer, some of it has been gaining a better understanding of white privilege. It’s a caste concept – as Isabell Wilkerson explains in her New York Times bestselling book, “Caste” — that many Americans fail to grasp in the age of Trump and white grievance pushback.

Scheyer acknowledged during a recent Zoom call he’s continues to learn in 2020, thanks to the issues the Black Lives Matter movement has brought to the forefront as it gained momentum last spring and summer.

“He’s enlightened everybody, Black White, whatever you may be,” Scheyer said. “I know firsthand he’s been a guy I’ve learned from throughout this. We’ve known each other for some time, so these aren’t necessarily new conversations. But some of it is. The example he has set for the players or people in our program — whatever race they may be — I think it’s been incredible.”

Scheyer, 33, followed his college career playing professionally overseas for three years before returning to Duke as an assistant coach in 2014. He was promoted to associate head coach in 2018 following the departure of Jeff Capel to Pitt as the Panthers’ head coach.

Smith, 32, spent two seasons in the NBA with the Portland Trailblazers and two more years overseas or in the NBA G-League. He returned to campus in 2016 as a special and was promoted in 2018 to his current role, Director of Basketball Operations and Player Development.

In August, Smith organized a Black Lives Matter protest in Krzyzewskiville – the grassy area outside Cameron Indoor Stadium where students wait for tickets – in response to what was then the latest example of a police shooting of a Black man, this time in Kenosha, Wisconsin.

He took to the microphone first before introducing other speakers that included Krzyzewski, women’s basketball coach Kara Lawson, players and professors.

“I can’t change the world,” Smith said, “but goddammit I can change Duke while I’m in here. One thing Coach K always says is leave every place better than when you got there. That’s what I’m here to do.”

Smith’s commitment doesn’t go over well with many conservative Americans that fail to accept the meaning of Black Lives Matter. Duke is a largely white campus with a conservative history.

It’s safe to assume Duke’s most prominent alumnus in today’s political world, Stephen Miller, doesn’t agree. The senior advisor to President Donald Trump was architect of the immigration policy that housed Mexican children in cages after they were separated from their parents when stopped crossing the border.

That won’t deter Smith, especially with the backing of his boss and colleagues.

“He’s not held back anything,” Scheyer said. “He’s spoken from the heart. He has set an amazing example for our guys as well. I think he knows we support him like crazy. The thing that’s been disappointing from my point of view is the negative feedback that came with that. That’s disappointing, whether it be from Duke supporters or not. The things he’s speaking up on — as our players and we all have – it’s about right and wrong and speaking from the heart — speaking from our hearts.”

Scheyer welcomed Smith back to campus long before the enlightening spring and summer of 2020, but he values it more now.

“It’s been now about 12 years of playing together coaching together,” said Scheyer in wrapping up a expansive comment. “I’m proud of him, lucky to call him a friend. Sorry for the long answer, but it deserves a long answer because I’m really proud of what he’s done and to be by his side.”

“He’s got it,” Coach K said. “Not just talent, he has the personality, the people skills and the organizational skills. He’s done an amazing job during the pandemic with the social unrest. We have a brotherhood Zoom tonight with our former players. Nolan started that.”

Kryzyzewski said Smith has already received offers to move, but he has advised him to wait for a better opportunity.

“He’s going to be a real early head coach at a college or university — I could see him in the pros, too,” Krzyzewski said. “He’s just got it. He’s been able to do more in this pandemic in his role as the Director of Basketball Operations. They’ve kept me a way, and it’s given him an opportunity to work with the kids too.”

Smith also is on the Board for the Emily K Foundation, an education project in Durham that Krzyzewsk started 15 years ago named for his mother.

“In our community, he’s like the Pied Piper,” he said. “I thought that he really connects with people. His potential is unlimited.”