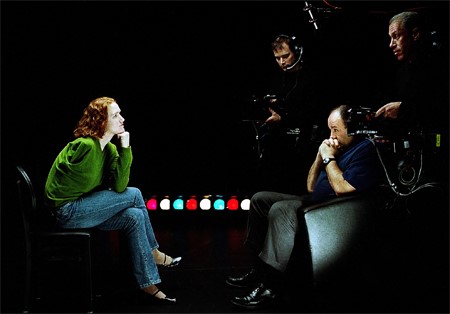 PHOTO: Dawn Halfaker interviewed by James Gandolfini for his ALive Days special in 2007 on HBO.

NOTE: I’ve reposted this story I originally wrote July 17, 2007 as a columnist for Voice of San Diego.

Heroes, warriors and courage are words thrown around too loosely in sports, especially by those that have never been in battle.

Capt. Dawn Halfaker (U.S. Army retired), a women’s basketball star at the Army as a West Point cadet from San Diego/s Rancho Bernardo High, lived the definitions in sports and the battlefieldl

On June 19, 2004, Halfaker (then a lieutenant) was the commanding officer in a military police platoon gathering intelligence in Baqouba, Iraq, a hot spot northeast of Baghdad. Halfaker and four soldiers were in an armored Humvee when insurgents fired upon them with a rocket-propelled grenade.

The explosion left Halfaker’s right arm hanging from her shoulder by only the skin, the humerus bone having been blown away. She was covered with blood, her face was burned and she struggled to breathe, but she still had her West Point-trained presence of mind.

Halfaker, fighting to remain conscious, gave orders. She saw that Staff Sgt. Norberto Lara, seated in front of her in the passenger seat, had lost his arm.

“Get out of the kill zone!” Halfaker shouted to the driver.

The driver found cover and medics arrived. She was bleeding and lying in dirt. As she was treated, she wondered about the condition of Lara and the others in the patrol.

“Courage Under Fire” was the 1996 movie title of a fictional woman officer on the front-lines in command of men. Halfaker’s story is the real deal, not a Hollywood script.

“People ask me all the time if West Point prepares you to be a military officer,” Halfaker said. “I say, ‘Absolutely.’ I was rendered combat ineffective, I was in a lot of pain, and I didn’t know the full extent of what had happened in the madness of a hostile situation. But I tried to stay focused and not panic. That was from the academy and the military in general.”

She was rushed to a front-line military hospital and placed in a medically induced coma while clinging to life. Then she was sent briefly to an Army hospital in Landstuhl, Germany.

Halfaker woke up 10 days later at Walter Reed Hospital in Washington, D.C., with her right arm amputated. She was one of the first American military women to lose a limb in Iraq combat.

“The doctors did everything they could, but I had bad infections from the arm and my lungs weren’t working,” Halfaker said. “My body was fighting off so many things, they had to cut off my arm. Once they did, I started to improve dramatically.”

Halfaker, awarded a Purple Heart and Bronze Star, was confronted with a comeback unlike any she faced as a college basketball player or three-sport high school athlete. But at the same time, she remained attached to those team huddles at Rancho Bernardo and West Point.

“Athletics is a huge piece of it,” Halfaker said. “I’ve had to work hard in therapy, and I’ve learned to depend on others. You gain relationships from teamwork, and you have the will to achieve victory. Athletics really played into my ability to continue and muster through everything.”

Halfaker was medically retired after rehab, and in January 2006, she founded her own security consulting company, Halfaker and Associates. She’s based in Washington, D.C., but the company also does business in Chicago, San Antonio and Mississippi.

“I’m hoping we’re successful enough to grow and open an office in San Diego,” she said with a laugh. “I’m proud to be a San Diegan. San Diego is such a great place, and I don’t get home enough. When I was in the hospital, I couldn’t believe all the people I heard from that cared.”

At West Point, she was a four-year varsity letter winner. She still holds the Army record for steals in a season (85, 3.1 per game) and ranks second in career steals (222).

If you accept the notion that the United States is a nation of reluctant warriors — we fight only as a last resort but respond fiercely when provoked — Halfaker’s story plays to the American theme.

She’s not from a military family, and when Army recruited her to play college basketball, the 9/11 attacks and war on terrorism were conflicts in the future. But she served her country when called upon.

“I’m asked if I wish I hadn’t gone to West Point,” Halfaker said. “It’s a fair question. What I say is I don’t regret one decision that I made. I wouldn’t be close to the person I am, and I wouldn’t trade my experiences at West Point for anything. You know how people say they’d give their right arm to do something? Well, I did.”

Halfaker is among 26,000-plus Americans wounded in Iraq, and the comeback trail has been harder for some than for others.

“I have my bad days, and it’s a constant journey,” Halfaker said. “I wish this had never happened — that I never knew this side of war — and that I could get my arm back. But I remind myself I’m fortunate. Some of my friends didn’t make it back.”

She said an important step to her recovery was getting back to work quickly. She was still in physical therapy when she accepted an internship with U.S. Congressman Duncan Hunter (R-Calif.) of San Diego.

“There is a window when you’re wounded that you can continue to sit in the hospital, because you’re comfortable in that environment with others that are like you,” she said. “But I wanted to get better quickly. I was fortunate to have the support of family and friends.”

Halfaker, whose right-handed skills made her an elite athlete, now had to learn to do everything left-handed from brushing her hair to eating to getting to work.

“I had to learn to drive to work in a town I didn’t know,” she said. “But I picked up things quickly and I learned people were receptive to me. I enjoyed working for Congress. I don’t think I’ve thanked Congressman Hunter enough.”

One way she thanks him is her work with the Wounded Warriors Project, a nonprofit organization that assists military personnel that have been wounded serving their country. She has served as a board member and last month was elected a vice-president.

Despite experiencing the horror of war, it’s important to her to remain involved in military issues and have a role in the war on terrorism. Founding her security company keeps her connected. Her company provides experienced consulting on terrorism security and provides employment opportunities for wounded warriors and retired military personnel.

She has twice testified before Congress and has been a guest on television news shows such as MSNBC’s “Hardball” with Chris Matthews. Her Congressional testimony on May 17 was before the Subcommittee on Economic Opportunity of the House Committee on Veterans’ Affairs.

“We want to provide a quality product to the government,” Halfaker said. “We know what it’s like to serve in the military and we want that connection. We’re not sitting at the table anymore, but we’re behind the scenes supporting those people who do make the decisions.”

She’s also maintained her love of sports, competing in tennis and a soccer recreation league.

“I still have that competitive spirit, but right now most of it is being used in my business,” she said. “I’ve always thought I would be a terrible coach because I’m impatient. I had to get my aggression out on the court. But now I’m starting to think I’d love to be in coaching down the road.”

CAPT. HALFAKER’S RIGHT ARM IS MISSING; NOT HER HEART AND NOT HER LEADERSHIP