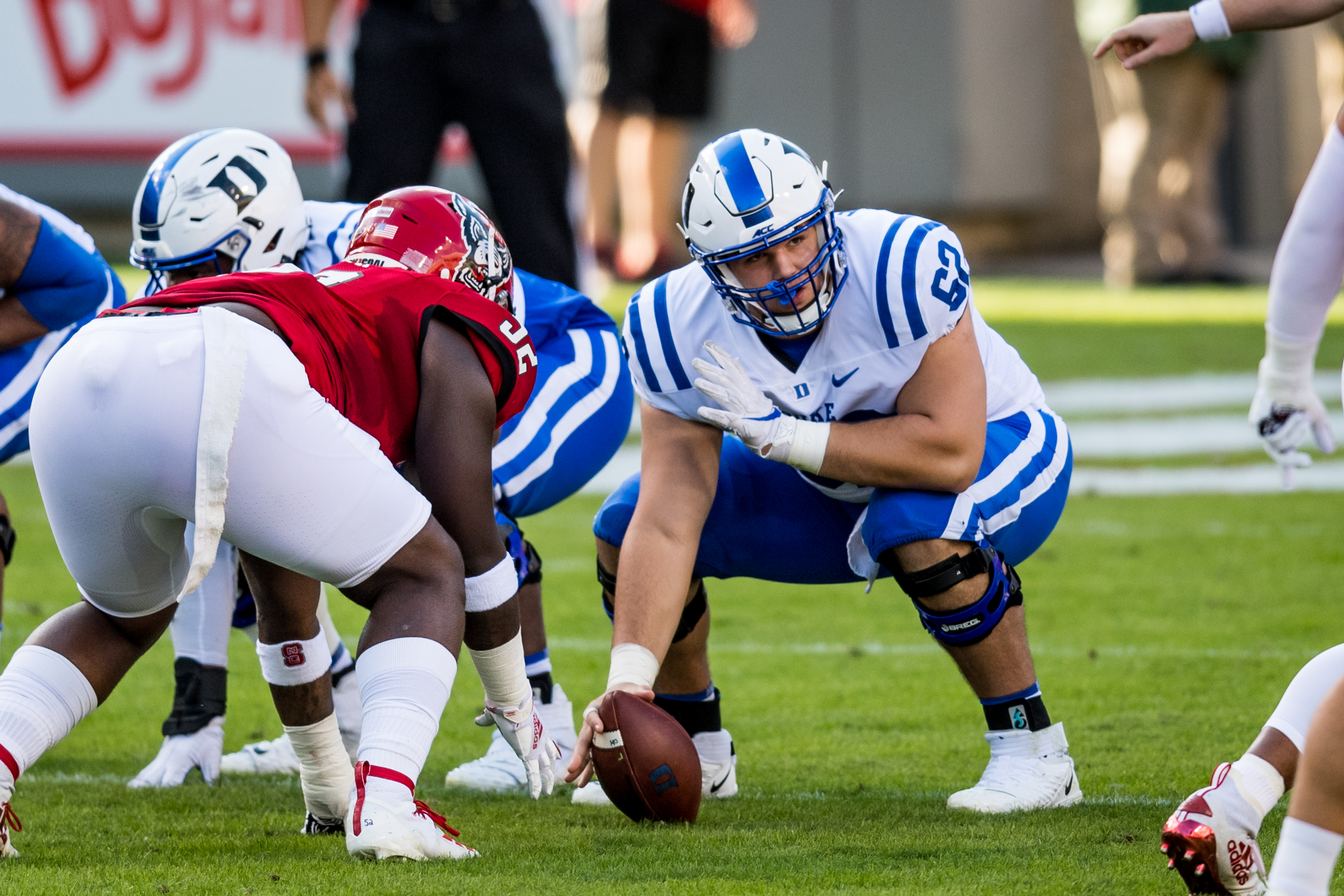 Duke football is back on the game-week preparation clock following a bye, but not everybody has returned to the practice field.

The struggling Blue Devils (1-5) continue to struggle with injuries as they prepare to face Charlotte (2-1), a Conference-USA member, in a 7 p.m. game Saturday at Wallace Wade Stadium.

Duke head coach David Cutcliffe confirmed the expected, that the knee injury starting center Will Taylor suffered in the N.C. State loss on Oct .17 has likely ended his season. Taylor is scheduled for knee surgery Tuesday, although Cutcliffe added he officially listed as out indefinitely.

Cutcliffe also announced that senior cornerback Mark Gilbert, who missed all of last year and 10 of the 13 games in 2018 with a hip injury, won’t make it back this season from his latest surgery. He he had bone fragments removed from his right foot following the season’s second game against Boston College.

With the rehab the 6-foot-1, 175-pounder from Fayetteville Terry Sanford faces, he informed Cutcliffe he plans to opt out for the remainder the season and prepare for the NFL draft. Gilbert was an All-ACC pick as a sophomore in 2017 before his 2018 injury.

“If he recovers, he can play in the NFL,” Cutcliffe said. “He wanted to let his teammates know (he’s not returning) and he’s moving forward.”

In addition to his NFL aspirations, Gilbert majored in sociology and pursued a certificate in documentary studies to work on the other side of the camera.

Cutcliffe added cornerback Josh Blackwell is also recovering from foot surgery after the season’s second game. Leonard Johnson, who moved into the starting lineup without Gilbert and Blackwell, is questionable after an injury in the N.C. State game.

The lineup change on offense is at center, with true freshman Graham Barton set to make his first true start. The 6-foot-6, 315-pounder was recruited as a tackle out of Brentwood (Tenn.) Ravenwood, but he’s third man up at center.

First, John Wohalabaugh, honorable mention All-ACC center a year ago, was lost for the year shortly before the season opener with knee surgery.

Now Will Taylor has joined him on the sidelines. Taylor is scheduled for surgery Tuesday following his injury in the third quarter in the Nov. 17 loss at N.C. State.

Barton was a consensus 3-star prospect, the type talent Cutcliffe has emphasized to improve his team’s strength on both sides of the ball in the trenches. He began fall camp working out as a tackle and guard before also getting work at center.

“Graham is a great athlete to be as big as he is,” Cutciffe said. “He’s tall and well over 300 pounds, but he looks like a 270-pounder. He bends well, he moves well he’s got great balance. He’s still learning the game and certainly learning center, but his physical skill set is outstanding.”

Cutcliffe rotated his offensive linemen to seek versatility with the possibility of the COVID-19 pandemic thinning out candidates. Ironically, it’s been old-fashioned knee injuries that have plagued the Blue Devils.

Behind Barton on the updated depth chart are redshirt freshman Elijah Wroten (6-3, 330) and true freshman Addison Penn (6-3, 300), who had setbacks with injuries early in fall camp before recovering.

Cutcliffe added a benefit of the bye week was time for Chase Brice to focus on learning the offense and his teammates without the benefit of spring football, off-season workouts with teammates and then a short fall camp.

Charlotte is 2-1 in C-USA play and 2-2 overall. The 49ers opened with losses to Appalachian State and Florida Atlantic but won its last two against North Texas and UTEP. Duke to COVD-19, Charlotte has had one game canceled (North Carolina) and two postponed (Georgia State and Florida International).

Kansas arrives looking like what Duke was before Cutcliffe