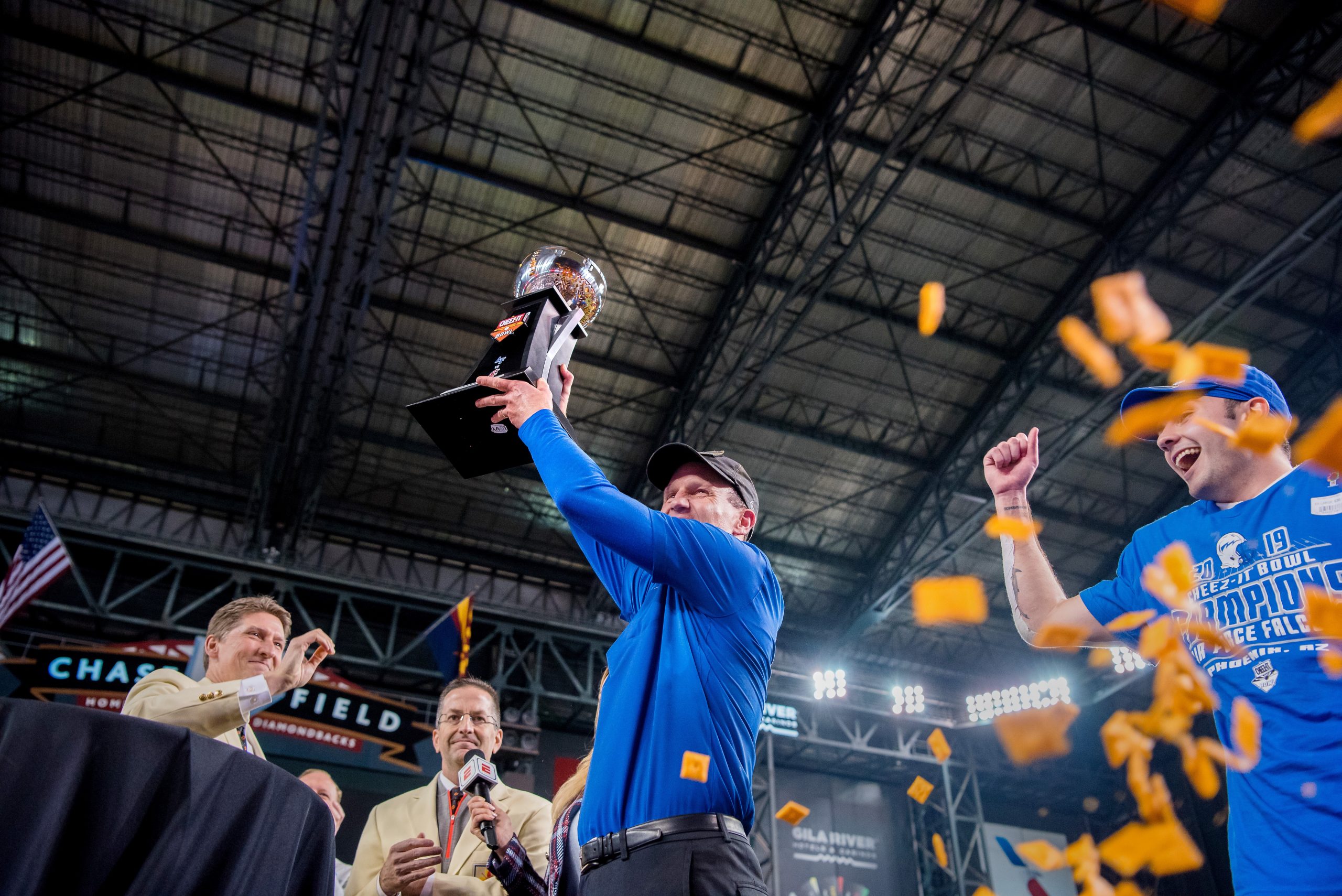 It’s not often as a sportswriter offers a suggestion and a football coach agrees it’s good idea. Yet, that’s what I’m pleased to report I heard from Air Force coach Troy Calhoun on Tuesday during a Zoom call.

The Army-Navy Game, with its 120-year history, has historically owned the stage as college football’s final regular season game. So, since I began writing about the three service academies, I’ve wondered if Air Force deserves its own stage in the Commander-in-Chief’s Trophy round-robin series.

I quizzed Army, Navy and Air Force players throughout the 2019 season and all but one thought agreed with the idea.

Perhaps a grand kickoff date to open the season with the stage all to the Falcons while facing Army and Navy in alternate years.

“I have thought about that, quite honestly,” said Calhoun approvingly as he met with the media prior to his Falcons (1-2) preparing to face Army (6-1), ranked No. 23 in the USA Today coaches’ poll, at 11:30 am Saturday at West Point.

Calhoun mentioned some obstacles to overcome before continuing his thoughts. The academies, unlike civilian colleges, have incoming freshmen attend basic training during summer before they report to preseason football camp. The upperclassmen also have summer military training responsibilities.

This year’s season openers, before the COVID-19 pandemic shuffled schedules, was set for Saturday, Sept.  5. For Air Force to have a weekend to itself against Army or Navy in 2020, it would have meant opening the season on a Saturday in August.

“Is that feasible? Calhoun said rhetorically. “I guess you could. I do think what would be really, really good — and I think holistically there are some adjustments that could occur to either one of those games – is you look at it maybe once every four years. Do you play at a neutral site? Do you play the second weekend of September?

“I don’t want to patronize 9/11 in any way, but there are a good number of big games that first weekend in September; the games in Houston, or Dallas or Atlanta. What if you did that the second weekend?”

Actually, a service academy game around 9/11, a somber yet patriotic date, would be entirely appropriate.

As a quick history lesson, Army, Navy and Air Force football all saw their talent pools dwindle from the 1960s and 1970s combination of the Vietnam quagmire and the rapid escalation of pro salaries due to the AFL-NFL bidding wars.

But the 9/11 terrorist attacks prompted voluntary enlistments throughout the nation from the enlisted ranks to the academies. Football players who weren’t elite recruits ticketed for an NFL future were no different.

As a result, the academy talent pool is deeper, although it will never again be what it was when national recruits considered the academies. Army’s Pete Dawkins won the 1958 Heisman Trophy and Navy had two 1960s winners, Joe Bellino (1960) and Roger Staubach (1963).

As for a 9/11-centered event, the NFL has long waved the flag chasing in pursuit of money more than reflecting patriotism. Some NFL teams in recent years were exposed to have staged military appreciation days as grand gestures on their part when in reality they took big payments from the Pentagon to put on a show.

There is nothing phony about highlighting a service academy game. The players on the field and their classmates in the stands have committed to serving their country during an endless war on terrorism.

As it is now, Air Force’s C-i-C games alternate home-and-home with Navy in early October and Army in early November. Air Force defeated Navy 40-9 on Oct. 3 in what was the Falcons’ season opener due to COVID-19 changes to the schedule.

The average college football fan knows little about the Air Force-Army or Air Force-Navy games compared to the Army-Navy Game, but players at both the Army and Navy have long told me their games with Air Force are equally intense and physical.

“Service academy games are the most intense in college football,” said Air Force junior Corvan Taylor, a 6-foot-2, 205-pound starting cornerback from Gilbert, Arizona. “We’re very aggressive, well-coached, well-schemed teams. We’re a different type of player that goes to the serve academies. We’re really physical and really get after it out there.”

Air Force, with a win on Saturday, can clinch the Commander-in-Chief’s Trophy. An Army victory means the Black Knights can clinch the C-i-C in the Army-Navy Game on Dec. 12, which this year will be played at West Point’s Michie Stadium due to COVID-19.

It’s the first time a neutral stadium hasn’t been the site since the 1943 and 1944 World War II games. Meanwhile, Navy while be playing for a split in the round-robin series.

But this is the 21st century. This is an America with 0.4 percent of its population serving in an all-volunteer military. The academies are filled with men and women willing to do what most of us haven’t done — sign up for a five-year military commitment in perilous times.

In a story I wrote last year, I quoted Phil McConkey, a Navy grad and Super Bowl champion with the New York Giants, on the recent veterans he works with in his financial services company, Academy Secruities.

But Army’s 2017 win of the round-robin series was its first since 1996. Air Force began to dominate the C-i-C when Fisher DeBerry brought the triple option to the Falcons first as offensive coordinator (1981) and then as head coach, 1984-2006. DeBerry’s teams won the C-i-C 14 times in 23 years; Navy and Army began to copy the formula.

Navy caught up to Air Force when Paul Johnson took over the program in 2002 and was succeeded by his offensive coordinator and still the Midshipmen’s head coach, Ken Niumatalolo. Johnson won the C-i-C five times, Niumatalolo six.

Air Force also made two players available for interviews on Tuesday, senior starting center Nick Noyen and junior starting cornerback Corvan Taylor. Both said they were in favor of bookend stage for the Falcons against Army or Navy.

“I think that’s a cool idea,” Taylor said. “I know the Army-Navy Game has its own traditions. We’re the newer service academy compared to them. So, I understand why they have their game, but I think it’d be a cool idea.”

Transfer portal? They don’t know it at West Point