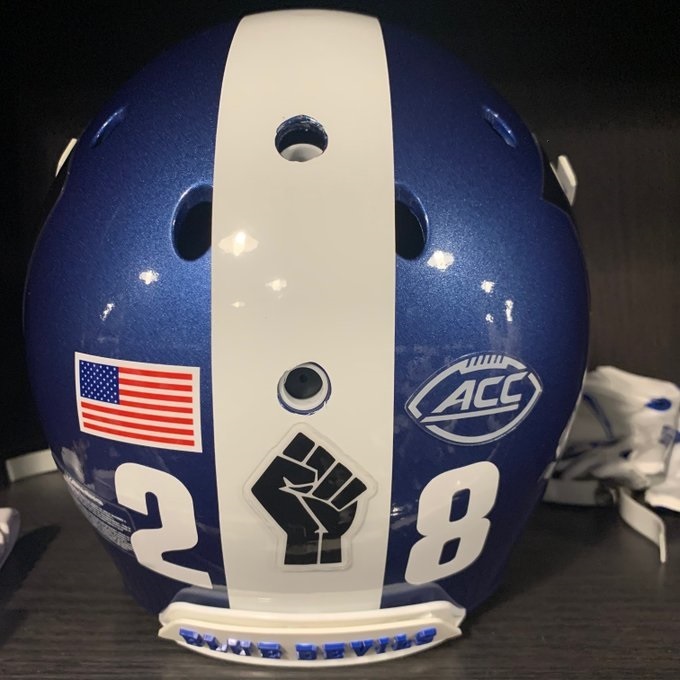 Duke football opened the season with anything but a dink-and-dunk approach to addressing Black Lives Matters and social justice. Teams warming up in T-shirts sends a message, but as a statement it’s basically a dump-off pass.

The Blue Devils took the field Saturday at Notre Dame with a powerful running play into the middle of the issue that riles some fans unwilling to accept systemic racism or social injustice. The players’ helmets featured a Black D on each side and a Black fist decal stood out from the back-middle strip.

Maybe too bold for NBC, which opted to wait until the fourth quarter when the game was decided before explaining the Duke decals to viewers that might otherwise had flipped the channel.

Blue Devils head coach David Cutcliffe was straightforward with his support on the team’s choice of messages and his support. He didn’t choose his words to placate both sides.

“All of our players input,” Cutcliffe said. “Not just our players of color –but every one of our players. That’s a vote for their teammates. That that’s a strong feeling of unity. And that’s how you grow in any difficult time. You do it together. And so, to honor our teammates of color, the black D’s will be worn all year long.”

Clemson took the field Saturday at Wake Forest with helmet stickers such as “Equality” and “Love.” Another sticker had “Black Lives Matter” and “Put a Stop to Racism” but they were smaller letters scrambled together. Not nearly as bold as a Black D and Black fist.

Nevertheless, the response from Clemson fans on Twitter included “BLM is a disgrace” or “BLM is a communist movement.” There was sticker with “Black Lives Matter” and “Put a Stop to Racism” but mixed in small letters.

Alabama doesn’t take the field until Sept. 26 at Missouri, but when coach Nick Saban marched with his players on Sept. 3 in a BLM protest that finished at Foster Auditorium – infamous site of racist Governor George Wallace standing in the school house door in 1963 to block the admission of the school’s first two Black students – some fans complained.

An Alabama backer called into the “The Paul Finebaum Show” on ESPN’s SEC Network after the march to say he was no longer an Alabama fan. Maybe his father also was fine with Alabama coach Bear Bryant maintaining an all-white program until 1971, eight years after Wallace forever disgraced his state and its flagship school.

Maybe Duke sidestepped controversy as an unranked team lacking the sometimes irrational fan bases of Clemson and Alabama as powerhouse programs, but the point is the Durham school – which didn’t dress its first Black football player on scholarship until 1972 – encouraged its players to stand out.

“I thought it was a cool thing to have the Black decals on the helmet,” said Duke quarterback Chase Brice, a Clemson grad transfer, who made his first college start at Notre Dame. “I think it’s a great way to show it to college football, the media and everything. We were all on board for that decision.”

Prior to opening the season, the Blue Devils were already wearing T-shirts that also made a bold statement.

“The difference is we have Black fist and White fist forming a Bull City log,” Cutcliffe said. “So it’s about our thoughts, our beliefs and our togetherness as we continue to move forward.”

“I think everybody in society is starting to realizing there is social injustice in the country, opening their eyes that Black lives do matter and we deserve social justice. The T-shirt saying that and displaying on our helmet are remembering what we have to accomplish in this country as a whole.”

Protests have to make a strong statement to effect change. If Rose Parks merely complained giving up her seat on the bus in 1955 was unfair, there would have been no Montgomery Bus Boycott Martin Luther King led, launching the Civil Rights movement resulting in the 1964 and 1965 Civil Rights Acts. Parks protested, remaining seated, until she was arrested

Duke football is making an arresting statement with its helmets other schools need to match.