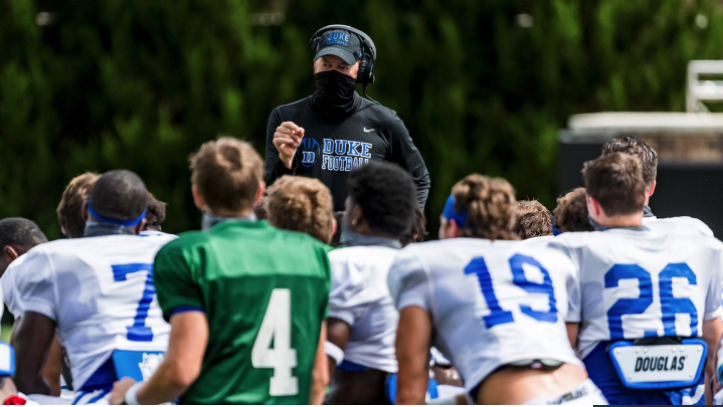 Duke football David Cutcliffe coach speaks optimistically about his returning talent each time he unmasks from practice and speaks before a Zoom camera.

He likes the growth of his offense line, the experience of offensive backfield, the budding talent of his receivers, the big-time ability of his tight end, Noah Gray.

The defensive ends, with Chris Rumph II drawing first-round NFL draft potential, can pressure the ball. The five-man secondary could be collectively one of his best at Duke.

Now, Cutcliffe knows more about how the quarterback position is shaping up following the first scrimmage of fall camp, a closed 75-play session Saturday at Wallace Wade Stadium.

Cutcliffe has avoided saying too much too soon about Clemson transfer Chase Brice, who joined the team with immediate eligibility upon graduating in the spring. He hadn’t seen him throw live until fall camp opened.

The message has been Brice must earn the job over two returning players, redshirt junior Chris Katrenick and redshirt sophomore Gunnar Holmberg. All three worked with the first unit on Saturday, and Brice put up the biggest numbers.

The statistics were released by the Duke Sports Information Department on the Blue Devils’ goduke.com website. There were no quotes from Cutcliffe on the quarterback play. There were only quotes from players, redshirt sophomore offensive lineman Casey Holman (6-4, 295) and senior safety Michael Carter II (5-10, 185).

Holman started at left tackle this year, but he could be shuffled with the addition of Stanford graduate transfer Devery Hamilton (6-7, 301). He commented on the running game. Senior Deon Jackson (6-0, 215) carried nine times for 50 yards and two touchdowns of two and 13 yards, while redshirt freshman Jordan Waters carried 12 times for 88 yards.

“Deon ran through people today,” Holman said. “He ran hard and didn’t hesitate. He followed our guys that created the holes for him and ran with energy. He wanted it.”

On defense, Carter and sophomore cornerback Jeremiah Lewis both had two pass breakups. Redshirt junior cornerback Josh Blackwell got on the turnover board, returning a touchdown 26 yards for a touchdown.

“I felt good out there,” Carter II said. “Just being around the guys and feeding off each other, it was just good to be out there and sort of in a game simulation. Just to be live and all-out without any restraints was great.”

Rumph II, a senior, and redshirt freshmen Caleb Oppan (6-4, 245), both defensive ends, each recorded a sack. A year ago Rumph (6-3, 225) recorded 13.5 tackles for a loss and 6.5 sacks. He earned first-team All-American recognition from Pro Football Focus and third-team All-ACC honors.

Duke is scheduled to open the season Sept. 12 at Notre Dame.