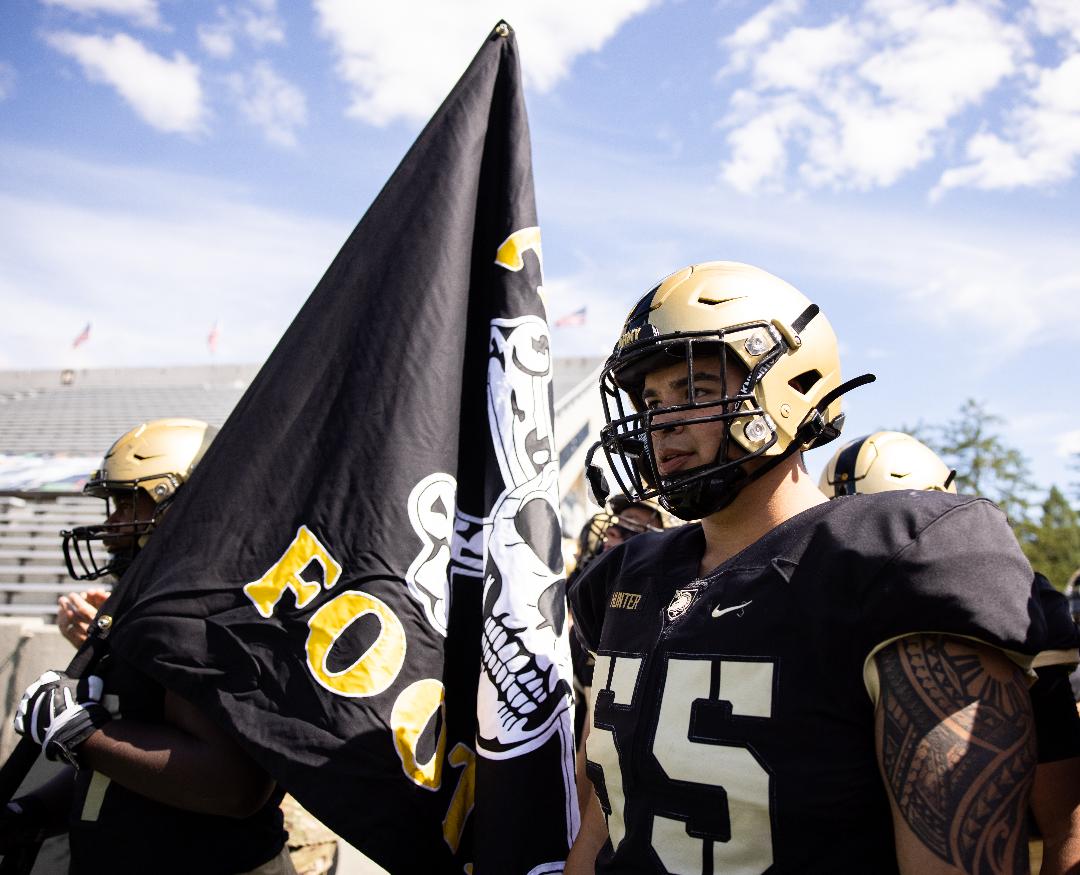 James and Lulu Hunter call their son J.B. “the softie of the family.” Their term of affection is understandable only if you recognize they’re retired non-commissioned Marines. They embraced the Corps’ creed as the military’s toughest branch.

J.B., though, certainly doesn’t look like a “softie” on first impression.

He’s Army football’s third-year starting right tackle, a 6-foot-4, 290-pounder. As for nicknames, he prefers “firstie,” the class designation for West Point seniors about to be commissioned an officer upon graduation.

Hey, what else can he tell you?

Nor does “softie” come to mind as a second or third impression among Army’s opposing defensive coordinators and defensive line coaches. They’ve watched him while studying video tape to prepare their athletes to face Hunter.

Army’s collective grittiness is tested on the road for the first time this season in a Top 25 matchup when the No. 22-ranked Black Knights face No. 14 Cincinnati (1-0) at 3:30 p.m. Saturday (ESPN) at Nippert Stadium.

Hunter, plagued by nagging injuries last year, has opened this season as a refreshed anchor to the offensive line’s right side, helping the Black Knights to a 2-0 start. The triple-option ground attack rolled over Middle Tennessee State (42-0) and Louisiana Monroe (37-7) with 389.5 yards rushing per game to lead the nation.

Army’s Mr. Touchdown, senior fullback Sandon McCoy with four TDs this year and 14 the past 14 games, says holes opened on the right side have been so big he has “walked into the end zone.”

Army coach Jeff Monken burst into a jovial laugh over the phone when he heard Hunter’s parents’ nickname for the Black Knights hulking lineman.

“He’s not a softie,” he said. “He’s a fun-loving guy, great to be around. He’s a determined football player.

“He still battles things that are hard to shake when you play the offensive line in this offense. This offense takes a physical toll on the body. I think he’s our most offensive athletic lineman and has really grown as a leader. I’m really, really proud of him and excited for the player he’s become.”

Aside from Hunter’s family nickname, his West Point path is ironic for another reason. He was recruited out of Oceanside High, located in the northern San Diego County city that is home to Camp Pendleton, a Marine base attached to the Navy. And it’s not just Hunter finding a West Point home.

He is one of two Army starters from Oceanside along with senior defensive end Amadeo West. They’ve been friends and teammates since their middle school years, although West was a year ahead of Hunter until 2020.

West, elected team captain at the start of fall camp, is a rare fifth-year senior (the academies don’t redshirt players). His torn bicep injury, surgery and rehab throughout the winter and spring prevented him from completing his West Point “combatitves” physical training by graduation in May. He was granted a waiver to return to West Point for his final classes in the fall; he graduates in December.

Hunter said having his friend at West Point made his decision easier.

“I was originally committed to Cal Poly, but then I got a call from West Point,” said Hunter. “I knew Army was for me on my visit. West Point is the third best engineering school in the world and the cream of leadership institutions in the world. I thought, ‘What better place to challenge myself and become the best version of myself than at West Point?’”

But before West and Hunter, Army gained a foothold on the campus of the San Diego County high school powerhouse through defensive tackle Jordan Smith, an Oceanside alum that played for the Black Knights from 2013 to 2016. He’s a 1st Lieutenant and on track for a promotion to Captain.

All three played for the Pirates’ legendary coach, John Carroll, now retired as a teacher and coach. His Pirates won the 2014 CIF-San Diego Section “Open” Division title to go with 13 CIF division titles. He sent dozens to college, 10 to the NFL and two more pros in the Canadian Football League.

With Smith setting the table, Monken’s recruiters have a head start on recruiting Oceanside players. They already know what kind of coaching and discipline they’ve played under.

“We’ve gotten three guys from that program that are similar,” Monken said. “They’re tough, they’re athletic and they’ve bought into the program. We’re really happy with them. I hope we continue to get the same type of players from Oceanside.”

Hunter credits Carroll for not only developing their college potential but also their ability to succeed under the demands of a service academy. Athletes from Army, Navy and Air Force all like to say the easiest part of their day is football practice.

“What Coach Carroll instilled in all of us sticks with us today,” Hunter said. “He wanted us to lead from the front – lead by example. He expected a lot of us and held us to our highest standards. And if we didn’t play up to that standard, he let us know. That has carried over to West Point very well.”

Carroll no longer has a whistle draped around his neck, but he remains in touch with his players. West and Hunter visited with him for pizza before returning to the academy. Carroll has plenty to be proud of in his career, including lifting Oceanside out of crosstown rival El Camino’s shadow under California legendary coach Herb Meyer. But he ranks the Army trio’s success high on his figurative wall of fame.

“Incredibly proud,” he said, his voice breaking and pausing.

“And then you throw in there are two of them starting at the same time. Jordan Smith led the way for three guys that all have an incredible pedigree. All three were ‘follow me, guys’ They didn’t ask their teammates to do anything they weren’t already doing. They were not only great football players, but guys with character to lead a football team and men. That will carry over into their military careers.”

Hunter’s West Point opportunity – he says Air Force also recruited him but not Navy – allowed him to follow in the footsteps of his parents, who both served as non-commissioned officers. He felt a desire to emulate them but wasn’t sure of what path to take until West Point beckoned.

“I’ve always had a deeper, inner part of me that felt I needed to serve my country,” Hunter said. “It’s what my parents instilled in me.”

Army added Cincinnati on Aug. 26 to fill out a 12-game schedule that had to be reworked due to the COVID-19 pandemic.

The Black Knights were supposed to play BYU last week in a Top 25 matchup. In the AP writers’ poll, Army was ranked No. 22 after the first two weeks and BYU (1-0) No. 21. However, BYU was forced to cancel the game due to COVID-19 infections on the rosters.

This week’s Top 25 added Big Ten schools to reflect the conference’s decision to resume its season next month. Army maintained No. 22 in the AP poll but the Black Knights dropped from No. 25 in the USA Today (coaches) poll to among “others” with 121 points equal to No. 28.

“There’s been plenty of things that our team has done well that I have been proud of,” Monken said in his Tuesday press conference. “Certainly, in the first game, scoring on every drive of that game. In both games, controlling the clock and being able to run the fullback and a power running game. Just to chunk away at the defense and keep that clock running and play our brand of football. There’s been things in every phase.”