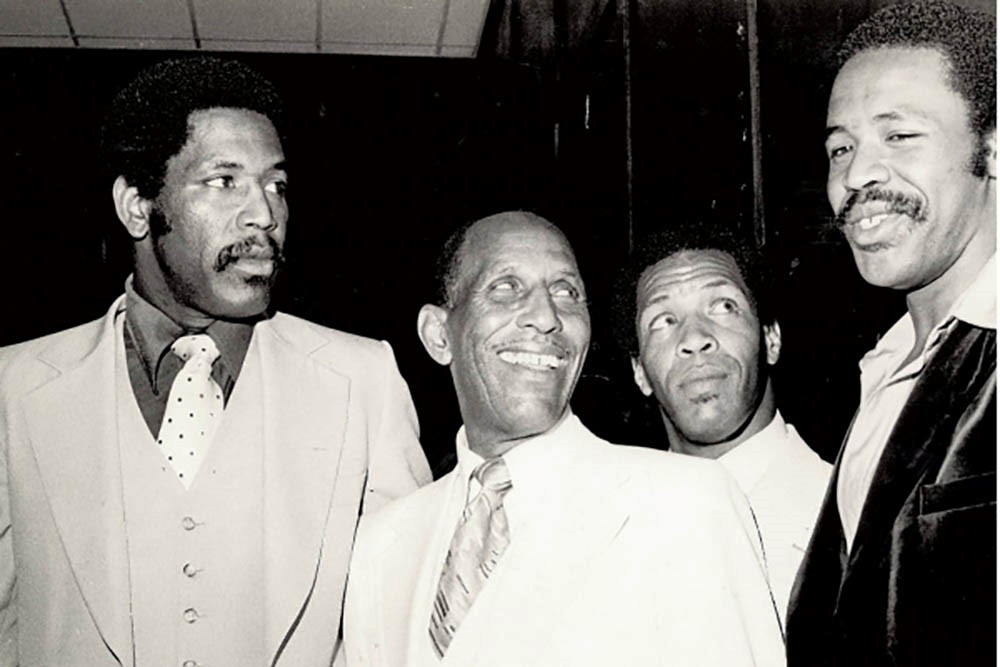 In those troubled times, he was more than a football coach and teacher.

Smith’s career with the Beaumont Independent School District, near Houston, included working as a liaison officer between schools as the district implemented court-ordered desegregation. Upon retirement from a career of overcoming, the district named “Willie Ray Smith Middle School” for him.

This has been one way to honor his legacy in southeast Texas. Another has been the Willie Ray Smith Offensive and Defensive Player of the Year Awards for the area’s top two players among 32 high schools.

At Michigan State, though, Willie Ray Smith is known more simply as the “father of Bubba Smith.”

Connections over time and regions can be fascinating. This story, intended to connect fan bases in southeast Texas and at Michigan State, includes absorbing connected dots.

Thus, Pre-Bubba and Post-Bubba backdrops needed to be painted to tell the full story of Willie Ray Smith Sr. a giant bigger in some ways than is son. His death at age 81 in 1992 followed that of his wife Georgia, who also was a career teacher.

His teams won two Texas black state titles and played in two other finals among 235 career victories. That’s 7.1 wins a year in an era when 10-game seasons were rare.

His record includes sending 20 of his athletes to play pro football and dozens on to college, including his three sons, Willie Ray Jr. (Iowa), Bubba (Michigan State) and Tody (Michigan State/USC). Bubba and Tody also played in the NFL.

But despite Willie Ray Smith’s record, he was an accidental football coach.

Fortuitous because a severe leg injury suffered as a youth left him with a life-long limp that prevented him from playing sports as a kid. He also was unfit to serve in the military as an adult when World War II broke out.

Accidental because the Dunbar football coach had been drafted into the Army. So for the 1942 season, Dunbar’s principal turned to Smith, even though he had never played or coached the sport. Smith prepared for his first season studying football textbooks.

Although that was the extent of his X’s and O’s background, his peers later said he had greater strengths. He gained a reputation as a disciplinarian and a keen eye for talent. He fit his athletes with their best positions.

Moton High in Orange, Tx., had been renamed Wallace High for its principal, Emma Wallace, an esteemed Texas educator and civic leader. She sought Smith to start a football program at her renamed school.

In Smith’s second season, the Wallace Dragons finished as the 1947 state runner-up while competing in the Prairie View Interscholastic League, the governing body for Texas black sports.

That was the first of three straight state final trips capped by winning the state championship in 1949. Wallace won a second state title in 1954. The Dragons drew crowds of 5,000 fans with Black and White spectators attending.

However, when Emma Wallace retired in 1952, friction developed between Smith and the new principal. Smith resigned after five seasons to take the job at Beaumont’s Charlton-Pollard for the next 18 seasons. It turned out to be his highest profile stop with pro talent that included his three sons playing for him.

To have a middle school named for a football coach is exalted status, but one of Smith’s former high school players later felt a football award was needed. In 1992, Jess Phillips, who had played for Smith at Charlton-Pollard on his way to an All-Big Ten career at Michigan State and 10 seasons in the NFL, launched the first Willie Ray Smith Offensive and Defensive Player of the Year Awards.

The award soon gained prestige and has continued the past 28 years.

“The kids call it the Heisman Trophy of southeast Texas,” said Jorge Ramos, a sportswriter at the Beaumont Enterprise.

The 2019 defensive award recipient was junior linebacker Tyrone Brown of West Orange-Stark. He said in a phone conversation the award first captured his imagination as a sixth-grader. That was the 2014 season when future Alabama and Arizona Cardinals defensive back Deionte Thompson won it while playing for Brown’s alma mater, West Orange-Stark.

The Beaumont Founders Lions Founders sponsors the banquet. Vera Sanders, a Beaumont businesswomen and officer of the service club, says it’s a labor of love. She’s 84 and says every year is her “last” until she decides to run it “one more year.” The speakers have included Heisman Trophy winner Herschel Walker and Pro Football Hall of Famers Bob Lilly and Bob Hayes.

“We’ve been fortunate with the speakers that have agreed to attend,” Sanders said. “We’ve had some coaches turn us down because they want an honorarium. We’re a service club, and our budget is to pay for the players, parents and their coaches to attend. It’s an exciting event. We love the tribute video to Coach Smith and hearing the speeches from the players.”

Willie Ray Sr., like his accidental coaching career, became an accidental conductor on the Underground Railroad. It was through his respect for Daugherty, the Spartans’ colorblind College Football Hall of Fame coach.

When Smith’s oldest son, Willie Ray Smith Jr., a running back, had an unhappy career at Iowa, Smith asked Daugherty to take his second son, Bubba.

In Daugherty’s 1974 book, Duffy, he says Smith called him and asked him “to take a chance on my boy Bubba and make a man out of him.”

Despite Willie Ray’s reputation as a strict disciplinarian, Bubba apparently was as rambunctious with his parents in his youth as he turned out to be for Duffy during Smith’s first two unproductive years at Michigan State (one on the freshmen team in 1963 before NCAA’s permitted varsity eligibility).

Bubba ran plenty of disciplinary laps, Daugherty and Smith’s Michigan State teammates say, until the light finally flicked on his junior year, the first of back-to-back consensus All-American seasons. Bubba was the first pick of the 1967 NFL draft on a path to the Pro Football Hall of Fame with a Super Bowl title and two Pro Bowl trips before a knee injury in the 1972 preseason sidetracked his career.

Willie Ray had turned to Daugherty for the trust the Spartans coach established with southern Black high school coaches, starting in the late 1950s. The reputation was born from speaking at a national coaching clinic in Atlanta.

When Daugherty learned Black coaches were denied entry, he put on his own free clinic for them. He continued the practice over the years. Southern Black high school coaches began to lay the tracks to Michigan State’s Underground Railroad. A vast network was born across the south that separated Michigan State from other schools that recruited only a handful of Black athletes.

In those days, a high school coach was the most influential figure in a teen-ager picking his college future.

Another All-Big Ten player in the 1963 class was linebacker Charlie Thornhill of Roanoke, Va. Jimmy Summers was a starting cornerback from Orangeburg, S.C.

Jimmy Raye, a quarterback in the 1964 class from Fayetteville, N.C., was the South’s first Black quarterback to win a national title as a backup in 1965 and starter in 1966.

The 1965 class included Philips, who was one of nine players from the Houston area that Smith sent to play for Daugherty’s 1960s teams.

Michigan State’s fully integrated roster pushed the needle seen by the vast TV audiences for the 1966 Rose Bowl (1965 season) and the 1966 Game of the Century with Notre Dame. The 33 million that tuned for the Nov. 19, 1966 game was a record – seven million more than watched Super Bowl I two months later.

Even schools with a long history of integrated rosters began to follow the example of the Underground Railroad’s rosters:

— In 1960, Minnesota won the national title with five black players.

— In 1966, Michigan State lined up 20 black players with 11 black starters against Notre Dame with one black athlete, Alan Page, in the Game of the Century that ended in a controversial 10-10 tie.

— In 1967, USC won the national title with seven black players. But by 1972, USC’s next national title, the Trojans featured 23 black athletes.

Segregation at many Southeastern Conference schools, including Alabama with coach Paul “Bear” Bryant dragging his feet, lasted into the 1970s – long after the 1954 Brown v. Board of Education Supreme Court ruling and the 1964 and 1965 Civil Rights acts.

The myth that Black and White athletes couldn’t get along in a locker room, one that Bryant protégé Gene Stallings espoused as last as 1965 as Texas A&M’s head coach, began to be ignored.

Smith’s fingerprints were instrumental in laying the tracks to the Underground Railroad along with his fellow southern Black coaches. They are still evident with the high percentage of African-American athletes in college and pro football.

“Willie Ray Smith was legendary,” said Brown, the 2019 Smith Award recipient. “It’s a big honor. It’s as big as it gets.”

David Maraniss, Pulitzer Prize winner and New York Times bestselling biographer: “History writes people out of the story. It’s our job to write them back in.”