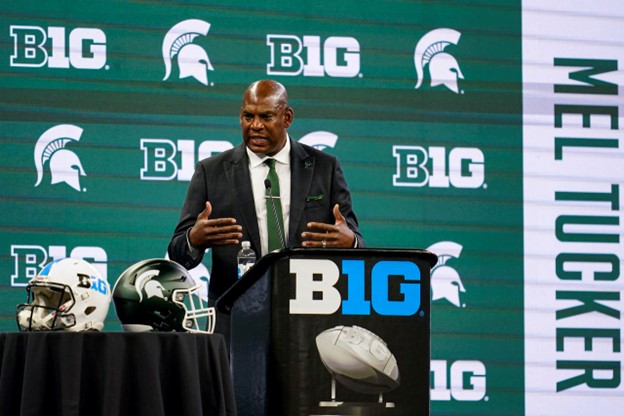 The Big Ten Network crossed into Michigan State territory previously ignored. And in 2022, the Spartans finally had the right messenger to respond insightfully to questions and comments about an otherwise untold story.

Here’s what happened at the Big Ten Media Days Wednesday at Lucas Oil Stadium in Indianapolis.

Revsine, the moderator, mentioned Tucker’s recent trip to Selma, Alabama, with football players Maliq Carr, Tre Mosley and Spencer Brown and women’s track and field athlete Brooke Bogan. The educational journey was sponsored by the conference as part of the “Big Life Series: Selma to Montgomery.”

DiNardo, a former head coach at Vanderbilt, LSU and Indiana and Notre Dame player, suggested such trips should be done every year. Perry, a former Ohio State and NFL player, asked Tucker how he planned to share his experience with the rest of his roster. Tucker offed his thought, agreeing it was an important message to share.

Next, DiNardo interjected, “Especially with Michigan State’s history, right? They started this in this part of the country.” DiNardo’s reference was to Duffy Daugherty’s Underground Railroad recruiting the segregated South to mix with his Midwest-based roster. Daugherty’s 1960s teams were college football’s first fully integrated rosters. The 1966 team played in the Game of the Century against Notre Dame before a record TV audience of 33 million.

“We had 20 Black players on that 1966 national championship team,” Tucker said. “That’s part of our history. The first Black president of a major university (Clifton Wharton, 1970-78); it’s ingrained in who we are. Our players are used to having those types of discussions and so I know they’ll be open to anything I put forth with them.”

Understand this about how poorly Michigan State’s administration and past coaches have recognized the school’s history: Former MSU coaches would have nodded their heads to DiNardo and maybe offered a vague reference. They wouldn’t have cited specifics as did Tucker.

And God forbid, one of them might even have fallen back on the egregious myth Alabama coach Bear Bryant sent players to Daugherty. There is absolutely no truth to that myth. It was told to apologize for Bryant’s history of dragging his feet on integration. Bryant was unaware of Black athletes in the South. As late as 1967, Bryant said on film when asked why he still was still all-white, he replied he couldn’t find any Black athletes academically qualified. Does that sound like a crusader?

Trouble is college football wants to think of Bear Bryant as the heroic John Wayne. The reality is Bryant was indifferent — at best — to integration. Fans don’t want to think of him having such a small heart over the treatment of African Americans under Jim Crow. College football lore has clouded Bryant’s story similar to John Wayne’s Hollywood image. Wayne was criticized for not serving in World War II, but Hollywood cast him as the heroic soldier.

One reason Daugherty’s leadership remains a largely untold story was Duffy wasn’t a self-promoter. Daugherty did because it was the right thing to do — not for attention. His own 1960s White players didn’t understand other schools followed unwritten quotas limiting Black athletes to a half dozen or so. The Spartans played their careers under the assumption the double-digit Black teammates they played with was normal.

Until now, the Spartans never have had a coach/athletic director combination like Tucker and Alan Haller. They get it. Haller announced in April the renovation of Michigan State’s football facility with donated private funds will include a statue recognizing Michigan State’s 1960s history.

That plan is more than a nice story celebrating history. It also ameliorates the curious 2013 decision to honor two out-of-state schools with a marker outside of Jenison Fieldhouse without any such recognition of Daugherty’s historic 1960s teams.

Michigan State marked the 50th anniversary of college basketball’s 1963 NCAA Mideast Regional played at Jenison Fieldhouse. That season Loyola Chicago, with four Black starters, defeated Mississippi State, a segregated team that defied a state order not to play in the game, in the semifinals. A marker was placed outside Jenison to honor the Civil Rights progress. The game was certainly a historical moment, but Michigan State’s only association was coincidental as the host.

Three years later, Michigan State athletic department failed to mark the 50th anniversary of the 1966 Game of the Century against Notre Dame played on Nov. 19 at Spartan Stadium 80,011 fans in addition to the vast TV audience. The University Archives Historical Collections, to its credit, sponsored a panel discussion about Michigan State’s leadership, but the event flew under the public radar. It wasn’t covered by the media without the university promoting it.

As Tucker noted to DiNardo, in the 1966 season the Spartans were college football’s future with 20 Black players, 11 Black starters, two Black team captains, College Football Hall of Famers George Webster and Clinton Jones, and the South’s first Black quarterback to win a national title, Jimmy Raye of Fayetteville, N.C.  Notre Dame was the past with one Black player, the great Alan Page.

Another reason Daugherty’s leadership remains a largely untold story has been TV networks rely on superficial research repeating the story of the 1970 USC-Alabama game. The myths weren’t crafted until 20 years after the game, but outlets regurgitating the myths have successfully cast Bryant as a crusader. A consequence has been shoving aside the true 1960s pioneers who made it possible to play the 1970 USC-Alabama game without incident.

I believe that myth hung over the 2014 Big Ten Media Days, when I presented DiNardo with a copy of my book with Jimmy Raye published that season:

I explained to DiNardo this was an untold story. He smiled without saying anything as he took the book. I don’t know if he ever read it. Maybe he handed it to a summer intern.

But, thankfully, DiNardo brought up Daugherty’s leadership in 2022.

The messenger makes a difference. And Michigan State finally has Mel Tucker as the right messenger.

I will put my Duffy vs. Bear research on college football integration up against anybody, anytime, anywhere.